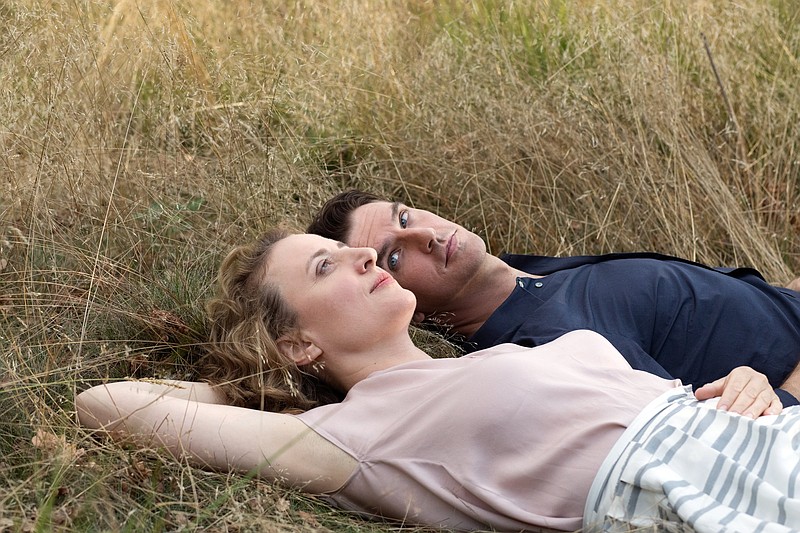 A mere surface reading of Maria Schrader's new film "I'm Your Man" makes it sound like a daft and disposable sci-fi rom-com, bubbling with the kind of flaky superficial schmaltz that can be easy to dismiss and hard to endure. As it turns out, this high-concept romantic fantasy is a smart, thoughtful and affecting genre blend. I went into it more curious than captivated, but within 15 minutes Schrader had me firmly under her spell.

Working from a short story by Emma Braslavsky, Schrader and her co-writer Jan Schomburg bring some understated humor and a generous amount of heart to this German-language tale. But what's most surprising is how deceptively sensitive and insightful the story turns out to be. It may be built around a quirky premise, but "I'm Your Man" poses a number of soul-searching questions and counts on us for the answers.

Though science-fiction is inherent to its setup, the story is more of a romantic dramedy set in our current day. The film stars Maren Eggert as Dr. Alma Felser, an archaeologist for Berlin's Pergamon Museum. The story opens with Alma arriving at a nightclub that seems plucked out of time. Inside a jazz band's rendition of "Puttin' on the Ritz" fills the room as couples romantically dance and dine in the cozily lighted cabaret.

The hostess escorts Alma to a table near the dance floor where a handsome gentleman introduces himself as Tom (Dan Stevens). "You're a very beautiful woman Alma," he smoothly purrs as he slides his hand over hers. "Your eyes are like two mountain lakes I could sink into." If that sounds sappy it's for good reason. You see, Tom is an android and after ordering the perfect wine, perfectly quoting Rilke, and dancing the perfect Rumba, the robot loverboy glitches leading a trio of frantic gray-suited techs to whisk him away for maintenance.

It turns out Alma has been chosen to test-drive a new android prototype and this was their introduction. Once Tom is fixed, Alma is to take him home for a three-week trial period, reporting her findings to an ethics committee afterward who will then determine whether the models make for good life partners. Should they be allowed to work, marry or get passports? Will they be entitled to human rights or are they just machines?

After the nightclub debacle, Alma tries to wiggle out of the program, but her boss Dean Roger (Falilou Seck) quickly reminds her of her agreement. "Being single is a prerequisite," he says unintentionally highlighting her lonely state. "Everyone else either has a family or a partner." So she reluctantly takes Tom home, which is where Schrader's bigger interests really come front and center.

Once at her flat the movie uncoils into a more sincere version of "The Odd Couple" with Alma wanting nothing to do with her robotic Romeo and Tom (following his programming) attempting to ingratiate himself. He tidies up the place and fixes extravagant meals much to her chagrin. He even prepares her a bath complete with candles, rose petals and champagne. "93% of German women dream of this," he computes. "And guess which group I belong to," she snidely replies.

Typing this reminds me of how weird and even a bit creepy it all sounds. But the film reaches a point where Schrader subtly pulls us inside Alma's head space and all of the wacky setup becomes an afterthought. In its place we're treated to a touching exploration of loneliness that actually wrestles with our need for human connection, companionship, emotional support, and fulfillment in a meaningful way.

While the keen direction and well-written material is key, the film's biggest pleasure may lie in the two lead performances. Together Eggert and Stevens have a charming chemistry, but it's what they bring individually that makes their characters work. There's an understated beauty to Eggert's performance as she takes Alma from cranky skeptic to aching lost soul. Stevens, with his perfectly combed hair and sparkling blue eyes, is a perfect mix of suave sophistication and dopey innocence. He has the trickier role while hers is the more emotionally demanding. Both are terrific.

As you can probably guess, over time Alma warms up to Tom and her apathy turns to curiosity and then later to compassion. But Schrader doesn't wander down the conventional route for very long. There's a degree of incertitude behind nearly every scene and each scenario seems anchored to a question. Take when Tom tries to convince Alma to share more about herself. The more she shares the more his algorithm will adjust to her desires. He'll become the proverbial "perfect man" -- one fine-tuned (literally) to her specifications. But can she truly love someone who's really nothing more than a self-programmed extension of herself?

These are the type of heartfelt considerations baked into "I'm Your Man," a movie that probes the essence of humanity -- its meaning, its parameters, its imperfections. A movie that examines human relationships -- how we define them, what we expect from them, and where we'd be without them. Yes, the film can be slyly funny and Schrader has a good time hacking away at numerous worn-out romantic comedy tropes. But go into it expecting more. Look beyond the surface. You just might be surprised at what you find. I know I was.

In German with English subtitles