OPINION | REVIEW: 'No Time to Die' 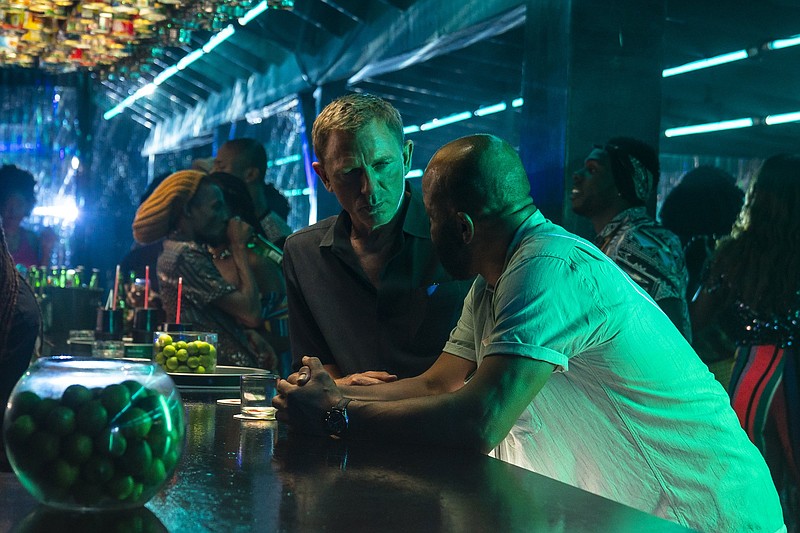 A retired James Bond (Daniel Craig) is called back to service when old CIA friend Felix Leiter (Jeffrey Wright) asks for help tracking down a mysterious villain armed with dangerous new technology in “No Time to Die.”

Amid the furor and debate over who might be the next James Bond, with the announcement that this film really and truly was the swansong for Daniel Craig (he having made four previous installments over the course of the last decade and a half), Cary Joji Fukunaga's long-awaited Bond film already gives us a new 007, by the name of Nomi.

She's played by Lashana Lynch, a striking Black woman whose character comes with a sizable chip on her shoulder about the previous holder of the license to kill. It's an interesting twist to the reliably male-centric Bond franchise, one that could lead into some intriguing places. Alas, as with many other elements of Craig's send-off, it's yet another potentially compelling idea that ends up going nowhere in particular (before the last act, Nomi inexplicably requests of her boss -- the redoubtable M (Ralph Fiennes) -- that the 007 moniker be restored back to Bond instead).

This is, perhaps, what comes of a film with no fewer than four credited screenwriters, one of whom being Phoebe Waller-Bridge, with competing ideas about what the film should be and how to get there. At a blanching 163 minute run time, all the many bits and pieces fail to hold together very credibly, giving us almost three hours of Bond fan-service -- bringing to bear the weapon-centric Aston Martin, the Walther PPK, his catchphrase, and a special-weaponized watch that sends out an EMP wave when activated -- en route to a dramatic, if nonsensical, ending to the Craig-era 007.

The Craig era has largely been successful -- critically and financially -- on the strength of the seriousness with which they were articulated. From Martin Campbell (director of 2006's "Casino Royale," the first film in this iteration); to Marc Forster ("Quantum of Solace"); to Sam Mendes ("Skyfall," "Spectre"), the unifying thread, apart from the cast, was the high-production values, and the dispensing of the character's more objectionable misogyny and smarminess. Craig wasn't a debonair playboy with a gun, a la Roger Moore, he fashioned his interpretation on the more serious-minded early films with Sean Connery, minus the grating female condescension, in what proved to be a winning formula.

This series has also been willing to dig much deeper into the mythos of the character, unearthing his childhood, and bringing to bear the weight of his being constantly betrayed by everything and everyone he holds dear -- all of which built up neatly into the previous films, "Skyfall" and "Spectre," in which Bond finally got to confront first, Silva (Javier Bardem), the agent of chaos and maliciousness who had been ransacking his life for years; and Blofeld (Christoph Waltz), the leader of a sinister outfit hellbent on destroying MI6 from within -- until, at last, he really had nothing much left to fight for.

That feeling of anti-climax pervades this film, which finds Bond, still hurting from being seemingly betrayed by his true love, Madeleine (Lea Seydoux), years before, being lured out of a reclusive retirement once again, at the prospect of dismantling SPECTRE for good. There's a palpable sense that the producers likely went one too many with the series, especially with a star in Craig, seemingly relieved to finally have his number retired.

The film has a plot, of course, a confusing mishmash of ideas involving the development of a DNA-specific toxin, an ill-advised program overseen by M that naturally falls into the wrong hands, in this case, that of a twitchy billionaire recluse named Safin (Rami Malek), whose life-story jibes with Madeleine's, in ways that seem, shall we say, a bit far-fetched. All of which leads Bond from one stunning international location to another -- including stints in Norway, Jamaica, Italy, and the Faroe Islands -- battling heavies, as he weaves his way to the remote island compound where Safin lies in wait for him, for a final confrontation that answers all questions (many of which we never bothered to ask), and turning off all the lights on its way out the door.

Despite the script's schizophrenia -- it begins in 1995, as a young girl is terrorized by a home invasion that leaves her mother dead; jumps ahead a couple of decades to picturesque Italy, as Bond and Madeleine enjoy happier times ("We have all the time in the world," Bond assures her, as an idyllic setting sun lights up their faces in an orange glow, the absolute kiss of death for any couple in a spy flick); before jumping ahead once again, to the present day -- and general sloppiness (there are more holes and ruts here than at a municipal golf course), at least it still maintains a strong visual panache.

Fukunaga has always had a penchant for arresting visuals, and working with DP Linus Sandgren (Damien Chazelle's long-standing cinematographer), the imagery is fetching even as the myriad story beats work against it. The film's opening coda, in which an assassin approaches a wintry farm house from across a glade, is so well designed and constructed -- a long shot from inside the house, through the plate glass upper window, in which we see both the house's occupants and the approaching danger coming from outside, is a showstopper -- it lends hope that the whole enterprise will meet its high standard.

But, alas, even the exotic locales (excellent location work from the production team), exciting visuals, and a most welcome, high-level cast (including Naomie Harris, Ben Whishaw, Jeffrey Wright, and Ana de Armas), can't save the film from its overhanging, glaring weakness: superfluousness.

Rating: PG-13 (for sequences of violence and action, some disturbing images, brief strong language and some suggestive material)