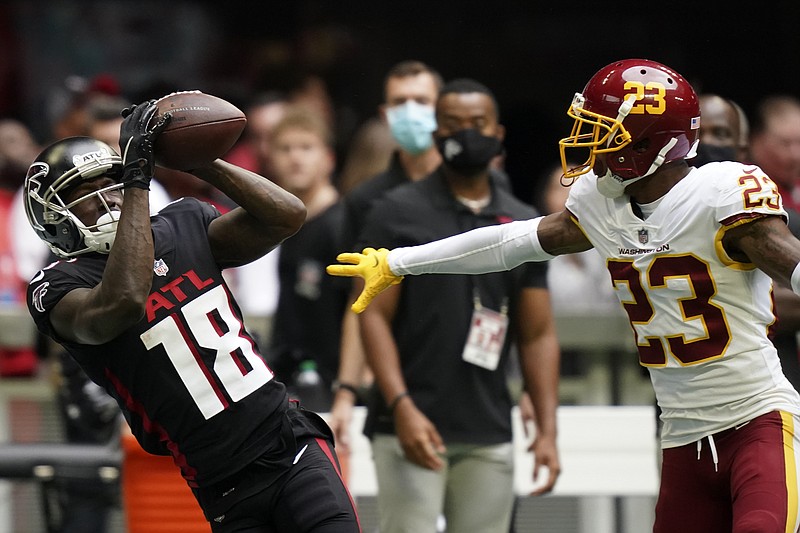 Falcons' WR out vs. Jets

Atlanta Falcons leading receiver Calvin Ridley will not play in Sunday's game against the New York Jets in London for personal reasons. After Ridley was not present for Thursday's practice, the Falcons announced Ridley would not accompany the team to London "due to a personal matter." The Falcons will be limited at the position as Russell Gage will miss another game with an ankle injury. Ridley leads Atlanta with 27 catches for 255 yards. He has only one touchdown reception. Ridley had seven catches for 80 yards, but had two drops in last week's 34-30 loss to Washington.

Broncos' QB back at practice

Teddy Bridgewater's chances of playing at Pittsburgh this weekend improved dramatically Thursday when he returned to practice four days after suffering a concussion against the Baltimore Ravens. Bridgewater worked with the starters and was listed as limited on the injury report. He remains in the NFL's concussion protocol. Bridgewater left the Broncos' 23-7 loss to the Ravens at halftime after taking a helmet to his chin from Ravens rookie pass rusher Odafe Oweh. The hit wasn't flagged. Nor was a whistle blown on the previous play when wide receiver/kick returner Diontae Spencer suffered a chest injury when he was hit by cornerback Tavon Young. Coach Vic Fangio argued both should have been whistled, Oweh for a high hit on the QB and Young for hitting a defenseless receiver.

The New York Jets and defensive end John Franklin-Myers agreed to terms on a four-year contract extension Thursday night, according to a person with direct knowledge of the deal. The 25-year-old Franklin-Myers is one of the Jets' young standouts on their defensive line, which has been a strength of the team. Financial details were not immediately available.

Jin Young Ko put a tough loss behind her quickly and ran off six birdies over a seven-hole stretch on the back nine for an 8-under 63 on Thursday to build a three-shot lead in the Cognizant Founders Cup. in West Caldwell, N.J. It was her 11th consecutive round in the 60s, three short of the record that Annika Sorenstam set in 2005. Sandra Gal had a 66 despite not making birdie on any of the par 5s at Mountain Ridge. The large group at 67 included Nelly Korda, the No. 1 player in women's golf who had not played since the Solheim Cup a month ago, U.S. Women's Open champion Yuka Saso and two-time major champion So Yeon Ryu. The first round was suspended by darkness because of a 90-minute delay Thursday morning due to fog. Thirty players didn't finish the round. The best score of those was Moriya Jutanugarn at 3 under through 15 holes. Maria Fassi (Arkansas Razorbacks) is at 3-under 68. Gaby Lopez (Razorbacks) turned in a 2-over 73. Stacy Lewis (Razorbacks) shot a 4-over 75.

Sung Kang found the missing piece to his game and put everything together Thursday in the Shriners Children's Open in Las Vegas for a 10-under 61 that gave him a two-shot lead after the first round. Kang already had nine birdies against one bogey when he hit 7-wood from a fairway bunker to 18 feet on the par-5 closing hole at TPC Summerlin and made the eagle putt. Sungae Im made five consecutive birdies on the back and, along with an 8-foot eagle putt on No. 9 at the turn, shot a 63. He was joined by Charley Hoffman and Chad Ramey, who birdied all but two holes on the back nine. Matthew Wolff, who lost in a three-many playoff last year at the TPC Summerlin, was among those at 64. Former University of Arkansas golfer Taylor Moore shot a 5-under 66. Andrew Landry (Razorbacks) was at even-par 71.

Rahm in hunt at Madrid

Back in front of his home crowd for the first time in nearly two years, Jon Rahm didn't let them down. The top-ranked golfer got off to a fast start on his return to Spain, shooting an 8-under 63 in the first round of the Spanish Open in Madrid on Thursday to sit in third place. Rahm was at 6 under after his first eight holes before making his only bogey and then finished with three more birdies on his back nine. Rahm, who started on the 10th hole, was two shots behind clubhouse leader Ross McGowan, the Englishman who was even more impressive with eight birdies and an eagle in a course-record round of 61 at the Clube de Campo Villa de Madrid. Rahm also had an eagle on his front nine, at the par-5 14th hole. He was outdone by countryman Sebastian Garcia Rodriguez, who was one shot off the lead after making only one bogey in his round of 62.

Irad Ortiz Jr. rode his 3,000th career winner Thursday in the fifth race at Belmont Park. The 29-year-old jockey from Puerto Rico rode Saratoga Kisses to an 8 1/4-length victory for trainer and co-owner Rudy Rodriguez. Ortiz is 15th on the career earnings list, totaling over $220 million in purses since his career began in 2011. According to racing database Equibase, Ortiz's total wins include 92 from Puerto Rico. He has won three consecutive Eclipse Awards as the nation's top jockey, having led all North American riders in wins and earnings every year since 2017.

Kim Clijsters lost in three sets in her first-round match Thursday at the BNP Paribas Open in Indian Wells, Calif. She was beaten 6-1, 2-6, 6-2 by Katerina Siniakova, a three-time major doubles champion from Czech Republic. Siniakova teamed with countrywoman Barbora Krejcikova to win a gold medal in doubles at the Tokyo Olympics. Clijsters, a 38-year-old Hall of Famer on the comeback trail, also lost in the first round at the WTA Tour stop in Chicago last week. The four-time major champion and mother of three originally came back last year, but her attempt was interrupted by knee surgery last October and a bout with covid-19 in January. Clijsters committed nine double faults against Siniakova, who converted six of nine break points in the match. Clijsters received a wild-card into the tournament she won in 2005 and 2003.

Canadiens goaltender Carey Price has voluntarily entered the NHL/NHL Players' Association joint player assistance program, a stunning announcement Thursday less than a week before start of the season and just three months after the former NHL MVP backstopped Montreal to the Stanley Cup Final. The league and players' union said the 34-year-old Price will be away from the team while he takes part in the program. The union did not specify why he entered the program, but Price's wife, Angela, cited mental health as a reason in an Instagram post showing Price and their three children. Canadiens General Manager Marc Bergevin said Price would be in the program for at least 30 days. He said the news caught him by surprise, but he encouraged everyone to seek help when needed. The issue of mental health among professional and amateur athletes has grown in prominence over the past year, with tennis star Naomi Osaka and Olympic champion gymnast Simone Biles among those both citing it as the reason they stepped away from certain competitions or events. 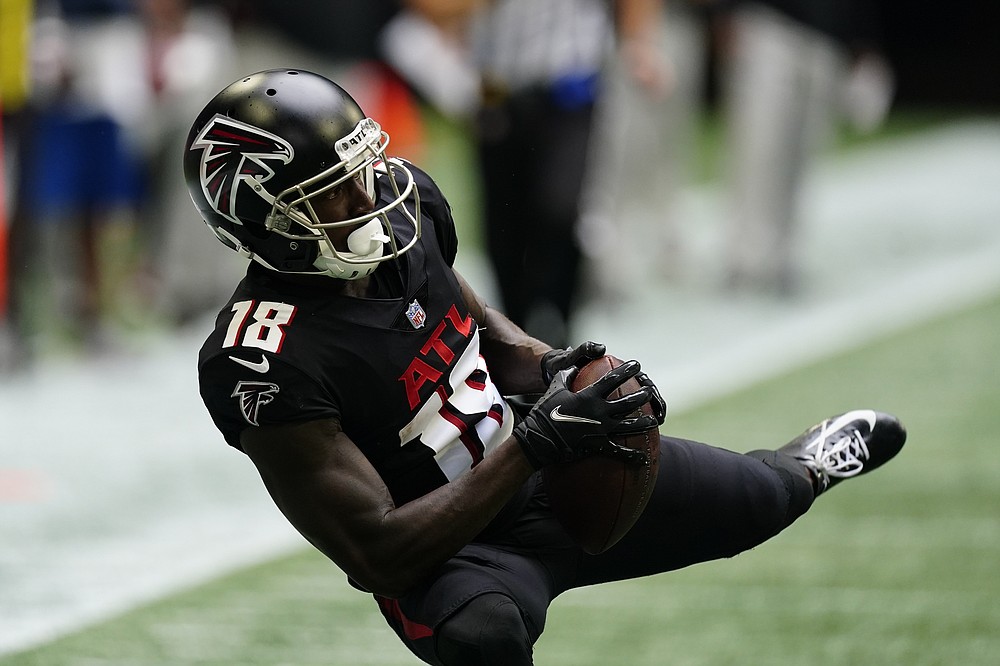 Atlanta Falcons wide receiver Calvin Ridley (18) makes the catch against the Washington Football Team during the second half of an NFL football game, Sunday, Oct. 3, 2021, in Atlanta. (AP Photo/John Bazemore)