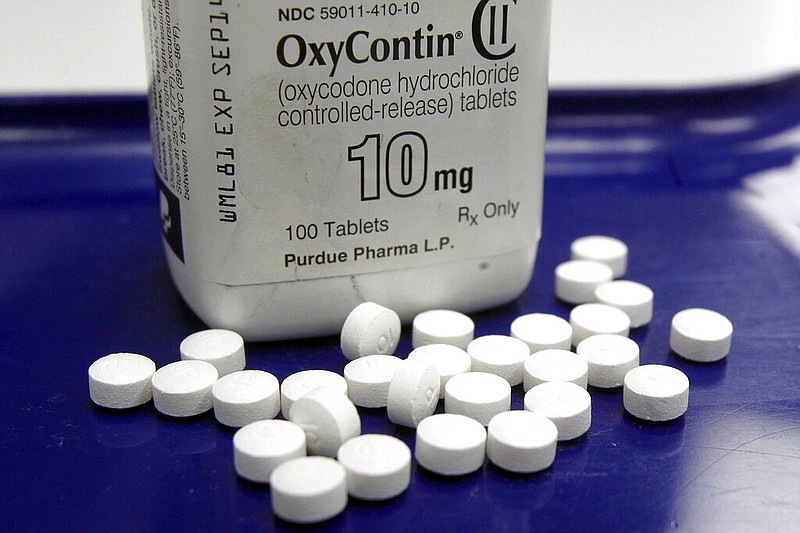 This Feb. 19, 2013, file photo shows pills of OxyContin, a form of oxycodone sold by Purdue Pharma, arranged for a photo at a pharmacy in Montpelier, Vt. (AP/Toby Talbot, file)

Arkansas Attorney General Leslie Rutledge along with leaders representing cities and counties announced an agreement Thursday to work together to distribute the $216 million the state received from a settlement with opioid manufactures and distributors.

The agreement, announced at Rutledge's office in Little Rock, ends a legal clash between the attorney general's office and groups representing cities and counties in the state, as both vied to take the lead in court.

But with the state's $216 million settlement with opioid manufactures and distributors being announced in July, the spat between the Rutledge and the Arkansas Municipal League and Arkansas Association of Counties came to an end.

Flanked by more than two dozen mayors, county judges and police chiefs, Rutledge said the announcement was "an incredible day for the state of Arkansas to get us the resources we need to combat the opioid epidemic."

Under the memorandum, the $216 million will be split among the state, cities and counties to first pay attorneys fees. Then the money will be pooled together in the same pot where a state commission will decide how to divvy up the money.

"Almost immediately we realized there was more power in us working together as a group," said Chris Villines, executive director of the Arkansas Association of Counties.

The commission, which will likely be formed by the Arkansas Legislature, will be bound by federal restrictions on how the money can be spent.

Without mentioning specifics, Rutledge mentioned some of the settlement money would go toward drug education, prevention and outreach programs, and on Naloxone, a drug used as an emergency treatment for opioid and other overdoses.

The settlement money also will go toward repaying Medicaid funds affected by the opioid crisis, according to a news release from the attorney general's office.

Mark Hayes, executive director of the Arkansas Municipal League, said the state, city and counties had to come together on the settlement because "we couldn't do it individually."

Before Thursday's announcement, the attorney general and the Arkansas Municipal League and Arkansas Association of Counties had previously clashed over jurisdiction and how to best target opioid makers and distributors in court.

After Rutledge and the Arkansas Association of Counties and Arkansas Municipal League couldn't come to an agreement they filed separate lawsuits.

"We may have our own lawyers, but we all have the same cause," Rutledge said.

With the settlement agreement announced in July, the legal battle was over, clearing the way for cooperation between the state, counties and cities.

According to the memorandum of understanding announced Thursday, the settlement money will be evenly split between the state, cities and counties.

For the counties and cities share, 27 % of it will be put into an account to pay for legal fees with the rest going to a large pot shared among the three groups.

The state will first spend its share on Medicaid Claw Back and counsel.

Despite heightened awareness about the addictiveness of prescription painkillers, Arkansans are still dying from opioids and similar drugs with a 40% increase in overdose deaths in 2020, according to the Centers for Disease Control and Prevention. The drug that led to the most overdose deaths in Arkansas in 2020 was fentanyl, a synthetic opioid.

Gina Allgaier, founder of Speak Up About Drugs, formed the group after her son Tristan Thomas died of an overdose in 2017 from street drugs that were unknowingly laced with fentanyl, she said.

Allgaier placed the blame at the pharmaceutical companies for fomenting the addiction crisis because they "peddled these addictive drugs" without disclosing how addictive they can be.

"I come from corporate America. I come from marketing. These drug companies marketed too hard and they sold too many drugs to too many people with catastrophic effects," Allgaier said.

For Hayes, the opioid crisis is also personal. He mentioned how his stepson died last year from an opioid overdose.

"It is a plague in this state and we are losing a generation of people," Hayes said. "We cannot fix this problem with just money. We have to have a plan of action united across this entire state."