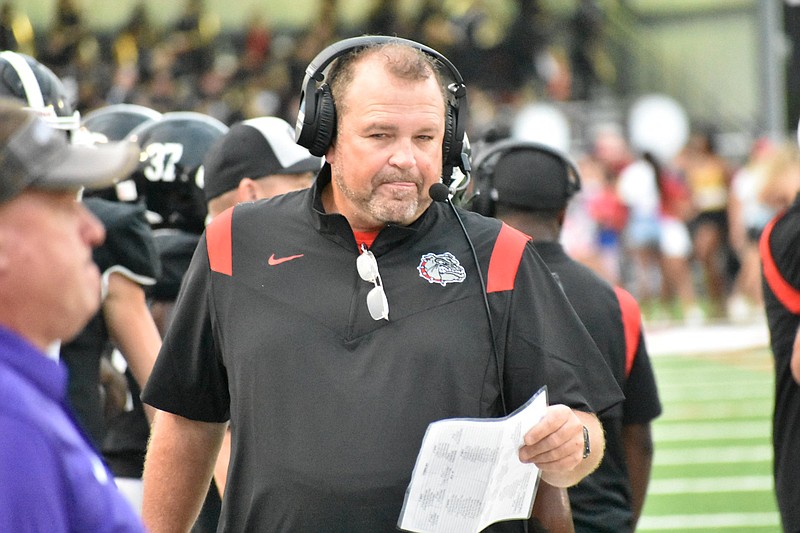 Bobby Bolding’s White Hall defense has not allowed teams to score a point on them at Bulldog Stadium this season. (Pine Bluff Commercial/I.C. Murrell)

"I think they're going to be on an emotional high," the first-year head coach and former University of Arkansas wide receiver said. "They're just coming off a big road win at Little Rock Christian. We just have to execute our game plan."

But whatever excitement was supposed to brew from White Hall's 14-10 win last week at Little Rock Christian Academy did not spill into the voice of Bulldogs Coach Bobby Bolding.

"I'm surprised how poorly we played on offense," Bolding said. "Assignment issues, personnel problems, penalties, not enough timeouts ... it was ugly. We didn't play well. We drove down the field and fumbled once inside the 20 and once inside the 15."

Next up for Bolding's bunch are Lucas' No. 1-ranked Bruins (4-1, 1-0), the reigning 5A champions who have won state in six of the past seven years. Kickoff is set for 7 tonight.

"We're going to go into a very hostile environment," Lucas said. "White Hall has always been tough, even before I became the head coach."

White Hall's defense has made Bulldog Stadium an even tougher venue.

The highest-scoring team in Arkansas at 55.6 points per game, Pulaski Academy is going into a place where White Hall has yet to allow a single point from the opposition. The Bulldogs have outscored Sheridan, Warren, Drew Central and Jacksonville by a combined 163-0, all at home this season.

"They're very solid," Lucas said of White Hall. "They do what they do. They're tough on the defensive line. They're monsters."

But Bolding is aware the Bruins, who have scored 60 or more points in each of their wins, are a much different challenge.

Senior Charlie Fiser has thrown for 1,611 yards and 21 touchdowns. His top go-to receiver is junior Jaylin McKinney, who has 30 catches for 564 yards and seven touchdowns to his name.

Northwestern University commit Joe Himon, a senior, has run for 643 yards and 13 touchdowns. Himon has also caught 27 passes for 290 yards.

Taking over for Kevin Kelley, now the head coach at South Carolina's Presbyterian College, Lucas said it hasn't been a challenge to maintain Pulaski Academy's explosiveness on offense.

"It hasn't been because we haven't changed anything," Lucas said. "The kids are accustomed to running this system. We added a few wrinkles, but other than that, we do what we do. We don't want to change it. We want to keep the intensity up on offense and defense."

But to contain the Bruins' offense, Bolding said, the Bulldogs' defense must "get bodies" to Himon when he has the ball.

The Bulldogs are aware of the Bruins' propensity for onside kicks throughout the game, so Bolding has placed extra focus on such trickery.

"We have to recover onside kicks," the three-time state championship coach said. "We try not to let them score. If we don't recover an onside kick, that's like committing a turnover. Play better offensively. Get first downs. Score touchdowns and don't turn the ball over. PA will score. We just have to limit how much they score."

Coming off a struggle against LRCA, Bolding is keeping the message to his team about slowing down perennial power PA simple.

"Let's get better offensively and keep playing defense," Bolding said. "Let's tackle and don't get the ball thrown over our heads."

All games begin at 7 tonight