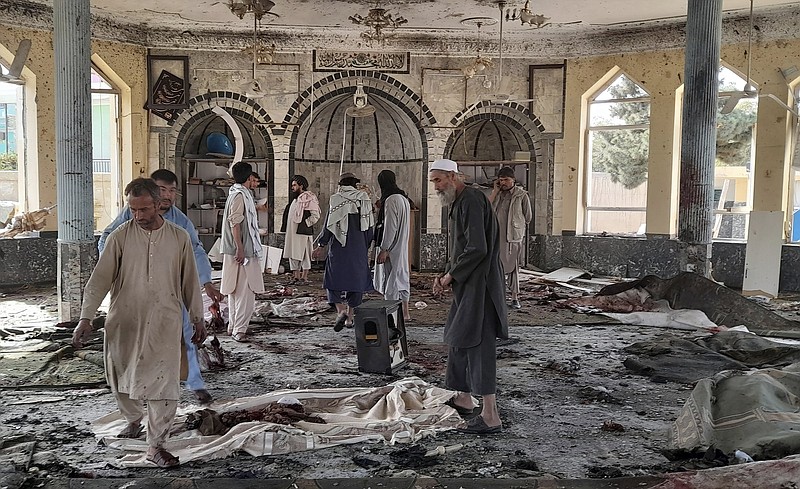 People view the damage inside a mosque Friday after a bombing in Kunduz province in northern Afghanistan. More photos at arkansasonline.com/109kunduz/. (AP/Abdullah Sahil)

KABUL, Afghanistan -- An Islamic State suicide bomber attacked a crowded mosque during Friday prayers in northern Afghanistan, killing nearly 50 Shiite Muslim worshippers and wounding dozens more, the latest in a string of attacks on religious facilities and the deadliest since U.S. troops exited the country in August.

"I saw more than 40 dead bodies lying around," said Ghausuddin, a 60-year-old engineer who arrived at the mosque minutes after the blast and spoke on the condition that only his middle name be used, for his safety. "There was blood everywhere. In every family, one or two people were either injured or killed."

The suicide bomber walked into the male section of the Sayed Abad Mosque in Kunduz and detonated his explosives, witnesses said. All of the victims were members of Afghanistan's Shiite Hazara minority, long persecuted by Sunni Muslim extremist groups, including the Taliban. Bilal Karimi, the deputy Taliban spokesman, said Friday night that the blast had killed 46 worshippers and injured another 143.

The Islamic State-Khorasan, the Afghanistan branch of the Syria- and Iraq-based network, claimed responsibility for the attack late Friday in a statement issued on its Amaq news channel.

The bombing came five days after ISIS-K claimed that it had orchestrated a bombing outside a Kabul mosque Sunday, killing at least two people, during a memorial service for the mother of the Taliban's acting deputy information minister and main spokesman, Zabihullah Mujahid.

ISIS-K has emerged as the biggest threat since the Taliban seized control of Afghanistan in mid-August. In late August, ISIS-K claimed responsibility for a suicide bombing at Kabul's international airport that killed 13 U.S. service members and about 170 Afghan civilians, capping the end of America's longest war after two decades in Afghanistan.

Since the U.S. withdrawal, the two groups have engaged in deadly tit-for-tat attacks in several parts of the country. ISIS-K has claimed that it was behind a series of blasts in the eastern city of Jalalabad targeting the Taliban. Afghanistan's new rulers, in turn, have been going after suspected and former ISIS-K members in a spate of reprisal killings.

On Friday, some Hazara residents of Kunduz said they fear they have now become a part of this deadly contest for power and authority in the new Afghanistan.

"The Shia people are stuck in a war between the Taliban and the Daesh," said a Hazara community leader in Kunduz, using the Arabic acronym for the Islamic State, and speaking on the condition of anonymity to talk freely without reprisals from either side.

The Taliban on Friday sought to defuse the tensions, calling Hazaras their comrades.

"This afternoon, an explosion took place in a mosque of our Shiite compatriots ... a number of our compatriots were martyred and wounded," Mujahid, the spokesman, said in a tweet.

The Taliban, he added, has deployed "a special unit" to investigate the bombing.

The United Nations mission in Afghanistan condemned Friday's attack in a tweet, saying initial reports indicated "more than 100 people killed and injured in a suicide blast inside the mosque." In a second tweet, the U.N. said, "Today's incident is part of a disturbing pattern of violence: 3rd deadly attack this week apparently targeting a religious institution."

In addition to the Kabul mosque bombing, there was an attack on a religious school in Khost province that is so far unclaimed, said the U.N.

Some accounts placed the number of dead as high as 100, but hospital officials, community leaders and witnesses said at least 50 were killed, though the death toll was expected to rise. The Doctors Without Borders hospital received 21 bodies and 99 wounded, all of them men.

Many had serious burn injuries and loss of limbs, and were in need of urgent surgery, said Esmatullah Esmat, the deputy for medical activities at the charity. "Most had multiple injuries," he said. "This was a bomb blast where we can find 20 wounds in a single patient."

Information for this article was contributed by Mohammadullah Aryen and Haq Nawaz Khan of The Washington Post.