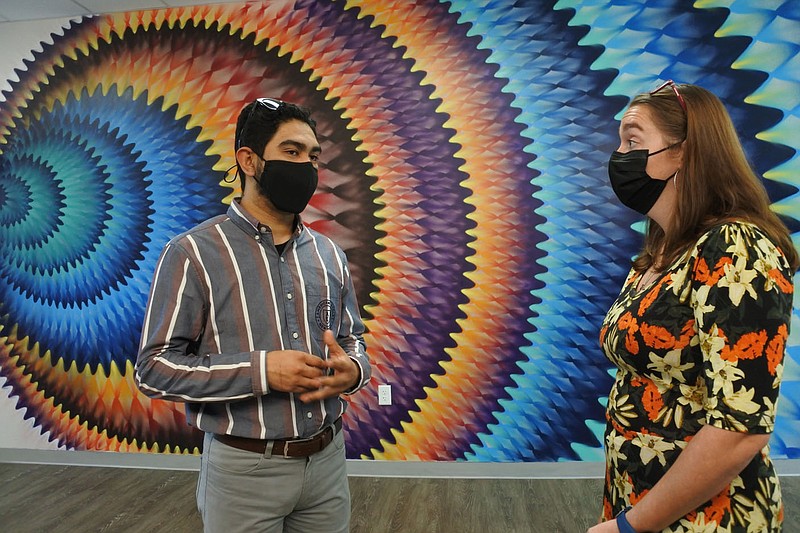 The Future School of Fort Smith held a ribbon cutting for a new building on its campus Friday.

Superintendent Boyd Logan said the project, which cost about $6 million, allowed the school to teach freshmen when the school year started Aug. 18. The school only served sophomores to seniors before with the aid of a modular, six-classroom building on site.

The school opened Aug. 22, 2016. The school is centered on a "personalized approach to learning via student-designed internships, personalized learning plans, and an adviser for each student," according to its website.

"Now we have kids coming out of middle school with a sense of wonderment about who they are and the opportunities that lie open to them with a brand new blank slate," Montiel said. "So that's been really fun to help get to know them, them get to know themselves and help shape their futures."

Logan said he believes the expansion gives the school "a permanently established site" where it can deliver its education model for the community while being strategically in downtown Fort Smith.

Construction on the expansion project began August 2020, Logan said. The new building is about 18,000 square feet, the majority of which is taken up by 16 new classrooms. This brings the school's total number of classrooms to 20, with the project also renovating two of its existing classrooms.

School officials envision being able to serve 400 students across four grades due to this project, according to Logan. It projects being able to hit this mark within two years.

Logan noted the project also moved the entrance of the school to face North F Street, toward the business community in downtown Fort Smith. He said the school, with its student internship program, is thinking about the revitalization of that part of the city.

"Before, we were oriented towards more of a residential area," Logan said. "It invites the business community into our school, into this entrance, as well as keeps our focus towards that downtown business community."

Steve Clark, a board member who is also the chief executive officer and founder of Propak, a company based in downtown Fort Smith, said the school's expansion is a demonstration of its health. He believes the school's internship program can create relationships between students and local businesses that will make it more likely for these students to keep working in the area, rather than leaving for outside markets.

Logan said money for the expansion came from donations and grants from the Fort Smith-based Dream Alliance, the Arkansas Public School Resource Center, the Windgate Foundation and the Walton Family Foundation, as well as a loan through Civic Builders in New York.

The school postponed the ribbon cutting to Friday to take care of certain "punch list items" related to the project, Logan said. Some such items still have to be worked through before the project can considered complete.

Around 275 students are currently enrolled in the Future School of Fort Smith.