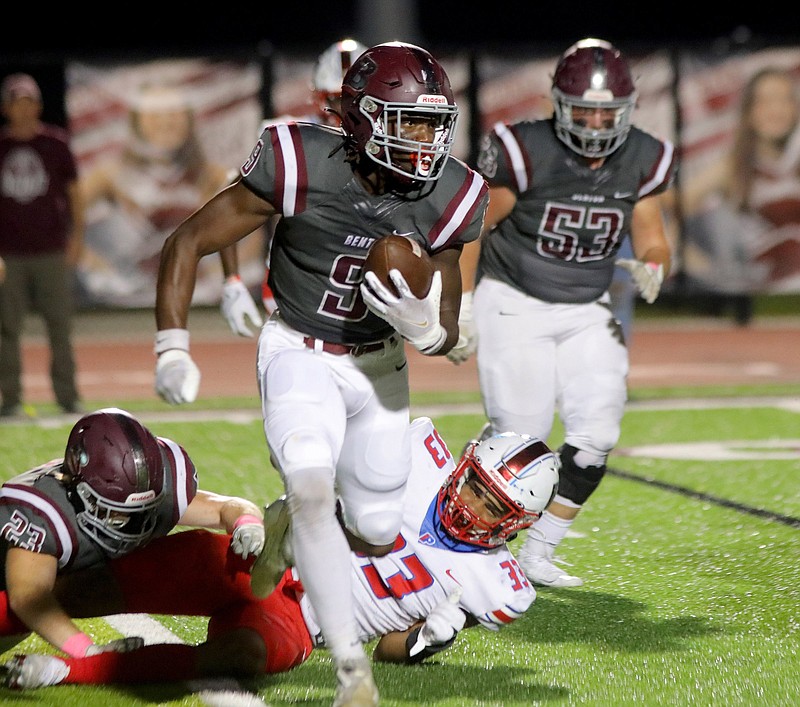 Benton’s Casey Johnson (9) finds running room during the first half Friday against Little Rock Parkview in Benton. The Panthers won 30-23. More photos at arkansasonline.com/109Benton/ (Special to the Democrat-Gazette/Stephen B. Thornton)

BENTON -- A big play from its defense late was all Benton needed to help Coach Brad Harris flash a huge smile after Friday night's showdown against Little Rock Parkview.

Defensive back Jadin Collinet picked off a pass from Parkview quarterback Jaylon White at the goal line with 41.4 seconds left in the fourth quarter to lead Benton to a 30-23, come-from-behind 6A-West victory in front of a boisterous crowd at Panther Stadium.

"We haven't been pushed the last four weeks, and we needed a game like this for us to make a deep run," said an ecstatic Harris, whose team has reeled off five consecutive victories since losing their season opener to top-ranked Bryant. "I think we learned a lot about our football team tonight. We struggled offensively, but defensively, we made some plays."

None was bigger than Collinet's interception that capped a stirring comeback for Benton (5-1, 3-0), which led 17-6 late in the third quarter before the Patriots scored 17 points in a four-minute span to surge ahead. The game was tied at 23-23 in the fourth until a 3-yard touchdown run from Benton quarterback Stran Smith with 3:07 remaining gave the Panthers the lead for good.

Parkview did get the ball back and quickly moved inside the Benton 5, but the rally ended when Collinet stepped in front of a White pass to seal it for Benton.

Smith finished 11 of 28 for 248 yards and 3 touchdown passes for the Panthers, who had to shake off some special teams' miscues in the second half to hold on. Donovan Pearson caught 5 passes for 130 yards and 2 touchdowns while Cam Harris hauled in 3 catches for 105 yards, including a 57-yard touchdown that gave Benton a 7-0 lead with 10:38 left in the first quarter. Also, it was Harris' 17-yard reception on fourth-and-12 that kept Benton's winning drive alive.

"Just a heck of a ballgame," Harris said. "But we knew it would be. [Parkview] is good. They're really talented. They've got a lot of players, and they play hard. We felt like we had some opportunities to kind of get up on them a little bit, but we never could.

"They just kept making plays on us. And for as well as we played on special teams in the first half, we tried to give it away in the way in the second half on special teams. But you've got to give them a lot of credit because [Parkview] Coach [Brad] Bolding had them ready to go."

Walter Hobbs rushed 12 times for 64 yards, and James Jointer added 58 yards on 15 carries for Parkview, which dropped its second game in a row on the road. White, who's been hobbled by injury, finished 9-of-20 passing for 61 yards but scored on a 1-yard run in the first half.

The Patriots, who sputtered most of the first half offensively, woke up after halftime to put the Panthers on their heels. Parkview, which picked up five sacks and harassed Smith all game, recorded a safety with 3:09 to go in the third quarter to trim its deficit to 17-8.

Moments later, Patriots' returner Monterio Elston returned the ensuing kickoff 70 yards for a touchdown. Then on Benton's next offensive snap, Parkview safety Trent Bennett recovered a Smith fumble, which later led to a touchdown catch from Parker Perry on a fake punt that gave the Patriots a 23-17 advantage with 11:39 remaining.

Benton stormed back when Smith hit Pearson for a 57-yard touchdown pass 42 seconds after Perry's score. The Panthers missed the extra-point attempt but got a reprieve when Smith ran in the end zone from 3 yards out on their next series for what turned out to be the game-winner.

"Lot of heart, a lot of integrity," Harris said of his team. "It's about being committed, it's about not quitting on a play. When you get beat, come back on the next play. In order to win a ballgame, you've got to play hard every play.

"Even though when you lose one, it's not the end of the war. It's just a battle."