Conway thunders by Cabot, takes sixth in a row in series 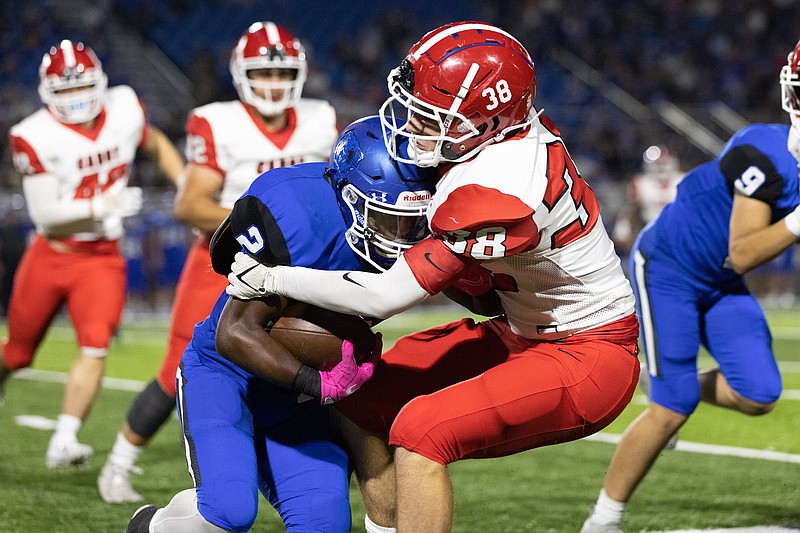 Conway running back Jaylen Chambers (left) is brought down by Cabot’s Micah Morrison during the Wampus Cats’ 57-21 victory over the Panthers on Friday at John McConnell Stadium in Conway. More photos at arkansasonline.com/109chs/. (Arkansas Democrat-Gazette/Justin Cunningham)

CONWAY -- Conway still has Cabot's number and the most important number in their latest meeting was 3.

Conway (5-1, 3-0 7A-Central) never trailed, jumping to a 14-0 lead after one quarter and a commanding 37-14 advantage at halftime against the last remaining unbeaten in the state's largest classification.

The Wampus Cats applied the Arkansas Activities Association's sportsmanship rule -- with a score differential of 35 points in the second half -- when junior tailback Elijah Smith ran 1 yard for a touchdown, and a 51-14 lead, with 3:16 remaining in the third quarter.

Omolo threw touchdown passes of 32 and 31 yards to senior wide receiver West Boudreaux in the second quarter. Elusive senior wide receiver Manny Smith, Elijah Smith's older brother, ran 4 yards for a first-quarter touchdown and turned a short pass reception into a 73-yard touchdown with 8:02 remaining in the third quarter for a 44-14 lead.

Omolo, a left-hander who wears No. 3, triggered a fast-paced Spread attack that amassed 573 total yards.

"He's special," Conway Coach Keith Fimple said. "He works at it. He enjoys football. In a day and age where people come out and play, he really, really likes football."

Junior tailback Boogie Carr ran 15 times for 79 yards and 1 touchdown (5 yards). Sophomore Cris O'Neal added an 89-yard kickoff return for a touchdown after Cabot was within 21-7 early in the second quarter. Boudreaux finished with six receptions for 108 yards. Manny Smith, who has orally committed to the University of Central Arkansas, caught six passes for 150 yards.

"Kids played well," Fimple said. "They understand the tradition and the rivalry between Cabot and Conway. I think they showed that in practice last week and the week before. They've been real focused. One thing we've been able to do is to take that and bring it to Friday night."

The Panthers (5-1, 2-1) were led by standout senior wide receiver and Harding University oral commitment Braden Jay, who had 8 receptions for 248 yards and 2 touchdowns (32 and 94 yards). Senior quarterback Grant Freeman completed 14 of 28 passes for 286 yards and 2 touchdowns. He was intercepted twice, both inside the Conway 20.

"We moved the ball at times, but not when it was important -- in the red zone," Cabot Coach Scott Reed said. "We had way too many mistakes. When you do that against a good team, especially a team that plays at that tempo and is that good in space, you're going to get embarrassed. For us to win, we have to be really good with the ball and we have to keep them from having the huge, explosive plays. Get them on the ground, make them keep earning it. We didn't do either one of those things." 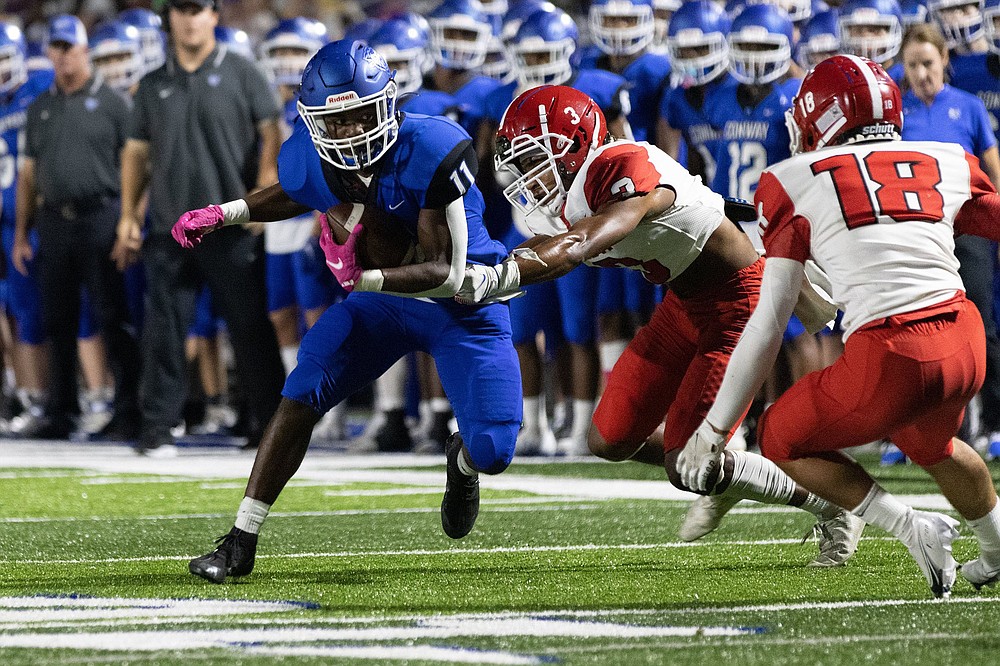 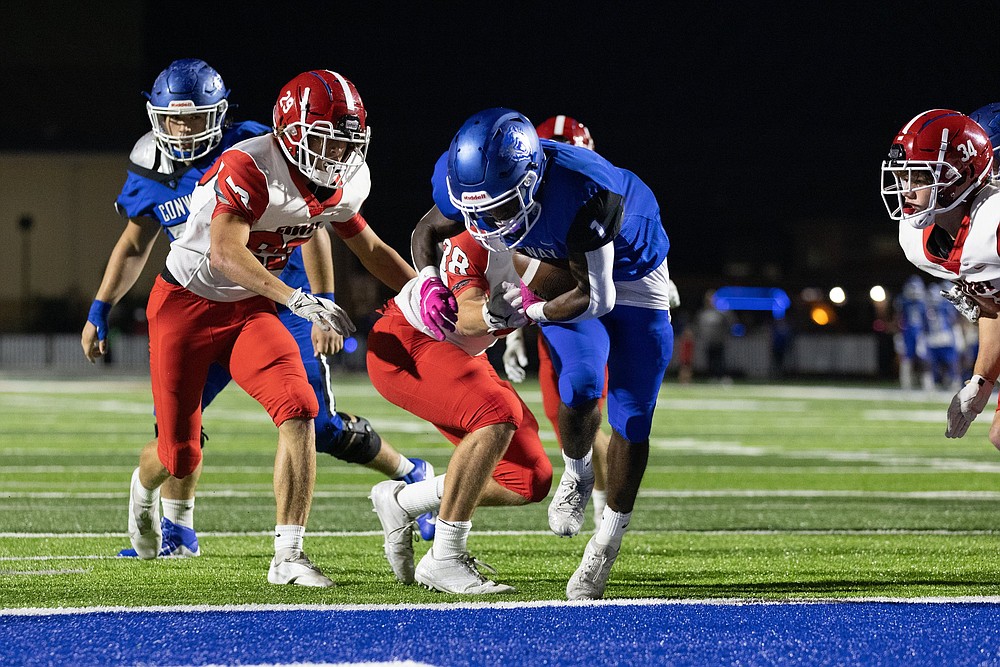 Conway’s Manny Smith crosses the goal line for a touchdown during the Wampus Cats’ victory over Cabot on Friday night in Conway. More photos available at arkansasonline.com/109chs. (Arkansas Democrat-Gazette/Justin Cunningham)

Print Headline: Conway thunders by Cabot, takes sixth in a row in series