Measure to help U.S. staffers hit by mystery illness in Cuba by JOHN WAGNER AND MIRIAM BERGER THE WASHINGTON POST | October 9, 2021 at 4:40 a.m. 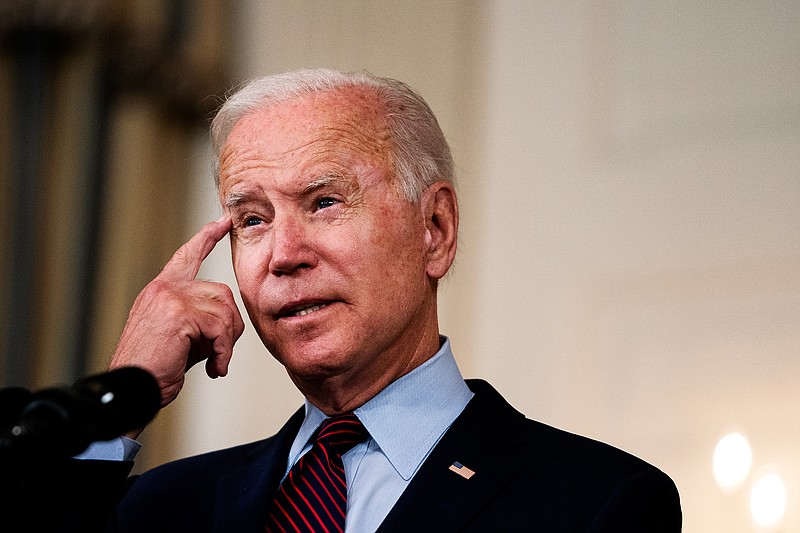 President Biden delivers remarks regarding the U.S. debt limit in the State Dining Room at the White House on Monday. MUST CREDIT: Washington Post photo by Demetrius Freeman

The bipartisan bill authorizes the CIA and State Department to provide employees with additional financial support for brain injuries and requires the agencies to create rules for making payments and study whether additional legislative action is needed.

The Helping American Victims Afflicted by Neurological Attacks Act, or Havana Act, passed unanimously in the Senate in June. After multiple delays, the House voted unanimously late last month to send the legislation to Biden's desk.

"I want to thank Congress for passing it with unanimous bipartisan support, sending the clear message that we take care of our own," Biden said in a statement. "We are bringing to bear the full resources of the U.S. Government to make available first-class medical care to those affected and to get to the bottom of these incidents, including to determine the cause and who is responsible."

Sen. Susan Collins, R-Maine, one of the authors of the legislation, has cast it as an attempt to help U.S. personnel who have had to "battle the bureaucracy to receive care for their debilitating injuries." Collins was among those who attended Friday's signing ceremony at the White House, which was closed to the press.

In a statement afterward, she said those impacted by Havana Syndrome "should have been treated the same way we treat a soldier who suffered a traumatic brain injury on the battlefield."

Biden also signed a separate bill with bipartisan support on Friday that directs the Department of Homeland Security to complete a study of cybersecurity risks to schools.

Victims of Havana Syndrome have reported a sudden onset of a range of symptoms such as headaches, nausea, memory loss and other cognitive difficulties.

During the past five years, as many as 200 incidents have been reported among U.S. personnel in countries also including Russia, China, Colombia and Uzbekistan.

In another sign of stepped-up attention by the federal government, the CIA recently removed its top officer in Vienna following criticism of his management, including what some considered an insufficient response to a growing number of purported Havana Syndrome cases at the U.S. Embassy in Austria.

The exact cause of Havana Syndrome remains unknown, and U.S. officials refer to potential cases as "anomalous health incidents," even as government investigators continue to probe its origins.

The condition is characterized by a broad range of unexplained symptoms that include migraines, fatigue, vertigo, anxiety, dizziness, memory lapses and cognitive impairment. Some of those affected have said that they felt as though they were hit by a blast wave or beam of energy.

In some cases, the symptoms were intermittent; in others, they persisted and required long-term care.

The first known cases were reported among U.S. and Canadian personnel in Cuba in late 2016. CIA officers stationed at the U.S. Embassy in Havana reported feeling intense fatigue, nausea and pulsating pressure in their heads.

Brain scans later showed tissue damage normally seen in patients with concussions after a bomb blast or car accident. As U.S. officials sought answers, the Obama administration evacuated much of the embassy staff.

At the time, the United States and Cuba had only recently restored diplomatic ties after decades of hostilities, and some observers speculated that the incidents were the result of attacks aimed at sabotaging U.S.-Cuban rapprochement. Cuban officials denied any involvement or knowledge of the illness.

Since then, suspected cases of Havana Syndrome among U.S. diplomatic and intelligence officers have cropped up in multiple countries. Earlier this year, some lawmakers in Congress urged the intelligence community to provide more information about the nature of the incidents, after reports that at least two White House officials were afflicted by similar symptoms near White House grounds in 2020.

According to The Wall Street Journal, investigators initially believed that a sonic or acoustic weapon was causing the unexplained symptoms. A separate medical assessment in 2018 theorized that the illness could be the result of exposure to microwaves, which produce energy at a radio frequency.

In December, a scientific panel organized by the National Academies of Sciences, Engineering and Medicine also found that "directed, pulsed, radio frequency (RF) energy" could be responsible. Some observers have said that Havana Syndrome could be the unintended consequence of an intelligence-gathering mission by a foreign government.