On road, Golden Lions in dire need to end slide 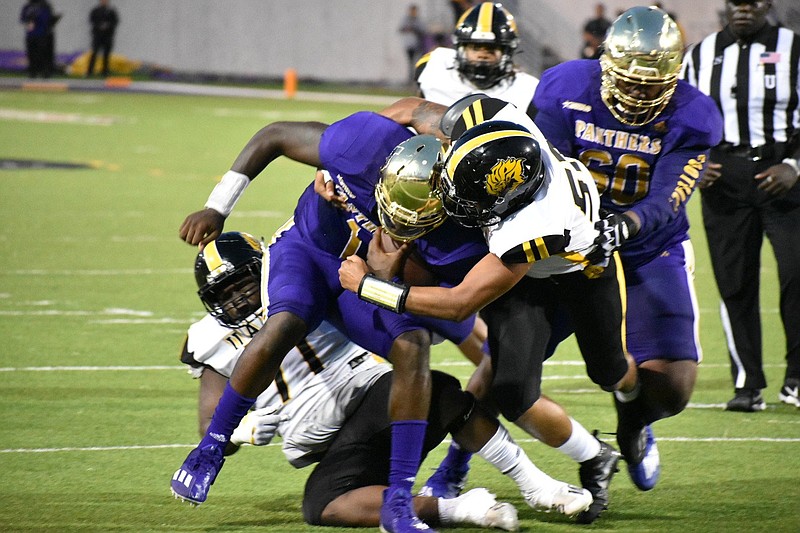 The last thing the University of Arkansas at Pine Bluff might have wanted was to be the football team going into another program's homecoming game on a losing skid, but that's the role they face today at Alabama State University.

"We're in new territory for us," Golden Lions Coach Doc Gamble said. "We're at a low point right now. We've had our chances."

That, the Lions (1-3, 0-2 Southwestern Athletic Conference) have.

Two straight Thursday night losses -- one of them coming after leading by 19 points -- have a team on an unexpected slide, five months after it played for a conference championship.

Gamble had a 4-0 coaching record before losing the SWAC title game to Alabama A&M University, but that's old news. A whole month and then some have passed since UAPB won a game, but a win today will keep the Lions from falling further out of the Western Division race.

The Lions are trying to fix what's ailed them in recent games, namely on the defensive side of the ball. A 32-13 lead in the third quarter evaporated into a 39-38 loss in Pine Bluff to Alcorn State University on Sept. 23, after the Braves totaled 511 yards of offense.

The next week, Prairie View A&M University solved UAPB's conference-leading rush defense and had 289 yards on the ground in a 27-17 win. UAPB held its only lead, 3-0, for 36 seconds in the first quarter.

Today's kickoff is set for 2 p.m. at ASU Stadium in Montgomery. There is no traditional television broadcast of the game in Arkansas, but it will be streamed on Alabama State athletics' YouTube channel (youtube.com/c/AlabamaStAthletics) and broadcast live on KPBA-FM 99.3.

The last meeting on March 27 was halted due to continuous lightning in Pine Bluff, with Alabama State leading 10-3 at the 6:12 mark of the second quarter.

The Lions are likely to stick with fourth-year starter Skyler Perry at quarterback, although he struggled in his accuracy at Prairie View and was benched in the second quarter in favor of redshirt freshman Xzavier Vaughn. Gamble said Perry had been "banged up" in previous games but did not confirm whether Perry was still injured, if at all, was hurt nine days ago.

The Hornets are 2-2 and 1-1 in the SWAC, but they're smarting from a bad loss of their own, being shutout 28-0 last Saturday at Florida A&M University.

Florida A&M held Alabama State to 197 total yards, although the Hornets ran three more plays (59-56) and earned three more first downs (17-14) than the host Rattlers. Alabama State's offensive line gave up four sacks, three of them to Ryan Nettles, who shared time with Joe Owens under center and was held to 3-of-13 passing for 17 yards.

"From our pregame, we executed and everything went well," Hill-Eley said. "Coming back out of the locker room, it was almost like I came out with a whole different set of young men."

Ezra Gray, an all-conference running back, has 108 yards on just 27 carries this season. He was held out of the Sept. 11 loss at Auburn University due to an undisclosed injury, according to a Montgomery newspaper.

Gray carried the ball only five times for 9 yards against Florida A&M.

Led by defensive back Jacquez Payton, a Jacksonville (Ala.) State University transfer who's broken up seven passes this fall, the Hornets have given up only 323.8 yards per game.

UAPB, which held opponents to fewer than 100 yards rushing per game before facing Prairie View, seeks to right its own defensive ship with a 436.3-yard per game clip.

Hill-Eley doesn't take for granted that UAPB has lost three straight overall and not beaten Alabama State since 2012. (The teams had not played from 2017-20.)

"We've got to get things together," he said. "We're going up against the Western champs. These guys have been in the championship game. They know how to play, and they've been in every game they played. We've got to get it together to even have a chance to beat this team.

Hill-Eley was asked whether the no-contest from March 27 provided the Hornets with any motivation against the Lions.

"It's one of those ones where we get another opportunity to play," he said. "Doc Gamble, who I've known for a long time, is doing a great job with the team. You're talking about that team is two plays away from being undefeated in the conference. They're doing a good job, and we're looking forward to the challenge of them coming up here and cleaning up stuff that we messed up last week and taking the field and giving these guys another lesson of how to respond to adversity."