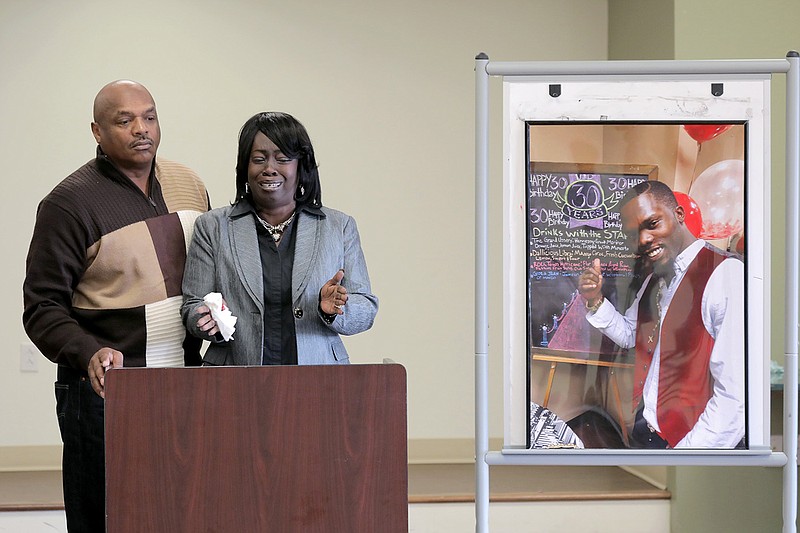 Kimberly Blackshire-Lee tearfully discusses the death of her son, Bradley Jamal Blackshire, in 2019, days after a Little Rock police officer shot him. At left is her husband, DeAngelo Lee. The city of Little Rock and the family have reached a settlement in a lawsuit. (Arkansas Democrat-Gazette file photo)

Federal court records and the attorney for Charles Starks indicate that settlements have been reached in litigation against the city of Little Rock and Starks brought by the family of Bradley Blackshire, who was fatally shot by Starks -- a former Little Rock police officer -- during a traffic stop in 2019.

Starks was cleared of wrongdoing by the Pulaski County prosecuting attorney's office but was later fired by Police Chief Keith Humphrey after an internal review of the shooting.

The complaint brought by Blackshire's estate also named Michael Simpson, a Little Rock police officer who was the first to arrive at the scene of the shooting as backup.

"The City of Little Rock and [Michael] Simpson have informally advised the Court of a settlement," Marshall's order read. "Congratulations. The Fourth Amended Final Scheduling Order, Doc. 72, is suspended. The trial is cancelled. On the Estate's motion, the complaint will be dismissed with prejudice and judgment will issue. Status report due by 12 November 2021, and every thirty days thereafter, until matters are resolved. Signed by Chief Judge D. P. Marshall Jr. on 10/7/2021."

Little Rock officials provided little information about the settlement agreement when asked about it Friday.

In an emailed statement Friday evening, city spokesman Spencer Watson wrote, "The City of Little Rock has reached an agreement in Walls v. City of Little Rock, subject to the Probate Court's authorization. The City will have no further comment until the final agreement is signed by all parties and accepted by the Court."

In response to the question of whether a settlement agreement of any significant value must receive the approval of the city board, Watson wrote, "The Office of Executive Administration through the City Manager has spending authority up to $50,000 without Board approval."

He added that the city was represented in the matter by outside counsel because of an agreement with the Arkansas Municipal League.

After reviewing records dating back to Sept. 15 in response to a request from the Arkansas Democrat-Gazette, Little Rock City Attorney Tom Carpenter said he had no communications to provide with members of the city's Board of Directors about a settlement in the litigation.

"For the time frame in question, prior to the notice of settlement [Thursday], I have not had any conversations with any member of the Board of Directors, nor anyone associated with the City, about a forthcoming settlement," Carpenter wrote in an email.

When asked for details on the tentative settlement, Carpenter wrote in an email Friday, "I do not have them, nor was this office consulted about them. I have not seen them. No one in the City has sent a copy to this office, asked our opinion, or asked for the follow through this office does in the settlement of major litigation."

When reached by phone later Friday, Carpenter said the original civil service matter was handled by the law firm Friday, Eldredge & Clark. Mayor Frank Scott Jr. had asked that the firm be allowed to continue working on it on appeal, Carpenter said.

When the federal lawsuit was filed, Carpenter said the city asked for counsel through the Arkansas Municipal League, and the group hired attorneys from the Kendall Law Firm and the firm of Harrington, Miller, Kieklak, Eichmann and Brown, with additional assistance from the Municipal League's Bill Mann and John Wilkerson.

Robert Newcomb, Starks' attorney, said Friday afternoon that he also had reached an agreement but has not yet transmitted that to Marshall's office.

"There's a settlement with Starks also, separate from that one, but there is a settlement," Newcomb told the Democrat-Gazette on Friday. Newcomb said the terms of the settlement between Starks and the Blackshire family will not be publicly released.

Early Friday morning a notice, signed by Omavi Shukur, one of the attorneys for Britney Walls, named as the special administratrix of Blackshire's estate, clarified that the settlement agreement is subject to approval of the probate court.

"Plaintiff will not dismiss the claims in this matter unless the agreement is approved by the Probate Court," the letter said, "which hopefully will happen in the coming days."

Reached by phone later Friday, Shukur confirmed what he had said in the letter.

In a news release sent out Friday afternoon, Shukur said despite a settlement, the matter is not resolved. He said Blackshire's family "believes that true justice lies outside of the current legal system and intends to continue to pursue justice for Bradley well into the future."