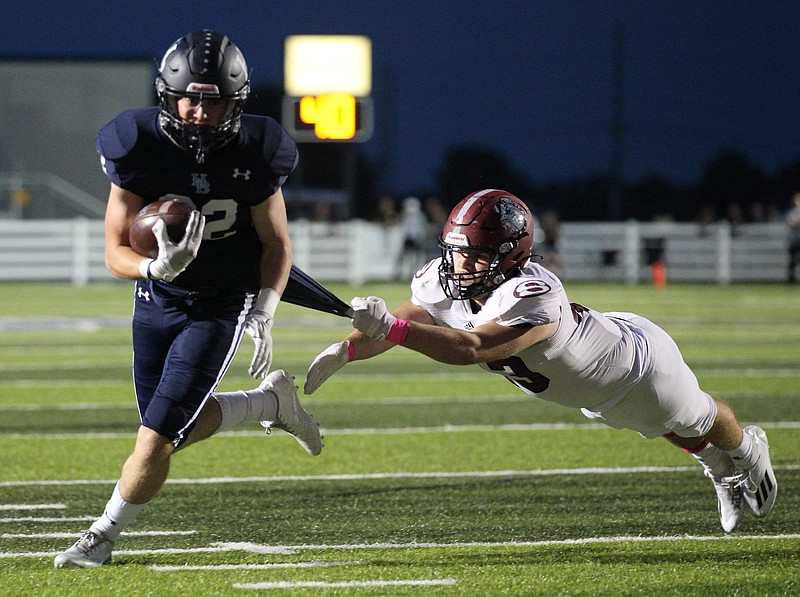 Hudson Brewer (22) of Springdale Har-ber scores touchdown with Kahlil Marks (13) of Springdale grabbing on to jersey on Friday, Oct. 8, 2021, during the first half of play at Wildcat Stadium in Springdale. Visit nwaonline.com/211009Daily/ for today's photo gallery. (Special to the NWA Democrat-Gazette/David Beach)

SPRINGDALE -- Justin Gomez has made game-winning kicks lots of times, but mostly in his own yard against imaginary opponents.

On Friday night, in front of a packed Wildcat Stadium crowd, this time Gomez lined up 22 yards away from the south goal post with three seconds left on the scoreboard clock. The Springdale Har-Ber junior executed the kick just like he's done so many times before.

This time the football nicked the right upright, but it went through nonetheless and the Wildcats celebrated a 37-36 come-from-behind win against crosstown rival Springdale.

"This just feels great," said Gomez, whose older brother Melvin was a kicker on Har-Ber's 2009 state championship team. "This was a great game, just both teams going back and forth scoring. But at the end of the day, we all came together and that kick, I was just so proud that I could get the opportunity to make that happen."

But the Har-Ber defense came up with the crucial stop it needed with 2 minutes, 21 seconds left by tackling Phipps on a third-down play to give the Wildcats the ball.

Starting at their own 20-yard line and trailing 36-34 after Phipps crushed a 73-yard punt from his own 27 into the end zone, the Wildcats drove the length of the field, conserving their two timeouts. Cole Carlton, who gave the Wildcats a huge spark in the run game in the second half, gained 20 yards on three straight carries, then Hudson Brewer ripped off a 30-yard gain on a wrap-around draw that moved the Wildcats to the Springdale 21.

Har-Ber got another big gainer from quarterback Luke Buchanan of 14 yards to the Springdale 4, setting up Gomez's game-winner as the horn sounded.

"We did a lot of things wrong tonight, but our kids did stay the course," said Har-Ber Coach Chris Wood. "They were resilient, we got the big stops in the second half with our defense and the offense made the plays at the end when we needed to. This was a heck of a high school football game."

Springdale used two big plays by its defense early in the third quarter to take a 36-21 lead. The first came with 9:39 left in the quarter when the Bulldogs stripped Buchanan of the ball and Mycahel Dickerson scooped up the fumble and raced 58 yards for a touchdown.

On the next Har-Ber offensive play, the Bulldogs were able to knock the ball loose from Brewer with Za'marion Manuel racing in to recover the fumble at the Wildcats' 30. The Bulldogs capitalized on the turnover as Phipps hit Christopher Cortez on a 30-yard first-down strike on fourth and 16, then Phipps ran it in from the 6, giving the Bulldogs a 36-21 lead with 7:38 left in the third quarter.

Springdale had a chance to salt the game away after Carlton's touchdown. The Bulldogs picked up a first down, but a false start penalty was huge and put Springdale behind the chains. Phipps ran the ball three straight times but only gained 4 yards and forced the Bulldogs to punt. His fourth-down punt from his own 27 rolled more than 30 yards into the end zone for a touchback, giving Har-Ber the ball at the 20 rather than deeper on the field.

[Video not showing up above? Click here to watch » nwaonline.com/109harber/]

"This is a heartbreaker for our kids," said first-year Springdale Coach Brett Hobbs. "They believed all week they could win. They practiced great all week and they fought hard for four quarters. I could not ask any more from them." 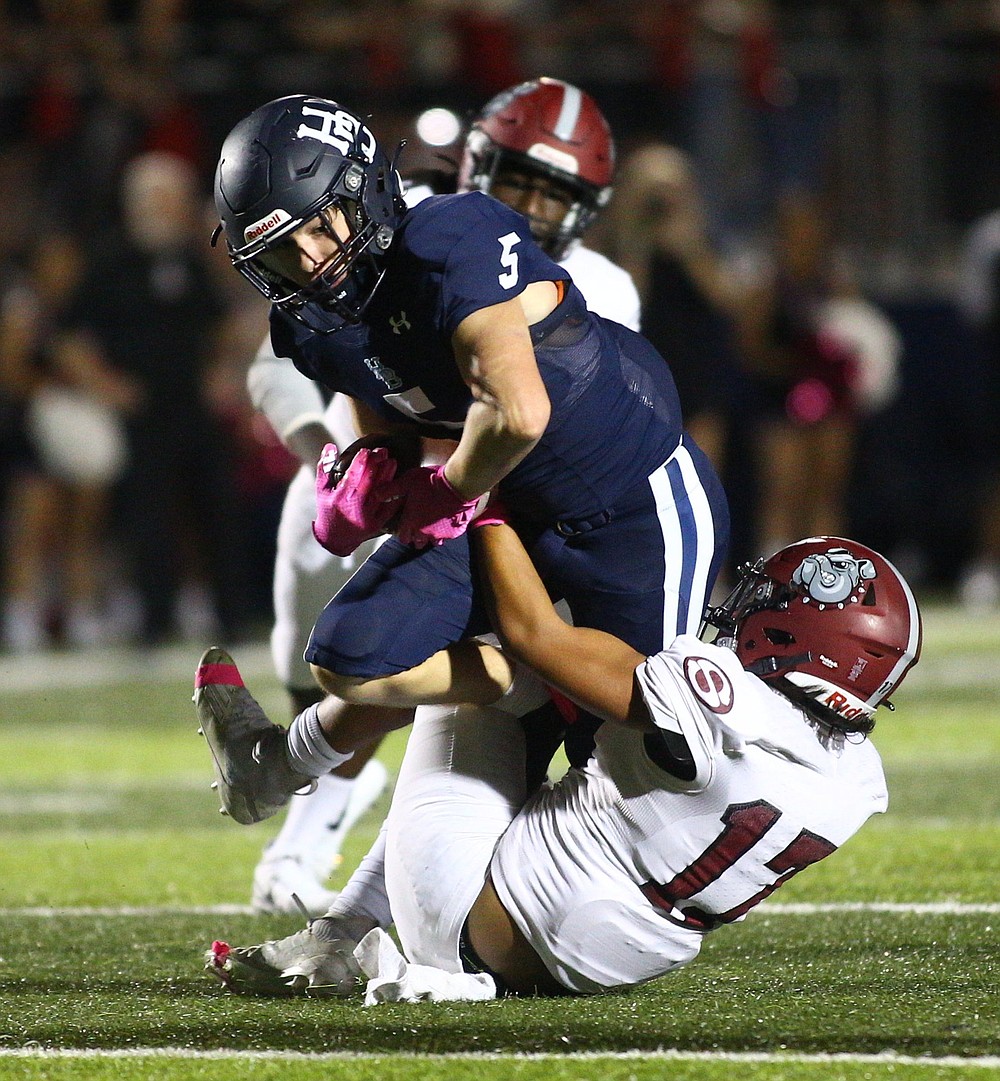 Ricardo Gonzalez (17) of Springdale brings down Ethan Fender (5) of Springdale Har-Ber during the first half. (Special to the NWA Democrat-Gazette/David Beach)