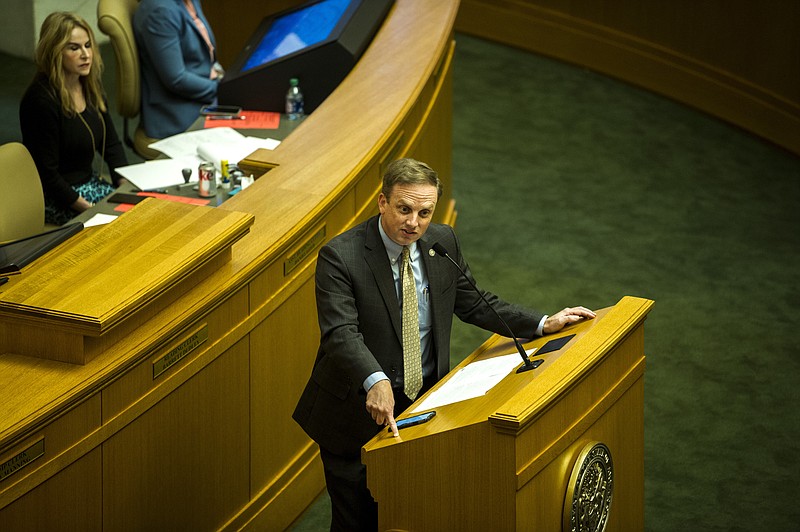 “One overreach by the state does not eliminate the overreach by the federal government, and this is an overreach,” Speaker Matthew Shepherd said Friday, speaking against the bill in a rare move for the chamber’s top legislator. More photos at arkansasonline.com/109recess/. (Arkansas Democrat-Gazette/Stephen Swofford)

On the final day of the Arkansas Legislature's regular session, representatives rejected a Senate bill that would have prohibited employers from asking about a worker's covid-19 vaccination status.

The House rejected Senate Bill 731, by Sen. Bob Ballinger, R-Ozark, with a 41-46 vote Friday morning before approving a resolution allowing the Legislature to recess and officially adjourn Oct. 15. The Senate approved a similar resolution Friday afternoon.

The session began in January and recessed in late April, with lawmakers planning to meet again in the fall to tackle congressional redistricting once the state received late-arriving 2020 population data from the U.S. Census Bureau.

Legislators reconvened Sept. 29, but redistricting was mostly overshadowed during the past week by a slate of coronavirus-related bills.

SB731 would have created a right to privacy with regard to covid-19 vaccination status in an employment setting.

It also would have granted an employee or individual who is injured by an employer in violation of the measure the remedies and procedures available under the Arkansas Civil Rights Act. The bill would have allowed the state Department of Finance and Administration to establish a grant program with distribution of covid-19 relief funds or funds received under the American Rescue Plan Act to provide restitution to individuals injured by a violation of the measure, though a finance department consultant said the rescue funds could not be used for that purpose.

Proponents of the bill said it would have offered protection to people who would be fired for declining to get vaccinated, but many thought it went too far even if they opposed federal vaccine mandates. Last month, President Joe Biden's administration announced that employers with more than 100 workers will have to mandate vaccinations or require employees to be tested weekly.

"One overreach by the state does not eliminate the overreach by the federal government, and this is an overreach," said House Speaker Matthew Shepherd, R-El Dorado, speaking against the bill in a rare move for the chamber's top legislator.

A dispute over whether lawmakers were even allowed to consider the bill preceded the chamber's debate on the legislation itself.

The resolution allowing the Legislature to come back into session after its extended recess over the summer states that lawmakers might reconvene for the purpose of considering vetoes; correcting errors and oversights; completing their work on congressional redistricting; and considering legislation related to the covid-19 public health emergency and distribution of covid-19 relief funds.

The speaker, who presides over the House, ruled SB731 was germane to that resolution, a decision he said he made on face value.

That sent the bill to the House Rules Committee, where much of the meeting room was filled by opponents of vaccine mandates as well as a man in an Uncle Sam costume.

The panel voted that the bill was not germane, but the House voted to proceed in considering it anyway. Lawmakers who supported the bill said sending it to the committee was an attempt to kill it.

Presenting the bill to the chamber, the House sponsor, Rep. Joshua Bryant, R-Rogers, said the bill needed to go through to give Arkansas a tool to push back against federal mandates.

"Arkansans have spoken. They have said, 'No, you are not going to ask our vaccination status,'" Bryant said.

Bryant was also the sponsor of House Bill 1977, which has been sent to Gov. Asa Hutchinson.

HB1977 requires employers that mandate vaccinations to provide an exemption process for workers, including requiring them to produce a negative antigen test once a week or proof of immunity to the virus that causes covid-19 or a variant, including the presence of antibodies or T cell response, or proof of a positive covid-19 test from a licensed health care provider twice a year.

Some lawmakers said SB731 would conflict with HB1977.

"This bill is entirely different and I think it goes much further and has several problems," said Rep. David Ray, R-Maumelle, adding that he voted for HB1977 even though he had some reservations. "I think this bill directly conflicts with House Bill 1977. That bill affords a testing regimen if folks don't want to take the vaccine, but inherent in that supposition is that your employer know whether you're vaccinated or not, because how are they going to know if they qualify for the testing?"

He said the bill would also imperil covid-19 liability protections that the Legislature already passed.

"If you're forbidden by law from even inquiring about an employee's vaccination status, then that's going to jeopardize all of the important work we did earlier in the session," Ray said.

He and other lawmakers said SB731 would make it illegal for people hiring someone to work in their home, such as a health aide or a housekeeper, to know if they are vaccinated.

Rep. Mary Bentley, R-Perryville, spoke for the bill and talked about a Seattle woman who recently died from a rare vaccine complication. Bentley said the woman was mandated to be immunized for work, according to her obituary.

Ballinger said he was disappointed and surprised by the House's failure to approve SB731.

He said the bill had plenty of support Thursday but believed "the big people started getting scared that they were going to lose some power, and so they got activated and were very effective."

Ballinger said he has friends who will lose their jobs because they don't want to comply with their employer's vaccine mandate.

If the bill had been enacted, it would not have taken effect until 90 days after adjournment of the regular session because it didn't get enough votes to invoke an emergency clause that would have let it take effect immediately.

Ballinger said the measure would have set up a system under which people wouldn't have been discriminated against when they applied to get their old job back or for a new job.

Hutchinson, a Republican, said, "It was a bad bill, and the House wisely killed" it.

He praised the leadership of the House and Senate for working to keep the session focused on redistricting.

"The House and Senate rejected numerous bills that were filed, and the Legislature either voted them down or determined them to be beyond the scope of the session," the governor said.

The Legislature sent the governor identical bills that would redraw the state's four congressional districts and identical bills aimed at granting exemptions to federal and employer covid-19 vaccine mandates. The coronavirus-related bills are HB1977 and Senate Bill 739 by Sen. Kim Hammer, R-Benton.

Hutchinson said he will make decisions on the bills next week.

Senate Resolution 35 by Senate President Pro Tempore Jimmy Hickey, R-Texarkana, and House Resolution 1054 by Shepherd authorize the legislative leaders to reconvene the General Assembly at any time before noon next Friday to consider vetoes; correct errors and oversights; or adjourn the regular session.

Both Shepherd and Hickey said that if the governor vetoes a bill, they would call the Legislature back to consider overriding him.

Friday was the 117th day of the regular session.

Now that the regular session is over, "the stage is set for a special session on tax relief," Hutchinson said.

The tentative start date is Oct. 25, the governor said.

Hickey said he hopes legislative leaders and the governor are close to reaching a consensus on an income-tax-cut package.

Hutchinson has said his goal is to reduce the state's top individual income tax rate from 5.9% to 5.5%.

State records show that the state Department of Finance and Administration has developed cost estimates for options that include:

• Establishing a low-income tax credit of $60 per filer.

Legislative leaders and the governor also have tossed around the possibility of phasing in a further reduction of the top individual income tax rate to 4.9%.

Introducing bills not on the governor's call for a special session takes a two-thirds vote of the 100-member House and the 35-member Senate.

Hutchinson said it is a concern that the special session could potentially lose its focus on income tax cuts to consider other issues, "but it would not be fair to Arkansas taxpayers to delay action when they are in need of financial relief today."

Asked whether he expects lawmakers to introduce bills not on the governor's call, Hickey said, "We all know that we don't like for that to happen or that any or everything could be put on.

"However, there is a process in place that if members get those two-thirds from each end with a resolution, then we will consider them," he said.

Asked if he expects legislators to be in special session for more than three days, Hickey said, "I am hopeful we are not."

Sen. Jason Rapert, R-Conway, tweeted this week that he has a bill patterned after Texas legislation that is the most restrictive abortion law in the United States. The Texas law bans abortions once cardiac activity is detected, usually around six weeks. It's now being disputed in the courts.

The Texas law leaves enforcement solely up to private citizens, who are entitled to collect $10,000 in damages if they bring successful lawsuits against not just abortion providers who violate the restrictions, but also anyone who helps a woman obtain an abortion.

Shepherd said this year is one of the first times in recent memory there has been an effort to bring up items beyond the call of a special session. He said the high vote threshold for considering bills on the call helps prevent that.

"Hopefully we can be very selective about that," he said. "I mean, my philosophy is that I'd like to stick to the call, because once you start opening up to other things, then it's almost like you have to consider everything." 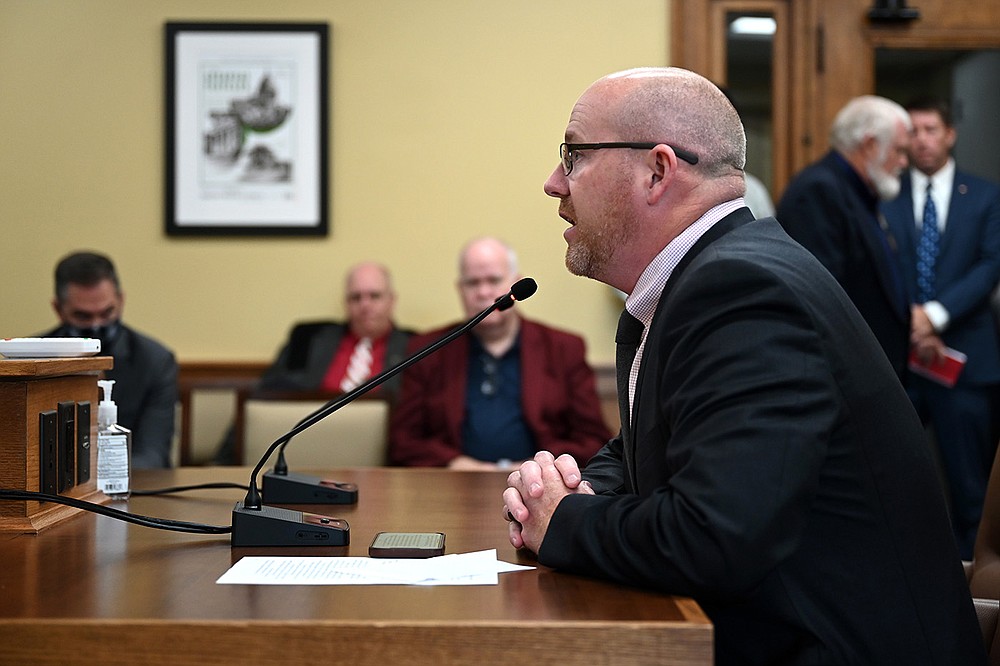 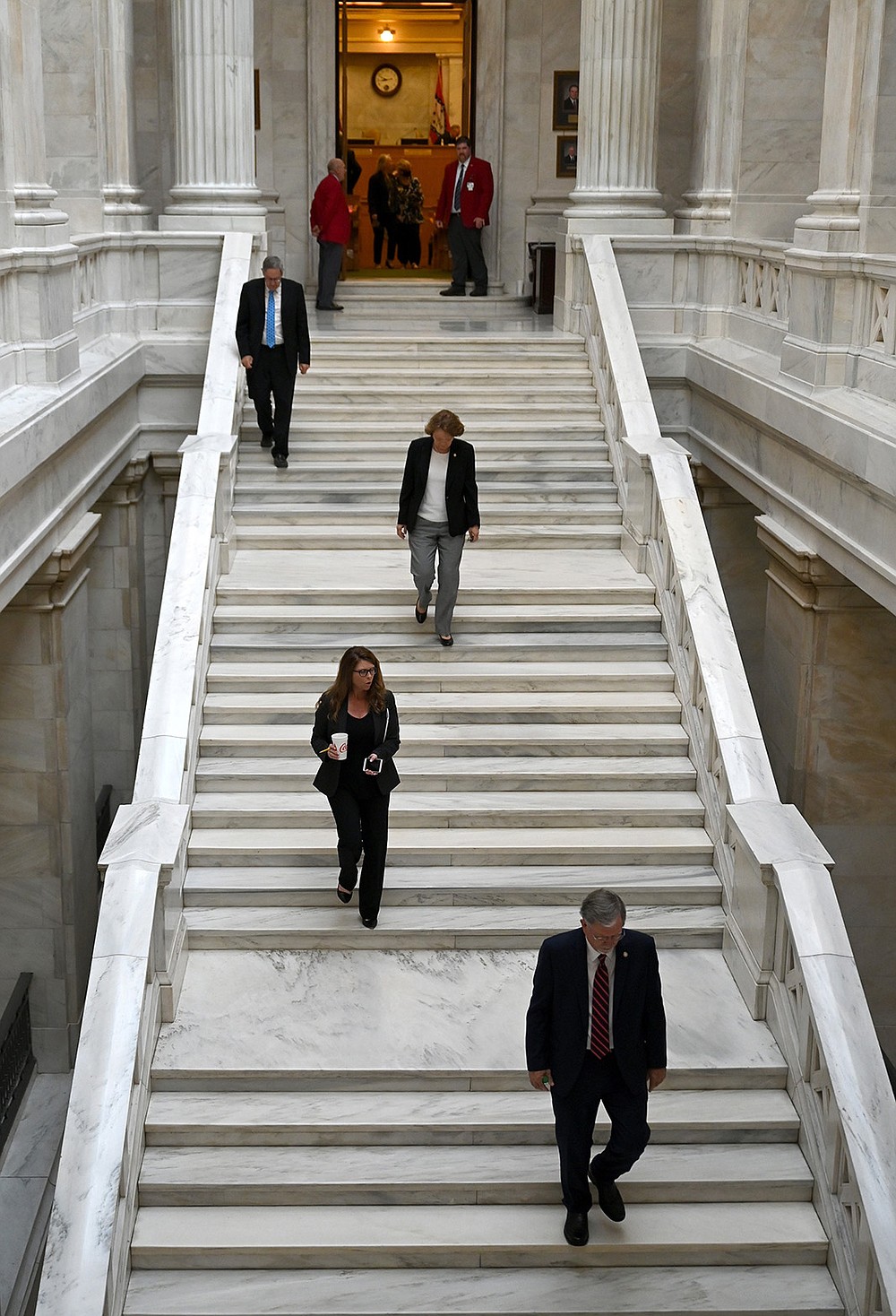 Members of the House Rules Committee head to a meeting Friday to decide if Senate Bill 731 was germane to the extended session. The House finally voted on the bill, rejecting it and ending a week of contentious debate on bills to counter employer-mandated vaccinations. (Arkansas Democrat-Gazette/Stephen Swofford)