Musk’s choice of state for hub seen as having drawbacks by NIRAJ CHOKSHI, CLIFFORD KRAUSS AND IVAN PENN THE NEW YORK TIMES | October 9, 2021 at 1:51 a.m. 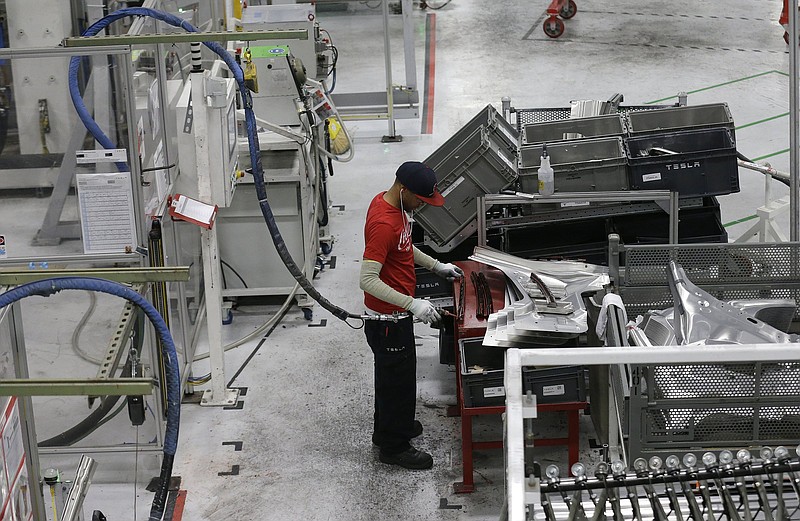 A Tesla employee works on metal parts in the Tesla factory in Fremont, Calif., in this file photo. Tesla CEO Elon Musk threatened in 2015 to pull the company’s factory and headquarters out of California. On Thursday, the company followed through, announcing plans to move its headquarters to Austin, Texas. (AP)

Tesla's move from Silicon Valley to Texas makes sense in many ways: Tesla Chief Executive Officer Elon Musk and the conservative lawmakers who run the state share a libertarian philosophy, favoring few regulations and low taxes. Texas also has room for a company with grand ambitions to grow.

But Texas may not be the natural choice that Musk makes it out to be.

Tesla's stated mission is to "accelerate the world's transition to sustainable energy." Texas, however, is run by conservatives who are skeptical of or oppose effort to address climate change. They are also fiercely protective of the state's large oil and gas industry.

And despite the state's business-friendly reputation, Tesla can't sell vehicles directly to customers there because of a law that protects car dealerships, which Tesla does not use.

In February, a rare winter storm caused the Texas electric grid to collapse, leaving millions of people without electricity and heat for days. Soon after, the state's leaders sought -- falsely, according to many energy experts -- to blame the blackout on renewable energy, a growing business for Tesla.

"It just shows that fossil fuel is necessary for the state of Texas as well as other states to make sure we will be able to heat our homes in the wintertimes and cool our homes in the summertimes," Texas Gov. Greg Abbott said.

"I was actually in Austin for that snowstorm, in a house with no electricity, no lights, no power, no heating, no internet," he said. "This went on for several days. However, if we had the solar plus Powerwall, we would have had lights and electricity."

After the Texas blackout, Abbott directed the Public Utility Commission to incentivize the state's energy market "to foster development and maintenance of adequate and reliable sources of power, like natural gas, coal and nuclear power."

Abbott also ordered regulators to charge suppliers of wind and solar energy "reliability" fees because, given the natural variability of the wind and the sun, suppliers could not guarantee that they would be able to provide power when it was needed.

Abbott's letter made no mention of battery storage.

Texas has no clean-energy mandates, although it has become one of the nation's leaders in use of solar and wind power -- driven largely by the low cost of renewable energy. The state produces more wind energy than any other.

Tesla has also struggled for years to find a way to sell its cars directly to Texans.

As in some other states, Texas has long had laws to protect car dealers by barring automakers, including Tesla, from selling directly to consumers.

Tesla has showrooms around Texas, but employees are not allowed to discuss prices with prospective buyers, and the showrooms cannot accept or process orders. Texans can buy Teslas online and pick the vehicles up at its service centers.

Once the Austin factory starts producing vehicles, including a new pickup Tesla calls Cybertruck, those vehicles will have to leave the state before they can be delivered to customers in Texas.