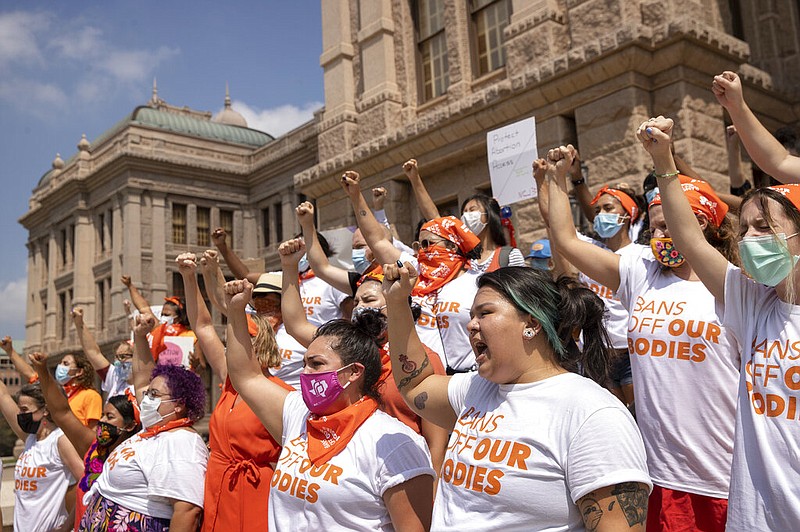 A federal appeals court late Friday reinstated the nation's most restrictive abortion law, which bars the procedure in Texas as early as six weeks into pregnancy with no exceptions for rape or incest.

The U.S. Court of Appeals for the 5th Circuit granted a request filed Friday afternoon by the Texas attorney general to temporarily suspend a judge's order blocking the law, which has halted most abortions in the state.

Attorney General Ken Paxton, a Republican, asked the appeals court to reverse the injunction by U.S. District Judge Robert Pitman, who sided with the Biden administration Wednesday night and characterized the abortion ban as an "unprecedented and aggressive scheme to deprive its citizens of a significant and well-established constitutional right."

A three-judge panel of the court gave the Justice Department until 5 p.m. Tuesday to respond to the appeal.

The Center for Reproductive Rights, which represents several Texas abortion clinics, urged the U.S. Supreme Court to "step in and stop this madness.'"

"Patients are being thrown back into a state of chaos and fear," said Nancy Northup, the organization's president.

[Video not showing up above? Click here to watch » arkansasonline.com/109txabortions/]

Texas had roughly two dozen abortion clinics before the law took effect Sept. 1, and not all Texas abortion providers resumed services during the 48 hours that the law was on hold. Many physicians had feared such a a swift reversal from the appeals court, which risks putting them back in legal jeopardy.

The new law threatens Texas abortion providers with lawsuits from private citizens, who are entitled to collect at least $10,000 in damages if successful. That novel approach to enforcement is the reason why Texas had been able to evade an earlier wave of legal challenges before this week.

The lower-court judge overstepped, Paxton said in his filing, by halting a law that is enforced by private citizens, not state government officials.

"A court 'cannot lawfully enjoin the world at large' let alone hold Texas responsible for the filings of private citizens that Texas is powerless to prevent," the filing states.

It asked the court to rule on that issue by Tuesday morning and to temporarily suspend Pitman's injunction "as soon as possible."

The brief order, issued about five hours after the appeal was filed, did not rule on the merits of the state's request. Any decision from the 5th Circuit could put the issue back before the Supreme Court, which declined to block the law when it took effect in September but said it raises serious constitutional questions.

It is unclear how many abortions Texas clinics performed in the short time since the law was put on hold. On Thursday, at least six abortions providers had resumed normal services or were gearing up to do so, according to the Center for Reproductive Rights.

The temporary lift sent abortion providers scrambling to decide whether to resume terminating pregnancies beyond the six-week mark -- a point at which many patients do not yet know they are pregnant.

At Whole Woman's Health, one of the state's largest abortion providers, the decision was left to individual doctors. Some decided to again offer the procedure after Pitman's order, but many said they would comply with the ban at least until the appeals court acts, to ensure they did not expose themselves to legal risk.

Bans on abortion after six weeks have been blocked by federal judges in several other states because they are at odds with the Supreme Court's landmark Roe v. Wade decision of 1973, which guarantees the right to abortion before viability, usually around 22 to 24 weeks.

The Texas law is different because it relies on private citizens to enforce it. The Supreme Court cited that enforcement mechanism when it declined to block the law from taking effect.

In his ruling late Wednesday, Pitman -- a nominee of former President Barack Obama -- also took issue with the law's enforcement mechanism, among other things.

Instead of directly banning abortion after the six-week limit, Pitman said, the state had contrived a "transparent statutory scheme" that allows citizens with no connection to the person seeking an abortion to interfere with a constitutional right through the state's judicial system.

Pitman's injunction on enforcing the ban extended to state court judges and courthouse clerks to block any proceedings in civil suits filed under the law.

Abortion providers, however, could still be liable for performing the procedure while the litigation is underway. If Pitman's injunction is permanently reversed, individuals who provided or assisted in abortions while it was in place can still be sued, according to the statute -- a provision that critics say also raises legal concerns.

In his filing Friday, Paxton said federal judges do not have the power to interfere with state court operations.

Pitman's injunction "grossly and irreparably interferes with Texas state-court operations," the attorney general's office said. "It also places state courts and their employees under imminent threat of contempt based on the actions of third parties that they cannot control."

Pitman's injunction lifting the ban came in response to a lawsuit the Justice Department filed against Texas after the Supreme Court allowed the law to stand. The high court was responding to a separate challenge to the ban filed by abortion providers.

The justices said last month that the providers "raised serious questions" about the constitutionality of the law. But in a 5-4 decision, the high court's majority said opponents had not shown they were suing the proper defendants.

All of the dissenting justices wrote separately, with the court's three liberal justices characterizing the Texas law as an end-run around the Constitution and court precedent.

The lawsuit filed by abortion providers is scheduled to be reviewed by the 5th Circuit in December. Providers have asked the Supreme Court a second time to intervene in the case and to rule before the appeals court considers it.

A three-judge panel of the 5th Circuit previously called off a hearing Pitman had scheduled in that case to consider blocking the law before it took effect Sept. 1.

The Supreme Court is separately scheduled in December to review Mississippi's 15-week abortion ban. State officials in that case are directly asking the justices to overrule Roe v. Wade.

Information for this article was contributed by Ann E. Marimow and Caroline Kitchener of The Washington Post; and by Paul J. Weber and Jamie Stengle of The Associated Press.