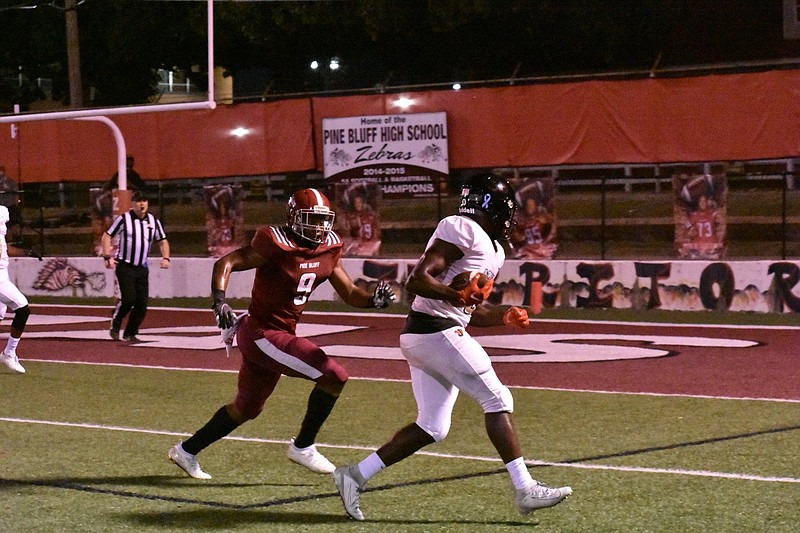 Tyrin Ruffin of Jonesboro spins away from X’Zaevion Barnett of Pine Bluff on a 27-yard completion for a first down in the first quarter Friday at Jordan Stadium. (Pine Bluff Commercial/I.C. Murrell)

Jonesboro's 6-foot-4 quarterback with a 4.3 grade-point average and 30 on the ACT collected four touchdowns and 310 yards on 19-of-25 passing Friday night, leading the Golden Hurricane to a 45-6 win over Pine Bluff High School at Jordan Stadium.

"Our game plan was working," said Acebo, who also ran six times for 12 yards and a score. "Our receivers were open. We got our run game going a little bit. Everything was working for us."

Even when the Hurricane (4-2, 3-0 in 6A-East Conference) faced second-and-40 on their second drive of the evening -- thanks to holding and block-in-the-back calls as well as one of two Charleston Collins sacks -- they found a way to score.

Tyrin Ralph hauled in a 27-yard pass from Acebo down to the Pine Bluff 3, and three plays later -- false start and all -- Acebo connected with Jesse Washington from 8 yards out to make the score 14-0.

The drive that actually started on the Zebras' 28 after the Hurricane recovered a X'Zaevion Barnett fumble on a kickoff return came full circle after a few penalties. It was that kind of homecoming night for Pine Bluff (1-4, 0-3), which has lost four straight.

"[Jonesboro] Coach [Randy] Coleman does a great job over there, hands down," Zebras Coach Rod Stinson said. "He develops his kids and gets them through the program, and we saw an example of it tonight. We missed tackles. We had a few broken assignments, but for the most part I thought we were where we were supposed to be. But at the end of the day, we've got to start making plays."

Pine Bluff punted three times, turned the ball over on downs and ran out the first-half clock on its first five possessions before Barnett made up for his fumble with a 78-yard kickoff return to end the shutout bid. Jonesboro stopped the two-point conversion attempt and scored twice in the fourth quarter, running the clock out just before 9 p.m.

Coleman said he did not see a blowout win against tradition-rich Pine Bluff coming.

"I looked on film and saw a very good Pine Bluff football team that just happened to lose to three very good teams, so we knew it was going to take a good night," Coleman said. "The first quarter was important. We got out to a good start and played well from there."

Acebo fired a 23-yard touchdown strike to Tyrin Ruffin on the Hurricane's first possession. He added to his TD count a 4-yard toss to Drake Taylor and 1-yard scoring run, all in the final 3 minutes of the first half.

For good measure, Acebo found Kavon Pointer, and the senior receiver darted past the Pine Bluff secondary for a 79-yard TD pass play. Pointer had 131 yards on three receptions.

Terrance Brown also threw a 9-yard touchdown pass to Grant Bartels on the first play of the fourth quarter to enact the running clock, and Kevion Williams carried the load on the game's final drive, scoring on a 1-yard run with 1:49 to go.

Barnett was held to 16 yards on 12 carries. Pine Bluff quarterback Will Howell completed 4 of 7 passes for 33 yards, connecting with Braylon Hopkins twice for 18 yards.

Acebo for his five total touchdowns. 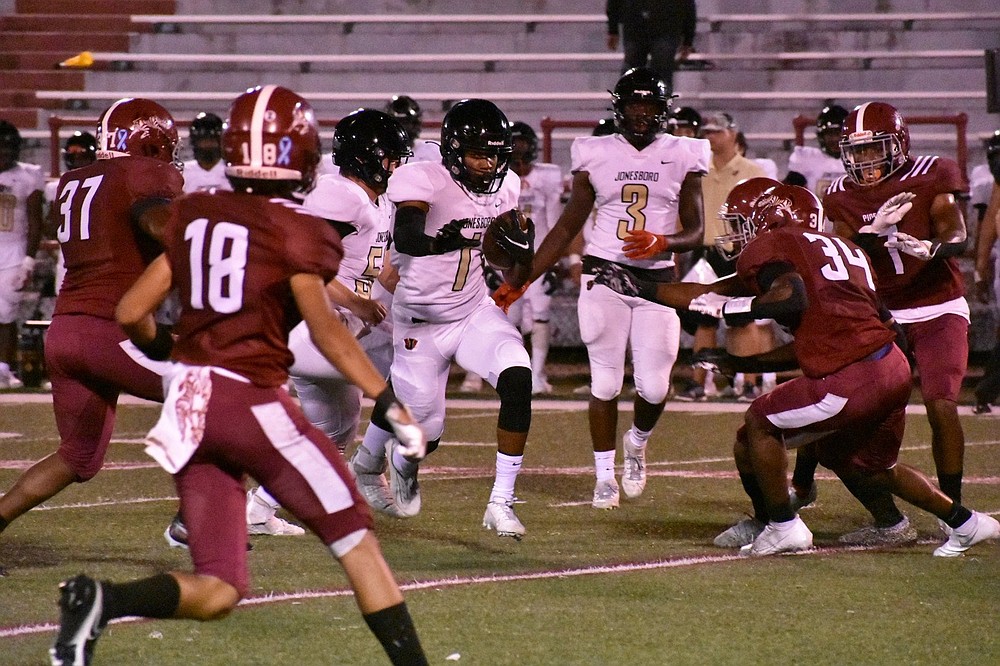 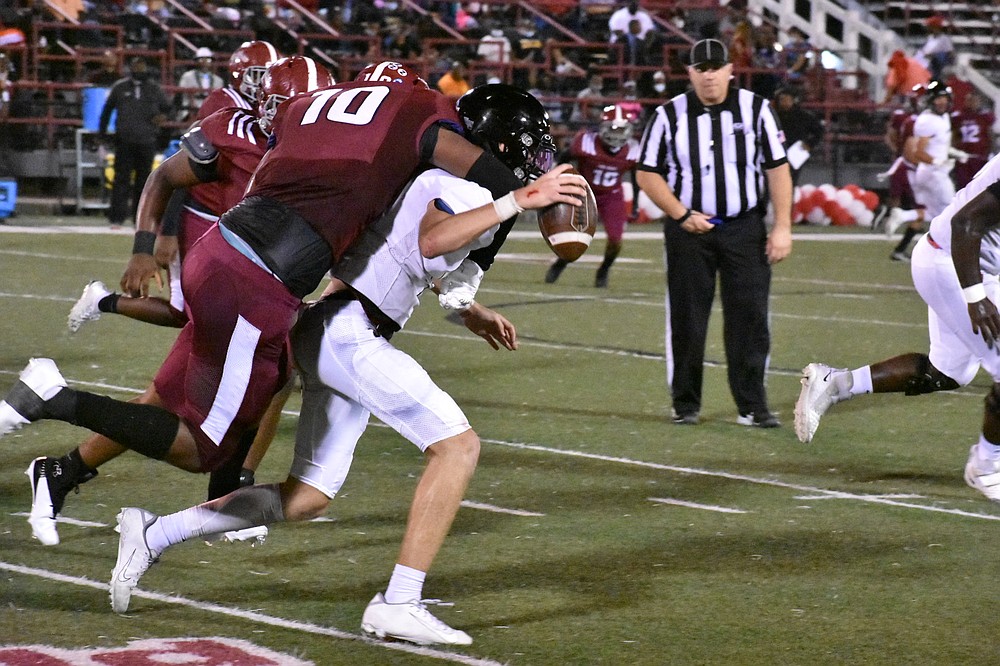