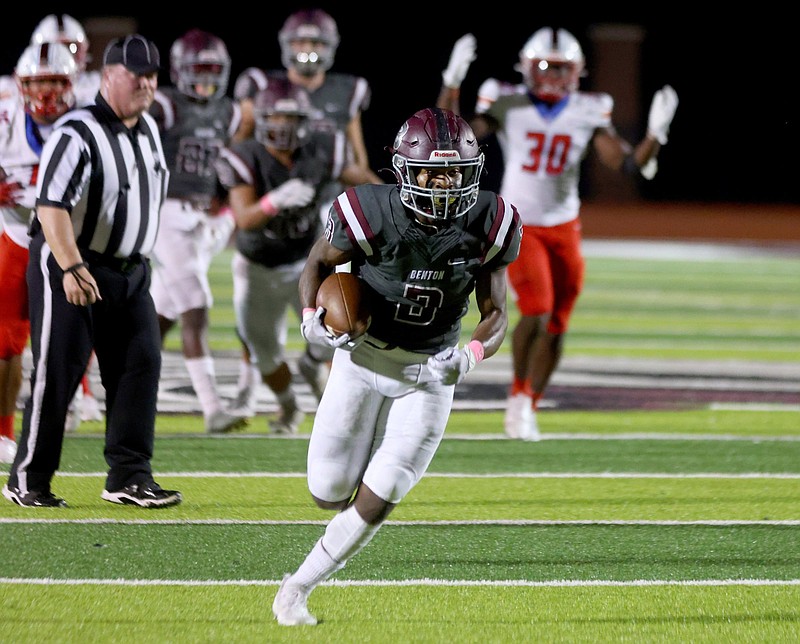 PHOTOS BY STEPHEN B. THORNTON .Benton?s Donovan Pearson (3) strolls into the end zone with Benton' 2nd TD during the first half of their football game Friday Oct. 8, 2021 in Benton..More photos at arkansasonline.com/109Benton/

The race for the 6A-West Conference title didn't get any clearer Friday night. If anything, it got even muggier.

Lake Hamilton (6-0, 3-0) and Benton (5-1, 3-0), the top two teams in Class 6A, cleared major hurdles with victories over Russellville and Little Rock Parkview, respectively, and remained on a collision course for their showdown on the final Friday of October, but even that game may not decide who wins the league title, let alone takes the top seed into the postseason.

The Bulldogs, who were beaten 48-28 by Parkview two weeks ago, welcomed back their starting quarterback, Hunter Houston, and looked every bit like the team conference coaches picked to win the 6A-West in the preseason in their 54-17 whipping of Siloam Springs. Houston wasn't perfect – he went 17 of 27 for 200 yards with 1 touchdown and 2 interceptions – but his presence under center makes Greenwood a completely different team than what it is without him.

That could make a huge difference on Oct. 22 when Benton hosts Greenwood and again on Nov. 5 in the Bulldogs' regular-season finale at home against Lake Hamilton. Until then, Benton and Lake Hamilton are in control.

However, things may not be any more transparent from where the Panthers and Wolves are sitting.

"There's four teams in our conference that can beat anybody on any given night if you don't play well," said Benton Coach Brad Harris, whose team slipped past Parkview 30-23. "You saw that [Friday]. Then you've got Greenwood and Lake Hamilton that's the same way. And then you've got a Mountain Home and a Van Buren. If they're hot, you're in trouble if you don't play well.

The Panthers overcame a huge push by the Patriots in the second half to win their fifth consecutive game. Parkview (3-3, 1-2) wiped out an 11-point deficit in the third quarter and led 23-17 early in the fourth. But Benton scored the game's final 13 points, with quarterback Stran Smith getting the go-ahead score with just over three minutes remaining.

Harris was adamant about his team adhering to a "one game at a time" motto, which seems like a must in the 6A-West. According to him, the Panthers can ill-afford to look to look past anyone, especially the team they're about to face.

"We've got a long road trip to Mountain Home," he explained. "I know they're going to be loaded for us. We don't need to have that trap game between a really good team and then a Greenwood team coming in here in two weeks."

Booneville won its 31st consecutive conference game Friday night in the same manner it's won the majority of the previous 30 league outings – in a rout.

The Bearcats (6-1, 3-0 3A-4) got touchdowns from four different players in blowing by Mayflower 49-14. During Booneville's 31-game run in conference play, 28 of those victories have come by 14 points or more. The last time the Bearcats dropped a league game was on Oct. 21, 2016, to Dardanelle when the Sand Lizards came away with four interceptions.

Trace Hall had 38- and 61-yard touchdown runs, while Rocky Ross scored from 4 and 47 yards out in Friday's 35-point win for Booneville, which will look to extend its streak Friday when it plays Baptist Prep.

Springdale was in charge of Friday's game against Springdale Har-Ber for the better part of three quarters. Unfortunately for the Bulldogs, the fourth belonged to the Wildcats, and it was enough to continue their dominance over their district rivals.

The Wildcats have now won back-to-back games after starting the season 0-4. They've also won the last three times they've faced the Bulldogs since losing a 43-42 shootout in 2018.

Nettleton quietly finished with a 3-5 record last season, but the Raiders are making plenty of noise this year.

Friday's 49-0 victory over Paragould kept Nettleton (6-0, 3-0 5A-East) unbeaten and in control in conference play. The Raiders, who are averaging 37 points, held a 27-0 lead on the Rams at the half and invoked the mercy-rule in the third quarter. The 6-0 start is also Nettleton's best mark since it won its first 11 games in 2017.

The Raiders are tied with Wynne atop the league standings. Those two will play in the final game of the regular season on Nov. 5.

Don't look now, but Maumelle has seemingly got things back on track.

After losing four games in a row by a combined 14 points, the Hornets have won their last two, including a 49-15 pasting of Jacksonville on Friday.

Weston Pierce was 8 of 14 for 207 yards and 3 touchdowns for Maumelle (3-4, 2-1 5A-Central), which handed Sylvan Hills its only loss of the year in the season opener. Jessie Knight (6 carries, 59 yards), Jordan Candler (8 carries, 59 yards) and Jason Crawford (5 carries, 23 yards) each had rushing touchdowns while Roderick Watts (3 catches, 105 yards) and Hunter Specht (2 catches, 66 yards) caught scoring passes.

The Hornets will entertain Class 5A No. 1 Pulaski Academy next week.

There are two teams in the 4A-1 Conference that are undefeated, and neither is Class 4A No. 1 Shiloh Christian.

Gentry (6-0, 3-0) and Elkins (5-0, 3-0) kept their perfect seasons going with a pair of easy victories Friday, starting with the Elks' blowout of Berryville.

Elkins running back Da'Shawn Chairs carried 13 times for 176 yards and 3 touchdowns in Elkins' 48-13 win. The junior has rushed for 965 yards and 20 touchdowns on the year, which is a big reason why the Elks are turning heads. Elkins can match the 6-0 start it had in 2020 with a victory over Green Forest next week.

For Gentry, the Pioneers, who are coming off a 14-0 shutout of Green Forest, have won at least six games for just the fourth time since 2001.