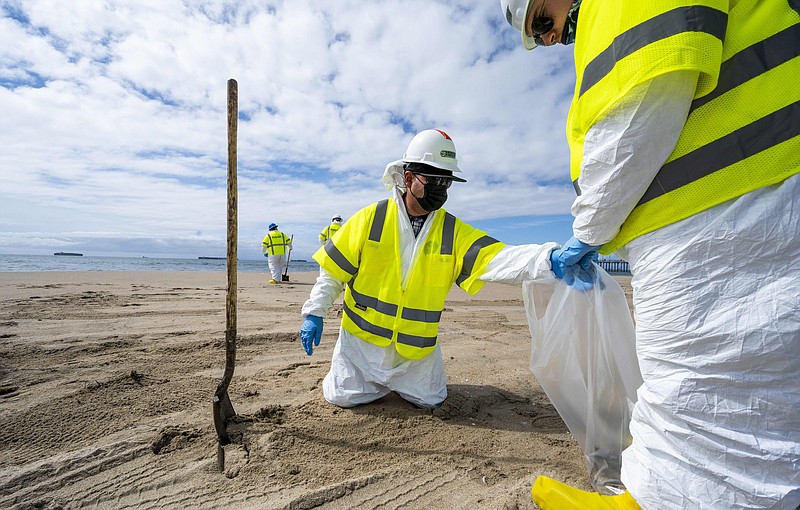 Workers with Patriot Environmental Services pick through the sand looking for pieces of oil south of the pier in Huntington Beach, Calif. on Friday, Oct. 8, 2021. Investigators searching for the cause of an undersea oil pipeline break off the Southern California coast have pointed to the possibility that a ship anchor dragged the line across the seabed and cracked it, but two videos released so far provide only tantalizing clues about what might have happened below the ocean surface. (Paul Bersebach/The Orange County Register via AP)

HUNTINGTON BEACH, Calif. -- After a crude-oil sheen was detected on the waters off the Southern California coast, environmentalists feared the worst: A huge spill that would wreck the ecosystem.

A week later, the region and its signature beaches appear to have been spared a potentially calamitous fate, though the long-term toll on plant and animal life remains unknown.

The Coast Guard estimates a minimum of about 25,000 gallons of oil spilled from a ruptured pipeline off the shores of Orange County and no more than 132,000 gallons.

"Based on what we're seeing, it's a lighter impact than expected of a worst-case discharge," California Fish and Wildlife Lt. Christian Corbo said. "We're hoping to see less impacts to the shoreline, less impacts to wildlife, based on that lowered threshold."

The news was welcome after a harrowing week of beach closures in seaside communities where life revolves around the water. Huntington Beach Mayor Kim Carr said Thursday she was "cautiously optimistic" they could be back in the water in weeks.

Many beaches remain open for volleyball, sunbathing and other activities, though people must stay away from the water.

An oily sheen was reported on the water the evening of Oct. 1, but it wasn't until the next morning that officials confirmed the spill. The Coast Guard is investigating whether a ship's anchor might have snagged, bent and ruptured a pipeline owned by Houston-based Amplify Energy Corp. that shuttles crude from its three offshore platforms to a facility on the shore.

Out by the oil platforms, there was no visible sheen by midweek and the putrid odor that blanketed Huntington Beach last weekend had faded. Dolphins jumped in the waves, and birds skimmed the water's surface.

But environmental advocates said the situation remains serious, and they fear the long-term effect on wetlands and ocean life. Crude oil components can linger beneath the surface of the ocean and affect tiny organisms that are ingested by fish, which are later eaten by birds, marine mammals and people.

In an offshore spill, birds are often among the first hit as crude can stick to their feathers, leaving them chilled by cold water temperatures. Ten oiled birds were found dead over five days and 25 were recovered and taken to a wildlife center for treatment.

John Villa, executive director of the Huntington Beach Wetlands Conservancy, said more than 1,000 animals were affected. In this spill, oil has entered three marshes near the beach, but the damage was minimized by quickly erected barriers, he said.

"It's not as bad as we feared," he said, adding that the latest challenge is to pump oxygen back into the marshes because no new water is coming in. "We expected a lot more of a problem in our marshes."

Mike Lynes, director of public policy for Audubon California, said migratory birds aren't typically seen in the region in large numbers until November, and that may have helped limit the harm.

But many birds are likely affected by oil and haven't been found, and other species that don't have the same migratory patterns might not be as fortunate, he said. That's why tallying oiled birds isn't an ideal measure for the effect of an oil spill, he said.

"The oil still persists in the coastal environment and causes all sorts of problems for a long time," Lynes said.

As the crude has drifted south, tar balls have appeared on beaches about 50 miles from the original site, an ominous sign that the impact on the environment is widening.

Some of the greatest concerns are the impact beneath the ocean's surface. Crude oil can smother deep-water corals and kill a critical food source for blue whales, according to Oceana, an ocean conservation organization.

Environmental experts said fish can ingest oil, and the toxins can travel up the food chain. Because of the spill, fishing has been barred for miles off the shore of Orange County.