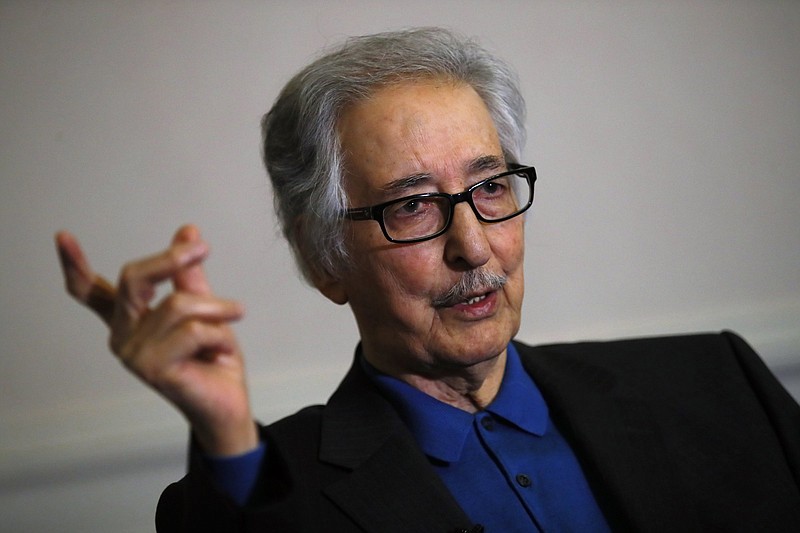 FILE ? In this photo taken on Jan. 29 2019, former Iranian President, Abolhassan Banisadr, speaks during an interview with the Associated Press in Versailles, west of Paris, France. Banisadr, Iran's first president after the country's 1979 Islamic Revolution who fled Tehran after being impeached for challenging the growing power of clerics as the nation became a theocracy, died Saturday, Oct. 9, 2021. He was 88. (AP Photo/Francois Mori, File)

Abolhassan Banisadr, who as the first president of the Islamic Republic of Iran tried and failed to resist the currents of religious radicalism, died Saturday at the Pitie-Salpetriere Hospital in Paris. He was 88.

His death came after a long illness, his family said on Banisadr's official website.

[Video not showing up above? Click here to watch » arkansasonline.com/1010banisadr/]

The revolution's supreme leader, Ayatollah Ruhollah Khomeini, used these two episodes to purge secularists, nationalists and other moderates from Iran's government. Banisadr was the most prominent victim.

Soon after U.S. diplomats were taken hostage at the U.S. Embassy, Banisadr visited the occupiers and urged them to withdraw.

"You think you have taken America hostage," he told them. "What a delusion! In fact, you have made Iran the hostage of the Americans."

Several months later, Iran's ambassador to the United Nations, Mansour Farhang, resigned in protest of his government's failure to end the crisis and wrote a long article condemning the takeover. A newspaper connected to Banisadr was the only one in Iran to publish it.

Farhang, who became a professor of political science at Bennington College in Vermont, remembered Banisadr as "a genuinely liberal Muslim."

"In the position of nominal power for a year and a half, he was more of a preacher and teacher than a manager of power," Farhang said in a 2013 interview for this obituary. "Intellectually and temperamentally, he could not function as a politician in an autocratic state."

Banisadr was born March 22, 1933, into a family of pious landowners in Hamadan, Iran, said to be one of the world's oldest towns.

After studying law, theology and sociology at Tehran University, he moved to Paris, where he spent several years in the 1960s studying at the Sorbonne. He was caught up in the student movement and led protests against the regime of Shah Mohammad Reza Pahlavi.

Information on Banisadr's survivors was not immediately available.

In the 1970s, Banisadr met Khomeini, a friend of his late father, who had also been a cleric. They were reunited in Paris after Khomeini was exiled there in 1978.

In one of the 20th century's most spectacular political collapses, the shah fled Iran on Jan. 16, 1979. Khomeini, who had directed the revolution from exile, returned home two weeks later. In the broad-based government that the ayatollah installed, Banisadr was deputy minister of finance, then minister of finance and finally minister of foreign affairs.

With the ayatollah's blessing, Banisadr easily won the presidential election of Jan. 25, 1980. The ayatollah, however, had secured approval of a constitution giving him power to dismiss presidents at will.

Over the next 18 months, he directed Banisadr's rise and fall.

In his first weeks in power, Banisadr worked to bring order to the shambles that had been left by the collapse of the shah's government. However, he was quickly was distracted by the hostage crisis.

"The takeover of the U.S. Embassy was wholly in line with Khomeini's strategy of focusing hostility abroad," he later wrote. "It was at this moment that the idea of a religious state became viable. He also realized that he could now silence people at will, by threatening them with the accusation of being pro-American."

In the venomous political climate of post-revolution Tehran, enemies rose against Banisadr. After war with Iraq broke out, militants criticized him for relying more on the regular army, which they associated with the shah's monarchy, than on the Revolutionary Guard and other political forces.

The combination of the hostage crisis and the war created a hyper-radical atmosphere in which a tweedy, mustachioed intellectual such as Banisadr could hardly hope to survive. On June 10, 1981, Khomeini removed him from his post as commander in chief.

On June 21, Parliament ruled him "politically incompetent" and voted to impeach him as president. Six weeks later, he slipped out of the country aboard an air force jet piloted by a sympathetic officer.

For much of his later life, Banisadr lived with his wife and three children in or near Paris, including at a heavily guarded home in Versailles.