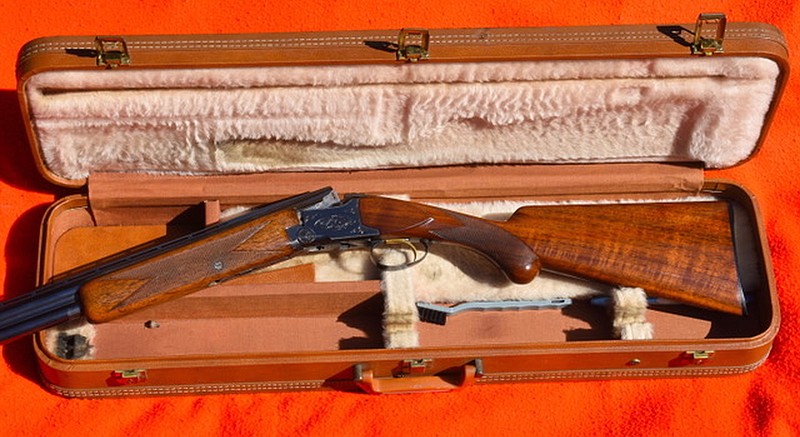 South Dakota was the right place to exercise a couple of classic Browning shotguns.

One is old, and one is new. Both were joyous to carry and shoot.

When you travel afar for a marquee hunt, it is wise to pack at least two shotguns in case one breaks or malfunctions. Other hunters in your party might let you use one of their guns if your lone gun lets you down, but that is a party foul. Hunters expect their companions to be self reliant.

In his 1996 book, "Browning Superposed," Ned Schwing explained how Browning employed a curious salt-curing process to prepare American walnut for the burgeoning demand for Browning firearms. Morton Salt had developed the proprietary salt-curing process for furniture wood that was much faster than curing wood in kilns.

In 1965, Browning applied the salt solution to a vast number of stock blanks stacked eight feet high in five-foot by five-foot squares. The squares covered an area the size of a football field.

The salt leached moisture from the stocks as intended, but the extracted moisture created a brine solution that soaked the blanks beneath the top layer. It affected about 90% of all Browning stocks from 1967-69, including some used for high-grade Auto-5 semiautomatic shotguns and and for some rifles.

Everybody knows that salt and metal don't play well together. Salt wood stocks rusted actions and barrels. Even though Browning restocked, refinished and repaired salt-damaged guns, shooters and collectors avoid Superposed from that era.

After 50 years, salt wood issues, if they exist, will have long been evident. A gun from that era with clean metal almost certainly does not have a salt stock. If Browning restocked and refinished a Superposed, it will have been documented. Having the original documentation is valuable. If it does not exist, Browning will supply a letter on request for the serial number you provide.

Nevertheless, most people want nothing to do with a salt-era Browning. When you find one, you can often get an outstanding deal on it, as I did with my Superposed. A 20-gauge Superposed is considerably more valuable than a 12-gauge. Mine even came with its original, factory, fleece-lined fitted case.

John Browning introduced the Superposed, the first over/under double barrel, in 1931. All Superposed were hand tooled, hand-inletted, and hand fitted, essentially a mass produced custom double. The high expense of manufacture eventually proved unprofitable, prompting Browning to discontinue mass distribution in 1986. However, the Superposed is still available as a special order item.

Without question, the 20-gauge Superposed was designed expressly for upland bird hunting. It is very light, and with its long barrels, it swings fluidly. It feels alive. It seems have been designed especially for somebody with my build. It snaps to my shoulder and instantly aligns my eyes to the zone in front of the muzzles.

The same is true for the Browning Auto-5 and the Remington Model 1100. All three are highly refined game getters. I'm not sure I would say the same about a lot of contemporary guns which are marketed more for superficial features.

Before the first day's hunt in South Dakota, I got comfortable with the Superposed by shooting a box of Federal, 2 3/4-inch, No. 5 pheasant loads at clay targets. I customarily struggled to hit targets flying left to right, but I rectified that with a slight footwork adjustment.

I missed my first two shots at live pheasants, but their speed enabled me to dial in the proper amount of lead. I did not miss again.

The purest word to describe shooting a 20-gauge Superposed is blissful. The Superposed is at home in a pheasant field, doing what it was conceived and built to do.

My Superposed is almost as old as I am. As I carried it through tall grass and milo, I wondered where all it had been, and with whom. I imagined its adventures in the 1960s and 1970s when America's bird fields were more prosperous. It's a functional time capsule of American bird hunting history, and I am proud to keep it alive.

In 1973, Browning introduced the Citori as an affordable alternative to the Superposed. It is one of the most popular, most successful over/unders of all time. Unlike the Superposed, the Citori is available in 16- and 28-gauge, and in .410-caliber.

Miroku, a Japanese manufacturer, makes the Citori as opposed to the Superposed, which is made in Belgium by Fabrique Nationale. The Citori is mass produced with simpler processes, but Browning did its best to emulate the Superposed's best characteristics. It largely succeeded. Almost everyone that has ever owned a Citori loves it.

The Gran Lightning is a couple of steps above the standard Lightning, with fancier wood and deeper, more defined engraving. I bought mine from a friend during the 2019 hunt with Wild Wings in South Dakota. He had also brought a Marlin Model 90 over/under 16-gauge. For fit and finish, the Marlin is not in the same league as the Citori, but my friend likes it better, and he shoots it better than the Browning. He made me an offer on the Gran Lightning that I would have been stupid to refuse, and neither of us regrets it.

One glaring difference between the Gran Lightning and the Superposed is weight. The Gran is noticeably heavier, and the weight is compact, giving the gun a dead feel. It doesn't swing nearly as well as the Superposed, but it is an outstanding snap shooter, as evidenced by a head shot I made on a rooster that practically knocked off my cap. My other kills were also snap shots on roosters flying straight away or crossing close.

Put another way, the Superposed is a dove and pheasant gun. The Gran Lightning is a quail/grouse/woodcock gun, although it takes a braver man than I to take a gun that pretty into a grouse or woodcock covert.

There are dozens of over/under shotguns on the market, and while I would love to have a Cesar Guerini, I am proud to carry either of my Brownings in any setting.