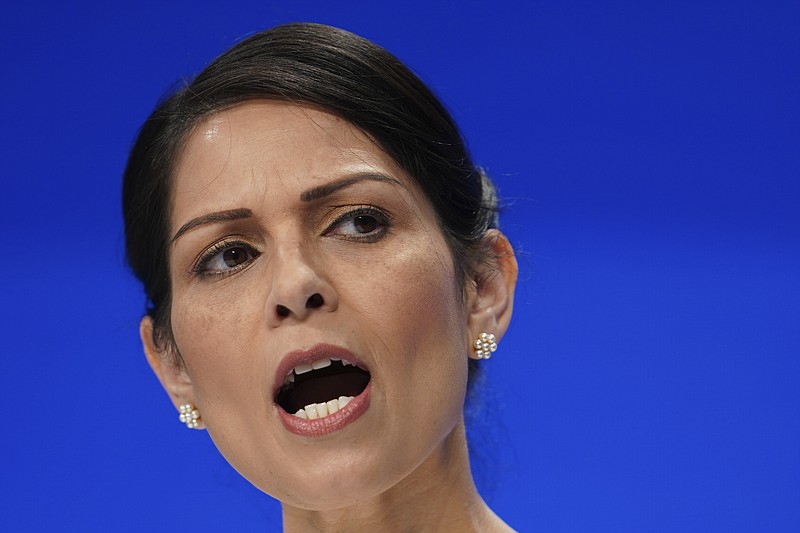 FILE - In this Tuesday, Oct. 5, 2021 file photo, Britain's Home Secretary Priti Patel speaks at the Conservative Party Conference in Manchester, England. The chief executive of Britain&#x2019;s biggest phone company, BT, proposed the &#x201c;walk me home&#x201d; service in a letter to Home Secretary Priti Patel, saying it would complement the existing nationwide emergency number. Once a woman activated an app on her phone, the service would track her journey and send an alert to her emergency contacts if she didn&#x2019;t reach her destination on time, Philip Jansen said in the letter. (AP Photo/Jon Super, File)

LONDON -- A top British government official is backing a phone company's proposal for a new tracking service to help protect women walking alone, an idea pitched amid anger over the slayings of two young women who were targeted near their homes in London.

The chief executive of Britain's biggest phone company, BT, proposed the "walk-me-home" service in a letter to Home Secretary Priti Patel. Once a woman activated an app on her phone, the service would track her journey and send an alert to her emergency contacts if she didn't reach her destination on time, Philip Jansen said in the letter.

The "walk me home" service could be up and running by Christmas, the Mail reported.

In March, Sarah Everard, a 33-year-old marketing executive, was abducted, raped and killed by a serving police officer who was convicted of murder and other charges this month and sentenced to life in prison without the possibility of parole.

Primary school teacher Sabina Nessa, 28, was killed six months later as she walked through a park in south London on her way to meet a friend.

The pope addressed parliamentarians who were in Rome for a preparatory meeting before the U.N's annual climate conference, which begins Oct. 31 in Glasgow, Scotland.

Francis referred to a joint appeal he and other religious leaders signed this week that calls for governments to commit to ambitious goals at the conference.

"This demanding change of direction will require great wisdom, foresight and concern for the common good," Francis told the visiting lawmakers from many countries.

Francis said earlier he intended to participate in the U.N.'s conference, but the Vatican announced Friday that he would not attend and the Vatican delegation would be led by the secretary of state, Cardinal Pietro Parolin.