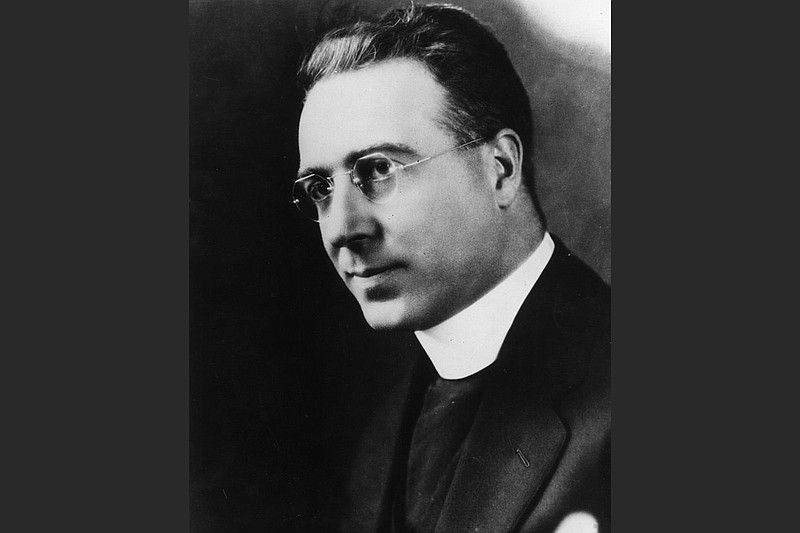 Clergyman broadcaster, Father Charles Coughlin, “Shepherd of the Air,” supporter of the pro-fascist Christian Front and founder of the “National Union for Social Justice” was photographed on April 15, 1933. (Keystone/Getty Images/TNS)

DETROIT — "You know how some neighborhoods have a house all the kids believe is haunted? A really creepy place you'd rather cross the street than walk right by?" says Andrew Lapin at the beginning of his new "Radioactive" podcast.

Growing up near the Shrine of the Little Flower in Royal Oak, Mich., Lapin felt chills running down his spine every time he passed the Art Deco basilica at the corner of Woodward and 12 Mile.

"So why were we so afraid of it?" he asks. That fear traces back to the Rev. Charles Coughlin, the subject of the eight-episode "Radioactive." The podcast dropped its first installment last week and is available through Tablet magazine's site and Apple Podcasts, Spotify, Stitcher, and other major platforms for podcasts.

A notorious antisemite and popular radio star in the 1930s, Coughlin used his celebrity to spread ugly prejudices and fascist leanings to a nation rocked by the Great Depression. His behavior echoes strongly in 2021 America, where certain politicians and media figures are willing to foment hate and division in order to increase their own power and fame.

"Figures like Coughlin were ... to use a modern word, canceled before they had a chance to really infect American democracy," says Lapin, who's an editor at the Jewish Telegraphic Agency, film critic and former editor-in-chief of the Detroit Jewish News.

"But what I think is pretty apparent looking at his story through today's lens is that, actually, his ideas and his tactics burrowed under the fabric of American society, just out of view. And we are now seeing them in a much clearer light than we ever have before."

Lapin, who started working on the podcast in 2017, spoke recently about it. The interview was edited for space and clarity.

The first episode starts with the image of a haunted house. How many people do you think share that feeling right now about Father Coughlin or even know about him?

My sense is that a lot of people don't know or have forgotten the full history of Father Coughlin. And a lot of folks don't know the name or don't really know what he represents. They might have a vague idea that Shrine was founded by someone who had reprehensible views, but they don't know the full story behind it.

I've always believed that Jewish Detroiters, particularly of my parents' generation, knew the full story and that there was almost kind of a whisper network of discussion about Coughlin, about the Shrine and that's where the haunted house imagery came from.

You started working on this around 2017. Was there anything in particular that spurred you, anything happening in the media that echoed Father Coughlin or any specific examples of hate speech or hate events?

I wasn't hearing Father Coughlin's name a lot, but I was seeing echoes of it everywhere, starting at about 2017. That was the period right after (President Donald) Trump's election, where you started seeing the word demagogue a lot more in the media. Of course, also we were all witnessing extremist voices being amplified in the media and particularly in social media, which brought to mind the way Coughlin had taken advantage of radio in its earliest days.

Then, over the course of my fascination with Coughlin and trying to learn more about his story, several big events were happening in America that would keep reminding me of him: the Charlottesville march of 2017, particularly the Tree of Life shooting in 2018 (at a Pittsburgh synagogue where 11 people were killed), and then, just earlier this year, the Jan. 6 events, insurrection, whatever you want to call it (when the U.S. Capitol was attacked). So those things together kept reinvigorating my interest and determination that this was a story that really mattered right now.

The parallels between Coughlin's use of radio and today's social media and certain cable news and radio personalities is astounding. Although what's happening now seems completely new to us, it's completely old, such expressions of hate.

I think the important thing to know about Father Coughlin is that he was not corporate-backed. He really was kind of a fully independent media figure who appealed directly to his listeners. And that made him more of a threat, because he was this grassroots, populist figure who people could believe was not being paid off by anyone.

You see that today ... no one really wants to be compared to someone who supported the Nazis, but at the same time a lot of these techniques that Father Coughlin was using — sort of casting his followers as the quote-unquote real Americans, and saying that outside forces, shadowy elites were trying to undo Americanism and Christianity — this is all very much still the tactics of demagogic media figures today.

Was there anything you found surprising once you did this deep dive?

I was surprised by a lot of things. I had access to correspondence between Father Coughlin and his superiors that had been sealed at the Archdiocese of Detroit for many, many years and had only recently been unsealed. Those documents paint this portrait of Coughlin being very wily and very careful in how he evaded the scrutiny of his superiors in the Catholic Church and was able to continue putting out this fascist, hateful language at the same time he was trying to disavow any responsibility for it.

Also in these files are the actual letters that Coughlin would write to Mussolini, inviting him to write a column in his newspaper, so his ideas could be better understood in America — because Coughlin thought the media was giving Mussolini a bad rap. All of that was really kind of frightening. And then learning more about the Christian Front, the militia that followed Coughlin's orders, was very, very chilling, especially in light of this dialogue around what happened this past January. The degree to which they were willing to follow everything he said and interpret his coded messages was terrifying.

Father Coughlin's power collapsed eventually (according to a recent Free Press story, "his radio outlets abandoned him in 1940 ... and church leaders convinced Coughlin to close his newspaper in 1942 to avoid federal prosecution for sedition"). After doing the series, where do you find hope? Or do you find hope?

A lot of people like to say that Father Coughlin, he never got that close to the White House. His fringe movement mostly remained on the fringes — the violent fringes, but still the fringes. The U.S. eventually did join the war effort, so that made views like his incredibly unpopular and that's where he lost a lot of his support. I suppose I see some hope in that, but I would caution against reading too much into it. We know we just can't assume everything will wind up on the right side of history.

In doing a podcast about Father Coughlin, who used radio to come to power, did the audio format feel appropriate to you?

That is a huge part of what I wanted to do. It was very important to me that this be a podcast. I had several people say, 'You should just make this into a book,' because I wasn't having much luck getting producers to accept it as a podcast. I said it has to be in his original medium, because that is what provides the crucial commentary and perspective on what he is doing.

We can play his original speeches and you can hear him the same way his radio audience would have heard him 80 years ago. And you also hear the music that he played, the very churchy organ music that put you in a religious mindset to accept what he was saying as the word of God. I'm hoping to use the medium to really poke at this kind of celebrity and ask these questions. Are we willing to listen to anyone we hear through our headphones?