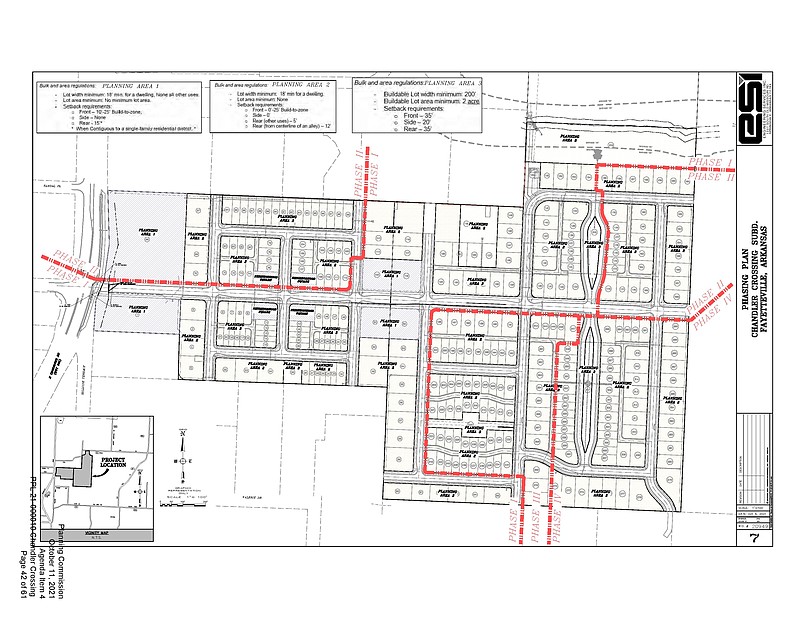 FAYETTEVILLE -- The Planning Commission approved a preliminary plan for a 313-lot development in an area on the northeast part of town that residents say experiences significant flooding and has had water quality issues.

The commission voted 9-0 Monday to approve the plan for Chandler Crossing subdivision east of Zion and Crossover roads. The development will include lots for single-family homes, duplexes, triplexes, cottage homes, townhomes, and commercial and office buildings. The commercial area will face Crossover Road.

The lots will lie south of Hilton Creek, which flows through the site and into Lake Fayetteville. The 82-acre site once served as a family farm. The plan includes about 36 acres of green space within the site.

The City Council approved annexing about 59 acres of the site into the city and a detailed zoning plan for the project in March. Several residents, including many from the Copper Creek subdivision to the north, expressed concerns over the project's impact on flooding, water quality, the environment and traffic.

The project's developers submitted a drainage study to the city and worked with the city's urban foresters on a tree preservation plan, said Ryan Umberger, senior planner with the city. Blake Murray with Engineering Services Inc. presented the item to the commission and requested variances to city code dealing with street width and block length. Murray also asked to donate 9 acres near the creek to the city for use as a park.

Murray said the development adds up to about 4 units an acre when accounting for the entire site. The developers plan to ease the slope along the creek, install native vegetation and provide drainage spots throughout the site, he said.

Ted Jack, park planning superintendent, advised the commission against accepting the park land, saying the benefits largely would serve water quality purposes and not recreational purposes. David Lashley Park already sits immediately north of the site, he said. The city's Environmental Action Committee, however, supported accepting the land, saying it would provide the city an opportunity to improve the water quality at Lake Fayetteville.

The commission ultimately accepted the land to use as a park and granted the requested variances to code for streets and blocks.

Four members of the public spoke to the commission either in person or online via Zoom. Nick Anthony said he felt the project will not adequately address water control coming from the development. He expressed concern that addressing the flow at the creek for certain parts running through the property could result in water acceleration at other parts.

Kari Griggs said the entire area needs to have drainage addressed, not just the Chandler Creek property. Parts of the area are in Washington County's jurisdiction. She said her home has been flooded multiple times.

"I'm just very frustrated. I feel like we have pushed this through," Griggs said. "We keep adding our comments, and we go onto the next thing and don't consider the overall picture and everything that has to go into it to control today's flooding plus the added flooding this new development is going to cause."

Commissioner Leslie Belden said she felt the plans for the project improved significantly over several months. She said when she first saw the plans, she considered the project to be sprawl and had a number of concerns. Some lingering issues lie outside the city's jurisdiction, but the plans are close to the best option for the property, she said.

"The first time I saw this I thought never in a million years would we get to where we are today," Belden said.

• Allowing a planned condominium development at 113 N. East Ave. with 21 bedrooms to have seven parking spaces.

• Rezoning an acre on 54th Avenue south of Wedington Drive for multifamily development up to 6 units an acre.