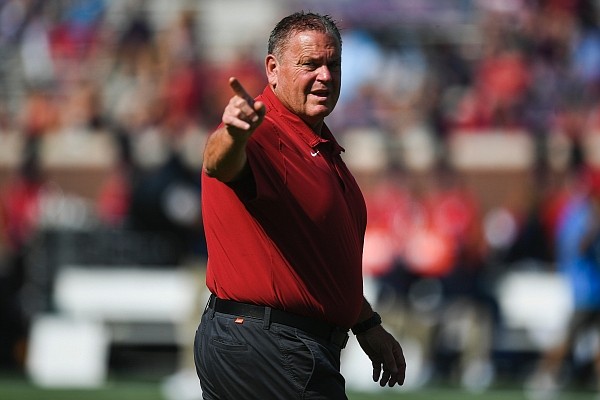 Arkansas coach Sam Pittman gestures toward the field on Saturday, Oct. 9, 2021 before a football game at Vaught-Hemingway Stadium in Oxford, Miss.

ESPN 4-star junior linebacker Raul Aguirre recently spoke with University of Arkansas Coach Sam Pittman, and that carries a lot of weight with him.

Aguirre said Pittman was impressed after watching film of Aguirre recording 17 tackles and having a pass breakup in a big 39-35 victory over Griffin, Ga., in a Class 5A matchup on Oct. 1

“It was big. He was telling me how much he wants me and how good of a player he thinks I am,” Aguirre said. “I had a nice game this past two weekends and he saw it. He tells me I fit his program and to have a head coach tell me that is very big to me.”

As a sophomore, Aguirre attended Locust Grove (Ga.) Cedar Grove, where Arkansas running backs coach Jimmy Smith led the Saints to state championships in 2016 and 2018 before leaving for Georgia State in 2019 and Fayetteville the following season.

Aguirre, who has known Smith since his eighth-grade season, said Smith reminds him of a past conversation they’ve had.

“I remember one time he told me he’s going to need me at Cedar Grove and now to see him at a university, looking back and telling me, ‘Remember I told you that? I now need you over here,’” Aguirre said. “For you to know a coach that long and him still keep up with you and still want you, that’s very exciting.”

ESPN also rates Aguirre the No. 5 inside linebacker and the No. 161 overall prospect in the nation for the 2023 class.

He along with about 20-plus former Cedar Grove teammates, including running back commitment Rashod Dubinion, visited Arkansas on June 14 for a camp.

Interaction with Smith, other coaches and some of the Razorback players were highlights of the June trip to Fayetteville, Aguirre said.

“I like the atmosphere and all that,” he said. “Coach Jimmy showing us a good time. Just being able to have a great time. Being at the camp and dominating at the camp, it was just very exciting.”

An excellent student, Aguirre is considering majoring in sports science with hopes of staying involved in football after his playing days are over. He recently spoke with his father about visiting Arkansas again.

“For sure I’m going to be down there for a game, of course, just don’t know when,” Aguirre said.

“I speak to him when I can,” Aguirre said. “Whenever we speak, it’s all love.”