Tentative settlement $300,000 between Little Rock and Bradley Blackshire's estate; Municipal League will foot most of sum 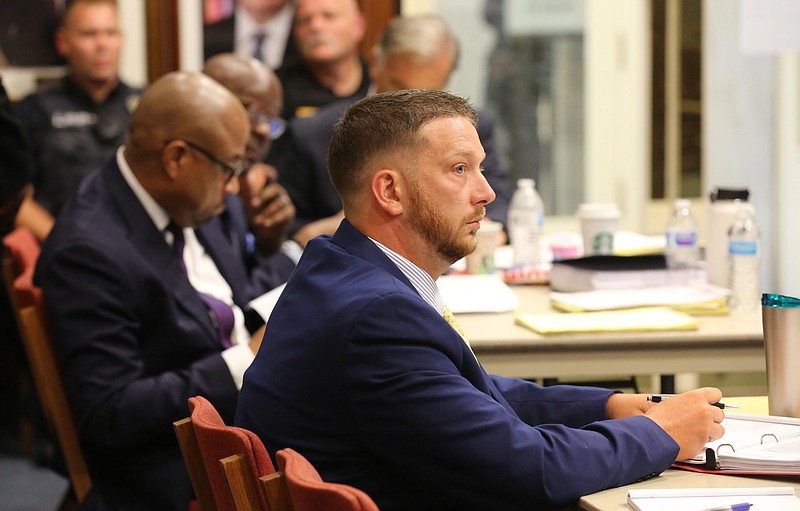 A proposed $300,000 settlement meant to end litigation brought against Little Rock by the estate of Bradley Blackshire, who was killed by then-officer Charles Starks in 2019, would have the Arkansas Municipal League pay $250,500 and the city pay $49,500 to settle all claims, a Municipal League official said Monday.

The group's general counsel, John Wilkerson, described the proposed settlement's monetary terms -- as well as certain nonmonetary provisions -- in an email to the Arkansas Democrat-Gazette on Monday.

The lawsuit, filed in 2019 in U.S. District Court for the Eastern District of Arkansas, named the city and Starks, as well as Michael Simpson, who was the first Little Rock officer to arrive at the scene as backup.

Blackshire, a 30-year-old Black man, was fatally shot by Starks, who is white, when the officer encountered Blackshire driving a vehicle that had been reported stolen.

The shooting set off a chain of events in which Starks was cleared of criminal wrongdoing by local prosecutors but terminated by Police Chief Keith Humphrey for violating departmental procedure. He was reinstated by a judge's order before ultimately resigning last year.

City officials declined to provide details of the settlement terms at the time.

"The City of Little Rock has reached an agreement in Walls v. City of Little Rock, subject to the Probate Court's authorization. The City will have no further comment until the final agreement is signed by all parties and accepted by the Court," city spokesman Spencer Watson wrote in an email Friday.

The same day, Little Rock City Attorney Tom Carpenter told the Democrat-Gazette he had not been consulted about the terms of the settlement and said no one had asked his office's opinion.

An attorney for Britney Walls, who serves as the special administrator of Blackshire's estate, noted in a court filing Friday that the settlement must still receive the approval of a probate court before claims are dismissed.

The city and Simpson were represented in the litigation by attorneys for the Municipal League, which had tapped outside counsel from the Kendall Law Firm and the firm of Harrington, Miller, Kieklak, Eichmann and Brown.

Starks was represented by Robert Newcomb, a local attorney who frequently represents police officers in court. Newcomb told the Democrat-Gazette last week that a separate settlement had been reached with his client.

In a short letter filed with the court Monday, Newcomb told the judge that he and Starks were in agreement with the estate's settlement with Little Rock should the city approve the conditional offer.

Proposed settlement terms were first reported by the Arkansas Times on Monday.

The nonmonetary provisions to the settlement laid out in the email from Wilkerson would have the Police Department's training division along with the city's Little Rock Television staff produce a video featuring one of Blackshire's relatives "in which the person will explain how Mr. Blackshire's death has impacted members of his family."

That video must be shown to each police recruit class for at least 10 years and can continue to be screened for recruit classes thereafter, according to Wilkerson.

Additionally, Little Rock is to provide information about affordable mental health counseling to families of individuals killed by police.

The city must provide the estate with the information it intends to provide to families within six months of the settlement agreement.

Finally, the terms of the proposed settlement say the Police Department must "provide additional training on the subjects of the use of force and de-escalation tactics to hopefully avoid the use of force where possible," including training on when it is appropriate to draw a firearm and how to approach an occupied vehicle during a high-risk encounter.

Like the information on mental health counseling, the city must provide Blackshire's estate with a written description of the additional training.

However, the terms of the proposed settlement note that "the type, manner and extent" of the additional training will be left to the sole discretion of the Police Department's staff, and training modifications can be made without notice.

When asked if it is the opinion of the Municipal League's attorneys that any settlement must receive the approval of the Little Rock Board of Directors, Wilkerson wrote that his understanding was "the Board is not required to approve a settlement in which the City will spend less than $50,000 on that settlement."