TELEVISION: Violent 'Squid Game' is deep, worth the hype 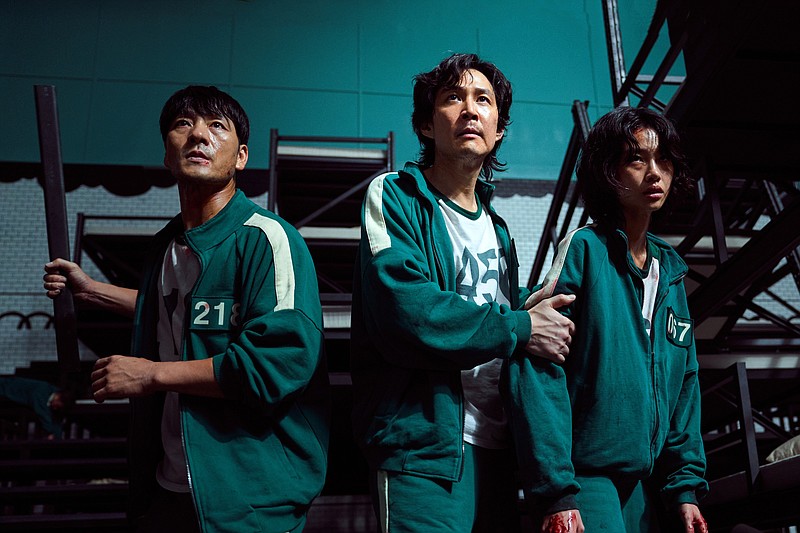 When a new series called "Squid Game" popped up on Netflix last month, some social media users assumed it was a new competition reality show. Thankfully, the ultraviolent thriller — in which people participate in children's games with a deadly twist — is purely fictional. But like reality TV, it's a window into how human beings treat each other and what we'll do to succeed or, in this case, what we'll do to survive. And people can't stop talking about it.

In the Korean-language series, written and directed by filmmaker Hwang Dong-Hyuk, hundreds of debt-ridden people sign up to compete for billions of South Korean won (roughly $38 million) under mysterious circumstances. One of the players is Seong Gi-hun (Lee Jung-jae), a divorced man who lives with his elderly mother, rarely sees his 10-year-old daughter and, thanks to a gambling addiction, owes hundreds of thousands to loan sharks.

After one of his creditors violently tracks him down to collect, Gi-hun signs a cryptic contract in an effort to buy himself more time. We truly see his desperation when he accepts a well-dressed stranger's challenge to play a popular South Korean game in which players attempt to flip tiles of folded paper, for a bet of 100,000 won (a little more than $84 in the United States). Since G-hun is broke, he agrees to receive a slap in the face for every round he loses.

Many rounds later, Gi-hun leaves with a scarred and reddened face, 100,000 won and a business card that includes several symbols — and a number to call if he wishes to play more games for money. Confronted with the weight of his failures, Gi-hun calls the number and is given a location from which he is picked up by a masked individual in a van filled with other prospective players. The van fills with sleeping gas and when Gi-hun wakes up, he's in a warehouse in an unknown location with hundreds of others. The players are all dressed in the same green-and-white track suits and Gi-hun realizes that he is player No. 456.

Masked men wearing red jumpsuits appear; one explains that the players will participate in six games: "Those who win all six games will win a handsome cash prize." When a few of the players object, their massive debts are revealed to the group.

"Every person standing here is living on the brink of financial ruin," he says as a large screen plays footage of players being slapped repeatedly in an effort to win a small prize. Several in the crowd hang their heads in shame. But the extreme stakes aren't revealed until the first game, "Red Light, Green Light," when the players come to the horrific realization that being eliminated from the game means a brutal death.

Though many of the players struggle with the circumstances of the game, the majority actively choose to remain at the compound, where everything is methodical — from meal distribution to the violence that escalates with each game. As their stories come into full view, "Squid Game" becomes much more than a gory dystopian thriller. It's a haunting microcosm of real life, unpacking the many implications of inequality, which has in some way drawn each of the players to this battle for their lives.

Since its Sept. 17 debut, "Squid Game" has become a political talking point in South Korea, and, as Deadline reported, quickly surged to Netflix's Top 10 rankings in the United States — becoming the first Korean show to do so — and has become a worldwide hit. Ted Sarandos, Netflix's co-chief executive, said recently that the show is primed to become its most-watched original series.

"Squid Game" has become an internet obsession, spurring memes and TikToks. In a recent Variety interview, Hwang said he kept the show's ruthless games "simple" so viewers could "focus on the characters, rather than being distracted by trying to interpret the rules."

"I wanted to write a story that was an allegory or fable about modern capitalist society, something that depicts an extreme competition, somewhat like the extreme competition of life," he told the magazine. "But I wanted it to use the kind of characters we've all met in real life."

The characters represent the best and worst of human beings, and how they compete in the deadly games — at the whim of an unidentified entity — is far more illuminating than how they accumulated their debts.

As conflicts flare between games, players build uneasy alliances. Their compelling backstories are juxtaposed with one particularly suspenseful story line that offers clues about the men in red jumpsuits, who are bound by strict rules designed to hide their identities at all times. The power they wield over the players is supervised by an enigmatic figure dubbed the Front Man, who wears a distinct, more obscure mask. Their identities and motivations are one of the show's biggest mysteries, along with those of their benefactors.

As in life, the answers to these questions don't come easily or without disappointment. In some ways, they are more brutal than the games themselves.