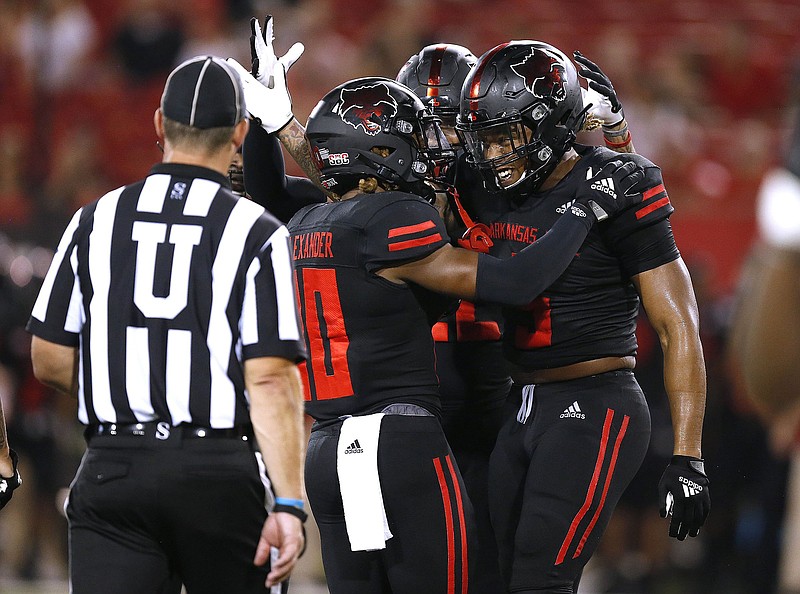 A cursory glance at Arkansas State's 2001 football season reveals little about the program's history. It was the final year of Joe Hollis' tenure as head coach, a stretch in which ASU went just 13-43, and all but two of the defeats came by double digits that season.

There's little recorded about the contest. It wasn't televised and play-by-play data can't be found. Individuals who participated in the game recall little more than the final score.

Twenty years ago today, the trip to Lafayette, La., kickstarted a partnership between ASU and the Sun Belt Conference that has since seen the pair rise in tandem, including a six-year stretch in which the Red Wolves captured at least a share of the regular-season conference title five times.

Getting it to work

The late 1980s and 1990s were a time of tumult at ASU. The Indians had played for the Division I-AA national championship in 1986, but once ASU decided to move up to Division I-A (now the Football Bowl Subdivision), longtime coach and athletic director Larry Lacewell bolted for the defensive coordinator job at Tennessee in 1989.

Al Kincaid, Ray Perkins and John Bobo held the head coaching gig during the next seven seasons, but there was just one winning season. And as both an independent and football-only member of the Big West Conference, the Indians played games just about everywhere -- they had multiple road trips to Wyoming, Nevada, North Carolina, Florida, California and Colorado.

Hollis quickly understood what life as an independent was like when he arrived in 1997. His first game was a 38-7 loss at Georgia. A month later, ASU was walloped 50-0 at No. 14 Virginia Tech. The next season, his team's schedule included a trans-Pacific trip to play at Hawaii.

"We were playing teams that had a lot bigger budgets, a lot better football teams and we weren't giving our players an opportunity to succeed," Hollis recalled. "At the end of our first four or five weeks, we had played a very difficult, uphill schedule. ... Usually, we lost, our morale was low, injuries were up and it made it difficult to win the games that you had an opportunity to win."

Although the Indians returned to the Big West for the 1999 and 2000 seasons, they still had to play at Utah State, Idaho and Boise State.

ASU had been a part of the Sun Belt for nearly a decade at that point in all other sports. The conference reformed at the start of the 1991-92 academic year with Western Kentucky, South Alabama and Jacksonville remaining in league while it merged with American South Conference -- a group of seven schools including ASU -- and added the University of Arkansas at Little Rock.

But the Sun Belt began to consider sponsoring football when Wright Waters became the league's commissioner in 1998.

"When I took over, all the money was tied to being a member of the [Bowl Championship Series]," Waters said. "If we were going to move the Sun Belt to a level different than the Missouri Valley or the Ohio Valley or the Atlantic Sun or any of these other leagues that were basketball-only leagues, I felt like we had to finally find a way to get the football to work."

The timing was fortunate. The Big West halted football at the end of the 2001 season, leaving New Mexico State and North Texas without a home. They joined the Sun Belt as full members, with Idaho coming along for football only.

Middle Tennessee, which had been an independent in football but part of the OVC for all other sports, came into the Sun Belt mix as well, and Louisiana-Monroe accepted a football-only slot.

Those five schools plus Arkansas State and Florida International, which was part of the Sun Belt from 1998-2013, gave the league seven football teams for the 2001 season.

"A lot of the schools were more regionally tied to us," former ASU sports information director Gina Bowman said. "There was ... a comfort level as opposed to being with those West Coast schools, and there was a move to improve the program."

That improvement didn't come right away. It took until the 2005 season for ASU to post a winning Sun Belt record, but its 5-2 finish in league play earned a trip to the New Orleans Bowl, which the Sun Belt helped establish in 2001.

Having the automatic bowl bid for the regular-season champion was a massive boon for the league. As the makeup of the league evolved, teams across the Southeast knew that they'd have a chance to play in the Superdome come late December.

While some players like defensive back Terrence Fuller knew their parents would be able to travel all over, playing a more regional schedule with a potential bowl game in New Orleans was a recruiting tool for schools like ASU. They were also able to tout growing rivalries -- by the 2005 season, the Indians were regularly playing against Louisiana-Lafayette and Louisiana-Monroe, two teams they now play annually, as well as Troy.

"If I could've stayed around a little longer, it would've felt more like a rivalry," said Fuller, who graduated in 2001. "I wish we'd had more rivalries."

The current makeup of the Sun Belt didn't become clear until 2013 when several conferences realigned, bringing Georgia State and Texas State into the fold. Recent years have seen the additions of Appalachian State and Coastal Carolina, which have finished in the final Associated Press top 25 each of the past two seasons.

The 2001 Sun Belt was well down the pecking order of FBS conferences -- not only did it have to contend with the five power conferences but the Big East had four ranked teams including national champion Miami and both the Mountain West and Conference USA had teams in the top 25.

No more is that the case, something Waters credits to current commissioner Keith Gill.

"There was an awful lot of looking for greener pastures, thinking that membership in another conference was suddenly going to make your institution great," Waters said. "Keith has gotten to them and said, 'Hey, if you want to be great, you've got to win games.' ... That's when we started getting better."