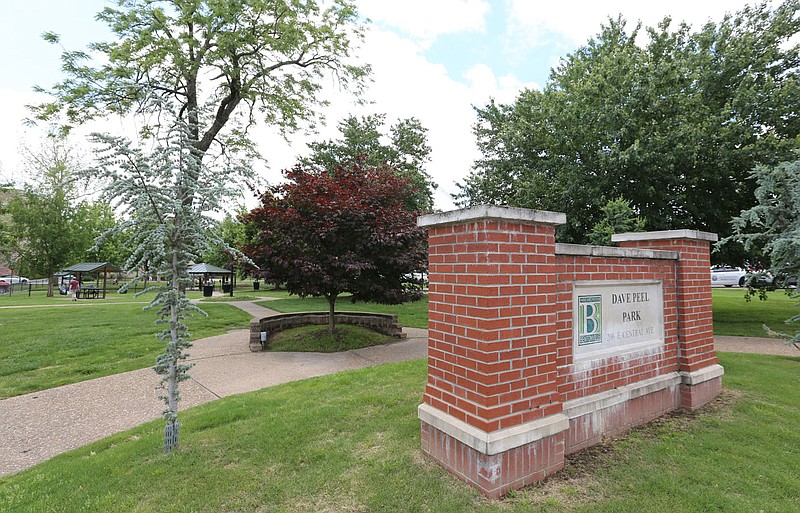 Dave Peel Park Friday, May 29, 2021, located on E. Central Avenue in downtown Bentonville. The Bentonville Downtown Quilt of Parks will receive $5 million from the bond issue to do upgrades to Dave Peel Park and to build The Commons on an empty parking lot. Check out nwaonline.com/210530Daily/ and nwadg.com/photos for a photo gallery. (NWA Democrat-Gazette/David Gottschalk)

BENTONVILLE -- It's back to the drawing board in a sense for the Downtown Quilt of Parks, but David Wright is OK with that.

The plan for Dave Peel Park and the Bentonville Commons will be tweaked to an attempt to appease both sides in the matter, said Wright, city Parks and Recreation Director.

He asked the City Council on Tuesday night for guidance on how to proceed, but a poll among the members ended up with three for the original plan, three for the alternate plan, one abstaining and one member absent.

Wright said he would start meeting with Design Workshop today to get started on what he called a hybrid solution.

"We are not back to square one," he said. "We back to square five. I'm convinced we are heading in the right direction. We need to tweak the plans to satisfy everyone. We are not there yet.

"We are going to go back and adjust the plans to accommodate both sides and do it to both plans."

Dave Peel Park would remain at its present location and the Bentonville Commons would go across the street from the park where a 140-spot parking lot is now under the original master plan. The sites would switch locations under the alternative master plan.

Council members asked to see some buffer designs on the south end of what will be the A Street Promenade that will connect to Lawrence Plaza to the north. The parking lot is in that area. The buffer would separate those who live on that south end from the project.

The buffer would consist of green space and trees and would shrink the footprint for what will be built on the south end, Wright said. Updated design plans could ready in six to eight weeks, he said.

Dave Peel Park is one block east of the downtown square on East Central Avenue. Its fenced playground is set back from the busy street.

There was no official voting on the matter Tuesday night. City attorney George Spence said that council members could be polled on their preference.

It isn't normal to bring park plans to the council, but this is such a big project that he wanted to get council input, Wright said. There is nothing in city code that states the council has to approve park plans, he said.

Public comment at the meeting was pretty much split between the two plans.

The Parks and Recreation Department set up a website more than a month ago to gather feedback on what option residents preferred. Sixty percent of the 1,105 votes favored the alternative location, Wright said.

Voters in April backed the city's $266 million bond plan for capital projects and bond refinancing by approving all nine questions on a special election ballot by at least 76%. The city will pay for the bonds by extending a 1-cent sales tax. The tax was approved in 2003 and extended in 2007.

A renovation of Dave Peel Park and the building of the Bentonville Commons as part of the downtown Quilt of Parks were among the projects voters approved. The bond will provide $5 million.

Both areas are roughly the same size, and both projects are expected to cost the same -- about $2.5 to $3 million each. The city's Advertising and Promotion Commission will contribute $1 million to the projects to go along with the bond money, Wright said.

The commons will allow for a dedicated event area suited for activities such as a farmers market, Friday night movies and musical performances, according to the city.

Wright said he could see the commons' amphitheatre being used in three-hour blocks from Thursday through Saturday nights for 36 weeks a year. He noted the music would mostly come from two- and three-piece bands.

He told the council something like a Megadeth concert wouldn't happen on the commons, saying the music would be more intimate.

The council also approved contracts for a new Fire Department training facility that was approved earlier this year as part of the bond election. The cost of the facility is $3.9 million.

The five-story fire training and burn building will increase firefighter safety during training, provide training flexibility and consistency, meet regulatory standards and reduce environmental impact, according to the city. It will be built on Southwest Aviation Drive on land purchased from Helping Hands earlier this year.

The council also heard a presentation about the city's bill from Southwestern Electric Power Co. from the winter storm in February. The bill was $20.4 million including a $17.9 million fuel charge. The city hired BKD Inc. to review the bill, but nothing out of line was found. The city will now begin to set up payment, taking half from city utility reserve and perhaps issuing a utility bond for the other half, said Jake Harper, director of Finance and Administration.

• An agreement with Osmose Inc. to perform a joint-use audit on the Bentonville Electric Utility Department system for $57,121.46.

• A contract with Utility Services Co. Inc. in an amount not to exceed $694,480 to provide repairs to two water tanks on Southwest I Street damaged during the winter storm in February. The $25,000 deductible will be funded by Water Utilities Reserves. FM Global Insurance has approved coverage of $588,549 for repairs and will address additional costs presented as contingencies ($105,931) as the need arises. The city’s responsibility is $25,000.

• A contract with Garver LLC to perform services for the Municipal Airport. This is a master agreement for airport consulting services. Individual tasks and projects will be handled with separate work orders. The contract term is three years eligible for two one-year extensions.

• A budget adjustment of $27,435 to Banner Fire Equipment Inc. to repair the hydraulic ladder turn table on a 2000 model fire truck, and transportation to and from Roxana, Ill.

• A contract with Ozark Tennis Academy as the Parks and Recreation Department’s tennis professional for 2022 tennis programming. The initial contract term will be one year, renewable annually for a maximum term of five years.

• An agreement with Black Hills Energy Arkansas Inc. for a right of way easement for a gas line crossing park property near the Crystal Bridges Trail.

Print Headline: Buffer plans to be looked at as part of Bentonville parks project