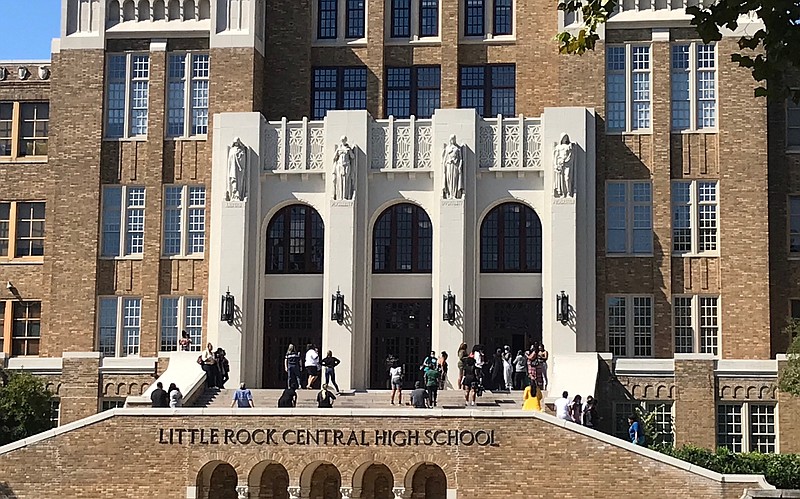 People stand outside Little Rock Central High after a report of shots fired at the school Monday. (Photo by Tommy Metthe)

Gunshots near Little Rock Central High School led to a lockdown and an early dismissal of students Tuesday, after at least two bullets hit the building near students.

There was no active shooter at the school, and "no one was hurt on our campus," said Little Rock School District Superintendent Michael Poore. Little Rock Police Chief Kieth Humphrey said there was no reason to think the school or any students were targeted.

Nevertheless, students will attend classes virtually today, Principal Nancy Rousseau wrote in an email Tuesday afternoon. In the email, Rousseau also dismissed as "bogus" a photo circulated on social media that purported to show a student lying wounded outside after the shooting.

During a news conference Tuesday afternoon, Poore sought to dispel rumors that caused fear among parents, and Humphrey acknowledged that misinformation is common in situations like this.

"I'm pretty sure parents thought this was an active shooter," Humphrey said.

Poore confirmed that at least two bullets hit the building, with one breaking the window of a classroom that had students inside and another hitting the wall near students eating lunch outside.

"It did come that close," he said.

The shots came from south of the school, with police working at a crime scene just past 17th and Dennison streets. At least 10 shell casings were found in the street and marked as evidence. Bullets also struck at least one parked vehicle that belonged to a student.

Rousseau said in an email sent to parents shortly after reports of the gunfire that the shooting was unrelated to anything at the school.

"The incident did not have anything to do with our school, but as a precaution, we made the decision to go into temporary lockdown for the safety of students and staff," Rousseau said in the email.

By 12:10 p.m., parents had started arriving at the campus to pick up their children. Students were dismissed from campus around 1 p.m.

Poore praised Rousseau's reaction time, saying the principal sent at least three emails to parents keeping them updated about the situation, with the first two coming within 45 minutes of the shots.

Mental health counselors will be on hand to speak with students, Rousseau wrote in another email to parents, adding that the day's events "shook up everyone."

"Thank you for your support today which was the most difficult day of my tenure," said Rousseau, who is in her 20th year as Central's principal. "I am so very grateful that all of our children and staff are okay."

Humphrey said police officers had identified a vehicle that may have been involved, and the investigation is ongoing. He said the Police Department plans to refer the person responsible to a federal prosecutor to emphasize the seriousness of the crime.

Mayor Frank Scott Jr. took a hard line toward the perpetrator during the news conference, warning that it is "for dang sure not acceptable to shoot at Central High."

Humphrey also expressed frustration with the frequent shots fired and illegal guns seized within the city, saying it is "getting old."

"There are people that think guns are toys and don't recognize the seriousness," Humphrey said.