Cabot teacher selected as state Teacher of the Year for 2022 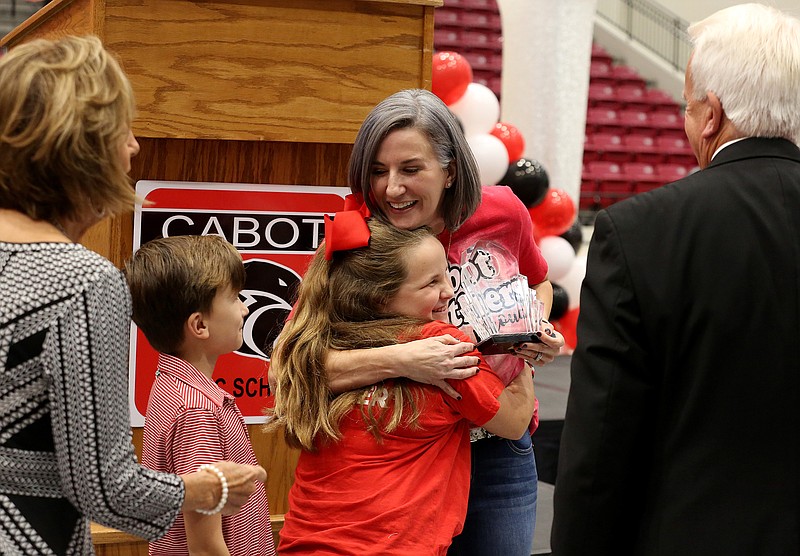 Jessica Saum gets a hug from her daughter, Maggie, 8, after Saum had been named the 2022 Arkansas Teacher of the Year on Wednesday, Oct. 12, 2021, in Cabot. (Arkansas Democrat-Gazette/Thomas Metthe)

CABOT — Jessica Saum, a teacher of kindergarten-through-fourth-graders with special needs at Stagecoach Elementary School in Cabot, was named Arkansas’ Teacher of the Year for 2022 at a surprise ceremony Wednesday.

The 38-year-old native of Columbia, S.C., was cited for her innovation in exposing her pupils to a wide range of opportunities, and for her advocacy for improved resources and support for military families as they make frequent moves into new states and into new schools.

“This is just the honor of a life time,” she said after the announcement. “And the opportunities it is going to provide for me to be a voice for Cabot, for Arkansas … for my students and for the military community, I am filled with so much joy and so much appreciation for everyone who has helped me get to this point.”

Saum, who has been teaching self-contained special education classes of children at Stagecoach since 2018, will now compete for National Teacher of the Year honors.

She will also receive a one-year leave of absence from her Cabot job starting in July to serve as a teacher ambassador for the Arkansas Department of Education and as an ex officio member of the State Board of Education.

In addition to the $2,000 she has won for being one of 12 regional finalists in the Teacher of the Year competition and one of four semi-finalists for the state honor, she will also receive $14,000 for the top honor — all provided by the Walton Family Foundation of Bentonville.

Saum said Wednesday that she will likely use a portion of the prize money for a holiday trip to The Azores islands of Portugal with her children, Tucker and Maggie, to visit her husband, U.S. Air Force Lt. Col. Shane Saum, who is stationed there for a year.

Saum’s husband and Gov. Asa Hutchinson both congratulated Saum via video messages as part of the Wednesday celebration.