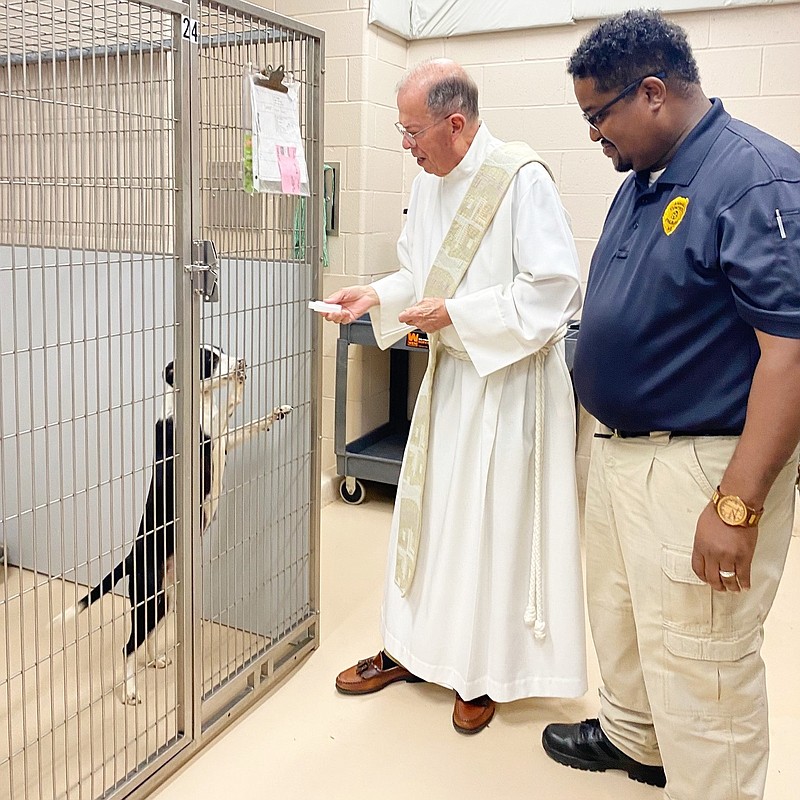 Left, Bud Bryant, a deacon at St. Joseph Catholic Church, conducts the Blessing of the Animals at Pine Bluff’s Claws and Paws Animal Shelter as Marcus Graydon, director of Pine Bluff Animal Control, looks on. (Special to The Commercial)

Catholic Daughters of the Americas at St. Joseph Catholic Church at Pine Bluff hosted the Blessing of the Animals at two events recently.

On Oct. 2, Catholic Daughters, Court #564 Our Lady of Victory, hosted the blessing at St. Joseph Parish in honor of St. Francis Feast Day, according to a news release.

Bud Bryant, a deacon at St. Joseph, officiated at the service. Parishioners and others attended. Refreshments and door prizes followed the service.

On Oct. 4, Bryant and members of Catholic Daughters continued the Blessing of the Animals at Pine Bluff's Claws and Paws Animal Shelter. Bryant blessed more than 40 dogs and 20 cats, according to the release.

As the animals were blessed, Trudy Pascale, past state Catholic Daughters regent, and Connie Boutwell, current state regent, gave treats to the animals.

Marcus Graydon, director of Pine Bluff Animal Control, was presented with a statue of St. Francis and other items. Both Graydon and Bryant said the Blessing of the Animals should continue next year, according to the release.

During October, the court and St. Joseph Church will collect items for the animal shelter.