EU to send $1.15B in aid to struggling Afghanistan 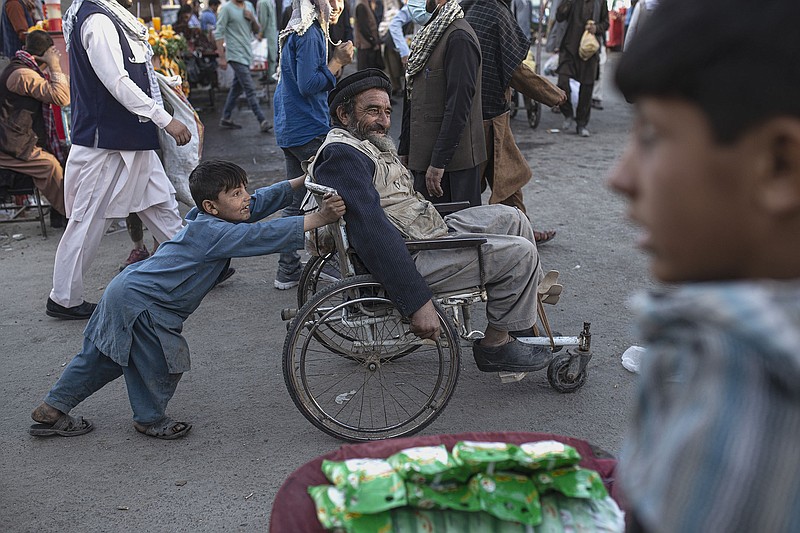 A boy pushes a man in a wheelchair trough a market in Kabul, Afghanistan, Tuesday, Oct. 12, 2021. (AP Photo/Ahmad Halabisaz)

ROME -- With Afghanistan cut off from foreign support and plunging into an economic crisis, the European Union pledged a $1.15 billion aid package during a virtual Group of 20 summit, calling it a step to avoid "catastrophe."

But for all of Europe's urgency -- part of it driven by anxiety about spillover migration -- other nations, representing the largest economies, did not step forward with comparable measures.

The summit -- in which President Joe Biden participated, but Chinese President Xi Jinping and Russian President Vladimir Putin did not -- ended with a general agreement about the importance of providing a lifeline to Afghanistan's people as conditions worsen.

[Video not showing up above? Click here to watch » https://www.youtube.com/watch?v=9wvoOXp3Mio]

"We must do all we can to avert a major humanitarian and socioeconomic collapse in Afghanistan," Ursula von der Leyen, the European Commission president, said in a statement.

At the summit, Biden addressed the leaders of the G-20 virtually as they discussed the "critical need to maintain a laser-focus on our enduring counterterrorism efforts" as well as ensuring safe passage for those seeking to leave the country, according to the White House.

The participants also reaffirmed their commitment to provide humanitarian assistance straight to the Afghan people through international organizations rather than via the new government.

A summary provided after the summit by Italy, which holds the rotating G20 presidency, called aid "essential" to avoid humanitarian disaster and prevent "uncontrolled migrant flows from Afghanistan to regional countries and beyond."

"The collapse of the economic and financial system in Afghanistan would impact heavily on the lives of Afghans and on the stability of the country, the region and beyond," the statement said.

The statement also mentioned the importance of preserving access to education for Afghan children -- girls and boys -- and said the rights of women and minority groups must be respected.

"The Taliban will be judged on their deeds," the statement said.

Until the Taliban takeover two months ago, Afghanistan had survived on international aid -- but that inflow has been halted now that nations have cut diplomatic ties. Many of the previously largest donors, including the United States and the European Union, have pressured the Taliban to show progress on issues like human rights and countering terrorism.

Von der Leyen on Tuesday said the EU still needed the Taliban to meet such benchmarks before overall development aid -- rather than this one-time sum -- would be unfrozen.

"But the Afghan people should not pay the price of the Taliban's actions," von der Leyen said.

Aid groups have warned of a pending humanitarian disaster that is grave even by the standards of a 20-year war. The economy is all but stalled. Banks are closed. The primary health care system is on the brink of collapse. The World Food Program said last week that just 5% of households are consuming enough food. More than a million children could face acute malnutrition.

In a press conference after the summit, Italian Prime Minister Mario Draghi said it was crucial to make sure that the banking system in Afghanistan doesn't collapse.

"If the banks collapse entirely, it would be very difficult to continue providing humanitarian assistance," Draghi said.

Speaking to reporters Monday, United Nations Secretary General Antonio Guterres said it was a "make or break moment" in the country, and warned of a "heavy price" if other nations don't help Afghanistan "weather this storm."

The EU aid package, some $350 million of which had already been earmarked, includes funding that will be directed to Afghanistan's neighbors to "enhance security."

The European pledge is significant: The sum goes well beyond what countries like the United States had been offering annually in humanitarian support, even before the Taliban takeover.

Since 2002, the U.S. has given Afghanistan a total of $3.9 billion in humanitarian assistance, according to USAID.

But at the same time, the current money is nowhere near enough to offset the distress. The U.S. Treasury decided in August to freeze some $10 billion in reserves held in New York, a move that contributed to the economic freefall.

The United States offered $64 million at a United Nations donor conference last month, and while Draghi seemed to suggest a new commitment of $300 million Tuesday, a White House official later clarified that was the tally of money for humanitarian assistance already announced this year.

Information for this article was contributed by Karen DeYoung and Cleve Wootson of The Washington Post.

Print Headline: EU to send $1.15B in aid to struggling Afghanistan