Half-dose booster effective, but need for it still unclear by COMPILED BY DEMOCRAT-GAZETTE STAFF FROM WIRE REPORTS | October 13, 2021 at 7:11 a.m. 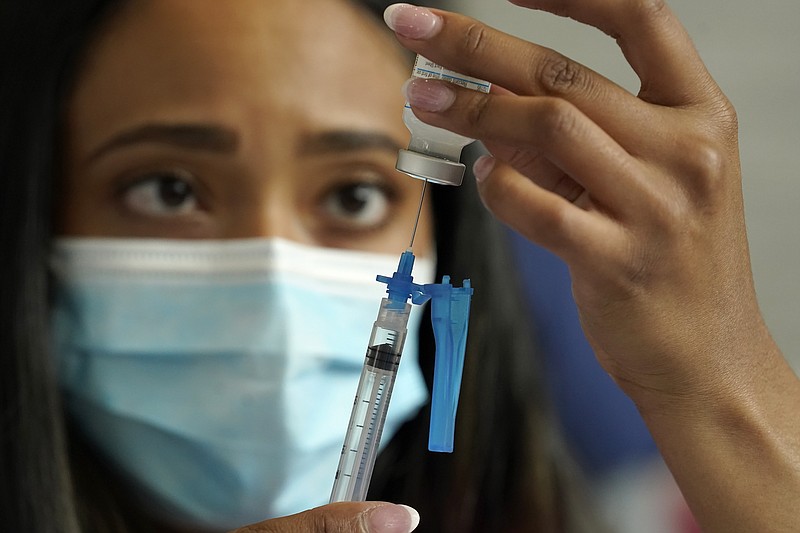 FILE - In this May 19, 2021, file photo, a licensed practical nurse draws a Moderna COVID-19 vaccine into a syringe at a mass vaccination clinic at Gillette Stadium in Foxborough, Mass. Starting Thursday, Oct. 14, 2021, the Food and Drug Administration convenes its independent advisers for the first stage in the process of deciding whether extra shots of Moderna or Johnson &amp; Johnson vaccines should be dispensed and, if so, who should get them and when. (AP Photo/Steven Senne, File)

A Food and Drug Administration review released Tuesday found that a booster shot of the Moderna coronavirus vaccine enhanced virus-fighting antibodies in people who had received the standard two-dose regimen at least six months earlier.

The document, like a previous review of evidence for a booster of Pfizer-BioNTech, struck an ambivalent tone about whether boosters are needed now.

FDA reviewers noted that a half-dose booster shot of the Moderna vaccine topped off the level of antibodies, the most easily measurable barometer of immunity. Moderna said the booster even triggered a 42-fold rise in antibodies able to target the highly contagious delta variant.

But the FDA reviewers also pointed out that the utility of a booster will depend on factors that are unclear at this moment -- such as whether the protection of initial vaccination has dropped substantially.

[Video not showing up above? Click here to watch » https://www.youtube.com/watch?v=surGUTF0HeY]

The document was one of a series posted online in advance of a two-day meeting scheduled for Thursday and Friday at which independent experts will advise the agency on questions related to boosters, including:

• Are extra shots of coronavirus vaccines developed by Moderna and Johnson & Johnson safe and effective?

• Does data suggest people can safely take a booster dose made by a company different from their original shot?

On Thursday, advisers are expected to consider data supporting a third shot of Moderna, which would be the equivalent of a half-dose of the original shot. The booster would be administered at least six months after initial vaccination.

On Friday, they are scheduled to review evidence for a second shot of the Johnson & Johnson vaccine six months after vaccination.

A final decision is not expected for at least another week after a panel convened by the Centers for Disease Control and Prevention will offer more specifics on who should get boosters. Its decision is subject to approval by the CDC director.

The advisers are also scheduled to consider data from a National Institutes of Health trial that tested mixing shots, which could simplify boosting.

A third shot of Pfizer-BioNTech's vaccine has been authorized by the FDA for some people -- including adults 65 and older and people at risk of severe illness or exposed to the virus at work. Moderna is seeking authorization of its booster for the same portion of the population "in the interest of public health," the company said in a document it filed with the FDA.

Johnson & Johnson said its data shows a "favorable benefit-risk profile" for a booster dose in people 18 and older. The company submitted data to the FDA for different options: a booster shot at two months or at six months. Johnson & Johnson said in its FDA submission that a six-month booster is recommended but that a second dose could be given at two months in some situations.

The company released data in September showing that a booster given at two months provided 94% protection against moderate-to-severe covid-19 infection. The company has not disclosed patient data on a six-month booster, but early measures of virus-fighting antibodies suggest it provides even higher protection.

Even without a booster, Johnson & Johnson says, its vaccine remains about 80% effective at preventing covid-19 hospitalizations in the U.S.

A key FDA official overseeing vaccines signaled last week that his hope was to come up with a "harmonized approach" for boosters for people who received any of the three vaccines available in the United States. Peter Marks, director of the Center for Biologics Evaluation and Research, said during a webinar that emerging data may support broad eligibility for boosters of all three shots for anyone 18 or older.

The Moderna findings under consideration include data on third shots given to nearly 350 people. Half received the standard two-dose regimen to start, followed by a booster. The other people got two doses to start but at half the size of the usual regimen before then receiving a booster. The trial measured virus-fighting antibody levels as a way of inferring that the booster would restore protection.

Moderna, in documents submitted to the FDA, cited a study of vaccinated individuals from Kaiser Permanente Southern California that showed vaccine efficacy declined modestly against the delta variant over time, from 94% immediately after vaccination to 80% five to six months after vaccination. Vaccine efficacy was also lower among people older than 65.

Boosters have become a contentious scientific issue, with many scientists and physicians looking at the same data and reaching different conclusions. When Pfizer-BioNTech boosters were considered a month ago, the FDA's review was neutral on whether boosters were widely needed in the general population. Outside advisers strongly rejected the idea of making them eligible to anyone 16 or older, the group that initially received the vaccines under the December authorization.

Instead, the FDA's advisers recommended boosters of the Pfizer-BioNTech shot for people 65 and older and those at risk of serious illness, a population experts broadly agree will benefit from a third shot.

They also thought people exposed to the virus on the job should be eligible. Days later, the FDA authorized the vaccine for those portions of the population.

A CDC advisory committee stopped short of recommending boosters for people exposed to the virus at work. But that committee's recommendation was overturned by the agency's director. CDC Director Rochelle Walensky added a recommendation that people 18-64 at risk of exposure and transmission because of occupational or institutional settings may receive a booster shot.

Some health experts fear the back-and-forth deliberations are muddling the public effort to persuade the unvaccinated to get their first shots. They worry that the talk of boosters will lead people to wrongly doubt the effectiveness of the vaccines in the first place.

The case for boosters relied strongly on evidence from Israel, and a representative from Israel's Health Ministry will again testify to experts, presenting updated data. Israel used the Pfizer-BioNTech vaccine and since the end of August has made a third shot available to people 12 and older.

Information for this article was contributed by Carolyn Y. Johnson of the Washington Post; and by Lauran Neergaard, Matthew Perrone and Bobby Caina Calvan of The Associated Press.