Hamilton letter back with state 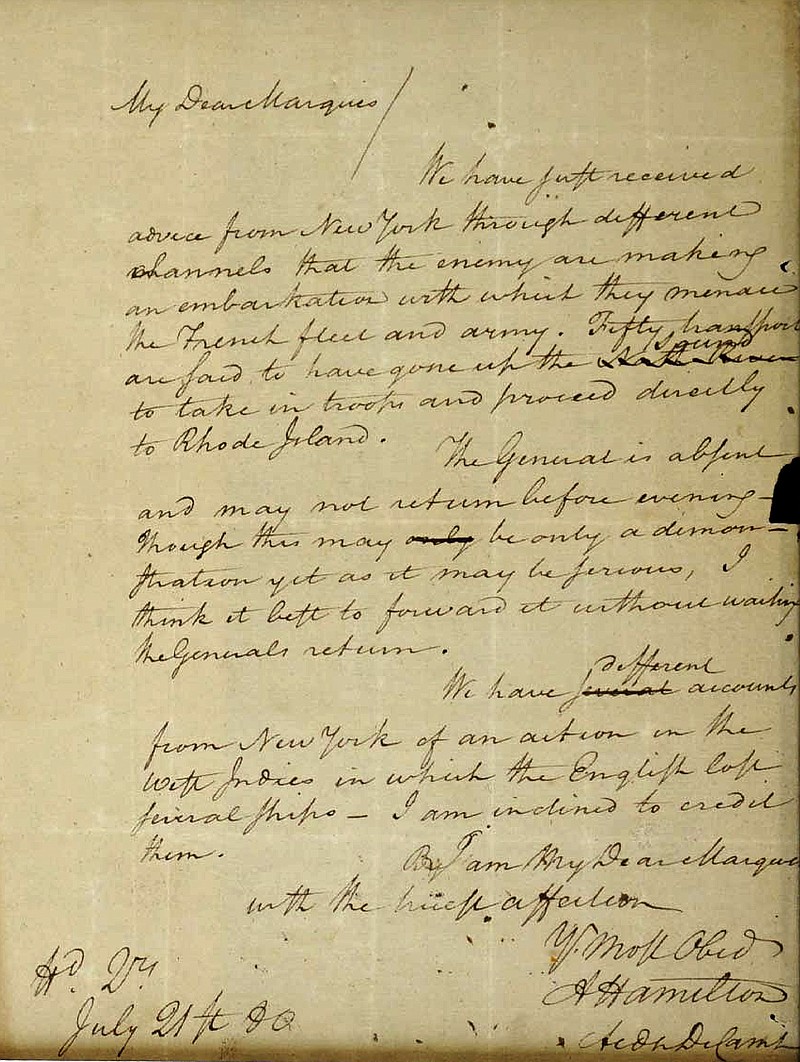 FILE - This image filed May 15, 2019, in federal court as part of a forfeiture complaint by the U.S. attorney's office in Boston shows a 1780 letter from Alexander Hamilton to the Marquis de Lafayette, that was stolen from the Massachusetts Archives decades ago. The letter written by Hamilton during the Revolutionary War and believed stolen decades ago from the Massachusetts state archives was returned Tuesday, Oct. 12, 2021, following a federal appeals court decision. (U.S. Attorney's Office via AP)

A letter written by founding father Alexander Hamilton during the Revolutionary War and believed stolen decades ago from the Massachusetts state archives has been returned after a federal appeals court decision, top state officials said Tuesday.

Secretary of the Commonwealth William Galvin hailed the return after last week's decision by the Boston-based 1st U.S. Circuit Court of Appeals upheld a previous ruling by a district judge.

The letter was reputedly stolen between 1938 and 1945 by a "kleptomaniacal cataloguer" who worked at the archives, according to the court decision.

Hamilton wrote the letter to the Marquis de Lafayette, a French aristocrat who served as a general in the Continental Army. Dated July 21, 1780, the letter resulted in Massachusetts sending troops to Rhode Island "to bolster the embattled French forces," the appeals court wrote.

Galvin, whose office oversees the archives and the Commonwealth Museum, said he was pleased that the court ruled "that this historical treasure belongs to the people." The letter is expected to be put on display at the museum for special events, including the annual Independence Day celebration, Galvin said.

The letter from Hamilton, the first secretary of the Treasury whose profile has soared because of the hit "Hamilton" Broadway musical, appears to detail the movements of British forces.

"We have just received advice from New York through different channels that the enemy are making an embarkation with which they menace the French fleet and army," Hamilton wrote to de Lafayette. "Fifty transports are said to have gone up the Sound to take in troops and proceed directly to Rhode Island."

The cataloguer who likely stole the letter was eventually arrested, and was thought to have pilfered multiple rare documents, some of which were sold to dealers throughout the U.S.

The letter resurfaced several years ago when an auction house in Virginia received it from a family that wanted to sell it. The letter had been in the possession of a relative who died.

The auction house, which estimated that the letter could sell for as much as $35,000, determined that it had been stolen and contacted the FBI.

The estate of the person who possessed the letter claimed it had been purchased legally, but the appeals court disagreed.

Despite the appeals court's decision, the legal saga may not be over, according to an attorney for the party that had tried to sell letter.

"We are disappointed with the 1st Circuit's decision, especially its creation of a seemingly new category of public record, a 'historic public record,'" and the fact it ignored that the letter was not one of the documents the state claimed was stolen, Ernest Badway said in an email.

They may either file a motion for a rehearing with the appeals court or appeal directly to the U.S. Supreme Court, he said.