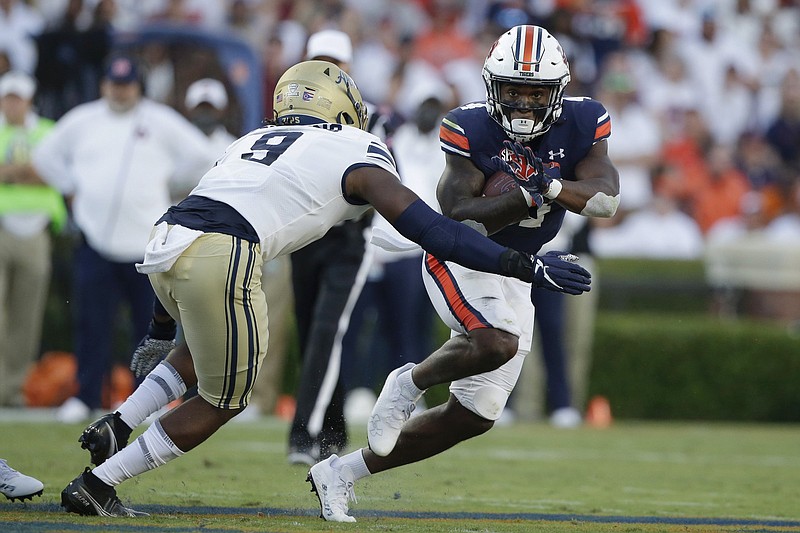 Auburn running back Tank Bigsby (4) carries the ball as he tries to get around Akron linebacker Jeslord Boateng (9) during the first half of an NCAA college football game Saturday, Sept. 4, 2021, in Auburn, Ala. (AP Photo/Butch Dill)

FAYETTEVILLE -- Auburn Coach Bryan Harsin said he hopes to have a more balanced offense when the Tigers play the University of Arkansas on Saturday at Reynolds Razorback Stadium.

In the Tigers' first two SEC games, they had 91 passes and 58 rushing attempts.

Quarterbacks Bo Nix and T.J. Finley combined to complete 24 of 48 passes for 290 yards in Auburn's 24-19 victory at LSU on Oct. 2. Nix was 24 of 43 for 272 yards against Georgia last week when the Bulldogs -- ranked No. 1 in the latest Associated Press poll -- beat the Tigers at Jordan-Hare Stadium.

"Well, yeah, every single week we've been trying to do that," Harsin said at his Monday news conference when asked about trying to establish a run game. "You know, we haven't waited for the Arkansas week.

"That wasn't a preseason plan. We've been trying to do that every single week, and that's something I think most teams want to do. They want to establish the run. We'd like to do that."

LSU jumped to a 13-0 lead over Auburn in the second quarter and was ahead 19-10 with 5:42 left in the third quarter, forcing Auburn to rely more on its passing offense. Georgia led the Tigers 17-3 at halftime and 24-3 in the third quarter to also limit Auburn's ability to call run plays.

"One way to do that is stop losing early," Harsin said of increasing run plays. "We've got to keep the ballgame closer so that you can run the ball more effectively."

Harsin, in his first year at Auburn after being 7-5 in his only season at Arkansas State University in 2013 and going 69-19 seven seasons at Boise State, said facing Georgia skewed the Tigers' rushing numbers.

The Bulldogs are fourth nationally in run defense, holding opponents to an average of 66.8 yards per game.

"We felt like we had to throw it a little bit more to get back into it," Harsin said. "They're good up front."

Harsin said the Tigers want to have the identity of being a physical running team.

"We're just going to have to keep working on it and keep getting better at it," he said. "It doesn't change who we want to be. It doesn't change the fact that that's a goal of ours in the identity of what this offense should look like.

"At the end of the day, we've got to do it. ... Now, that being said, it's not all run. There's got to be some balance, and that balance in the pass game has got to show up."

Nix, a junior in his third season as a starter, has completed 107 of 185 passes (57.8%) for 1,196 yards and 6 touchdowns with 1 interception. Finley, a sophomore transfer from LSU who came off the bench to rally the Tigers to a 34-24 victory over Georgia State when Nix struggled, is 17 of 32 for 275 yards and 2 touchdowns without an interception.

"You don't want to just throw it to throw it for statistics," Harsin said. "You want to throw it so you can complete passes and move the ball and get yourself in position to where you can get some rhythm on the offensive side.

"I think that's what throws do -- they give you rhythm. They give you an opportunity to move the ball and gets other playmakers on the team involved as well, so you're trying to spread that ball around and give guys opportunities."

The Tigers showed at Penn State they could have balance against a quality opponent when they lost to the Nittany Lions 28-20 on Sept. 18. Auburn rushed 40 times for 195 yards and Nix completed 21 of 39 passes for 185 yards.

Freshman Jarquez Hunter leads the Tigers with 465 rushing yards, but 94 of those came on a touchdown run against Alabama State. He has 47 carries.

Tank Bigsby remains Auburn's workhorse running back. He has 84 carries for 458 yards -- including 23 for 102 against Penn State -- and 5 touchdowns. The sophomore, who has seven catches for 53 yards, rushed for 146 yards against Arkansas last season.

Nix is the team's third-leading rusher with 35 carries for 117 yards and 1 touchdown.

"I think he's incredible," Arkansas Coach Sam Pittman said of Nix's dual threat ability. "I mean, he extends plays as good as anybody in the country."

Demetrius Robertson, a senior graduate transfer from Georgia, leads Auburn with 21 receptions for 239 yards and 2 touchdowns. Sophomore Kobe Hudson has 19 catches for 267 yards.

Senior tight end John Samuel Shenker had five catches for 102 yards at LSU. It was the first 100-yard game by an Auburn tight end since 1994 when Andy Fuller had 115 against Florida. Shenker has 19 catches for 256 yards.

Senior outside linebackers Chandler Wooten and Zakoby McClain lead the Tigers with 43 and 38 tackles, respectively.

The Tigers are holding opponents to 104.7 rushing yards to rank 23rd nationally.

"Defensively, to me, they're back to where Auburn's been dominating on the D-line with [Derick] Hall and [Tony] Fair and [Marcus] Harris and [Colby] Wooden," said Pittman, who has faced Auburn the previous eight seasons at Arkansas and Georgia. "They're really good players."

Sophomore J.J. Pegues, 6-3 and 308 pounds, has played on both sides of the ball for the Tigers this season. He's primarily been a backup defensive tackle, but he got some snaps at tight end -- his position last season -- against LSU and Georgia and played on special teams. He has six tackles and hasn't caught a pass this season after having seven receptions for 57 yards as a freshman.

Pegues started at tight end against Arkansas last season and got some direct snaps in a Wildcat package and had two carries for 12 yards.

"His football intelligence is very high," Harsin said. "He understands the game, and that's what allows us to be able to do multiple things with him.

"We will see what that looks like this week and what opportunities he gets on the offensive side. But his focus is on D-line.

"His focus is on the things he does on special teams, and then how we may utilize him on the offensive side depends on what our game plan is going into this week."