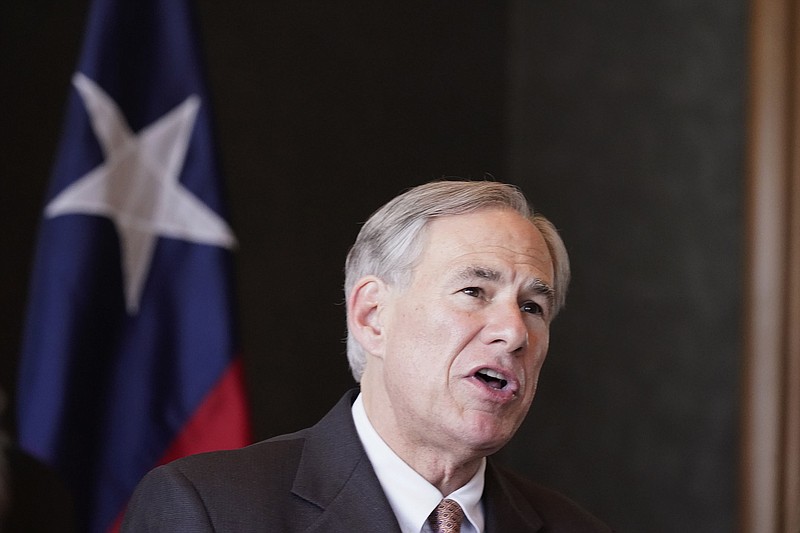 Texas Gov. Greg Abbott's move to ban any entity in his state -- including businesses -- from mandating coronavirus vaccines for workers or customers puts him at odds with some large corporations and with the Biden administration, which last month announced plans to require all employers with 100 or more workers to adopt vaccine mandates or testing regimens.

A number of large private companies in Texas have also issued mandates.

"I think it's pretty clear when you make a choice that's against all public health information and data out there that it's not based on what is in the interests of the people you are governing," she told reporters. "It's perhaps in the interests of your own politics."

"If indeed the mandate now is everyone must be vaccinated or ... tested once a week, we will obviously comply by that mandate," Doug Parker, chief executive of Fort Worth-based American Airlines, said in a Washington Post Live interview in September.

"All along, as we've been going through this, we have been considering mandates and may have done one on our own. But what we wanted to do was do everything we could first to encourage everyone to do so," he said.

Dallas-based Southwest Airlines last week gave all employees until Dec. 8 to get vaccinated or face possible termination. Many U.S. airlines also are government contractors, which must meet a Dec. 8 federal deadline for coronavirus vaccinations.

[Video not showing up above? Click here to watch » https://www.youtube.com/watch?v=Ey_V2uIqDpk]

"According to the president's executive order, federal action supersedes any state mandate or law, and we would be expected to comply with the president's order to remain compliant as a federal contractor," Southwest said Tuesday in an emailed statement.

AT&T, also based in Dallas, in August ordered most of its management employees to get vaccinated by this week. Hewlett-Packard Enterprise, headquartered in Houston, announced a similar move the same month.

Abbott called the Biden administration's sweeping plan "yet another instance of federal overreach," saying in his order that the administration is "bullying" private entities into vaccine mandates, hurting the livelihoods of Texans and threatening the state's economic recovery from the pandemic.

Biden had appeared dismissive of earlier legal threats by a group of Republican governors including Abbott over his vaccine mandates, saying, "Have at it."

Violators will face a fine of up to $1,000, according to the order, which will remain in effect until the Republican-dominated Texas Legislature passes a law that formalizes it, Abbott said. The ban covers any person who objects to vaccination "for any reason of personal conscience, based on a religious belief, or for medical reasons, including prior recovery from COVID-19."

But Abbott, who is fully vaccinated, still urged those eligible to receive a coronavirus vaccine to do so.

In July, Abbott restricted local governments and state entities from levying vaccine mandates. In March, he repealed mask mandates, an order that has since been overridden by some courts in the state.

Abbott is also facing political challenges from within his party, whose most vocal members have railed against vaccine and mask mandates.

Don Huffines, a former Texas state senator who is challenging Abbott for the GOP nomination in next year's gubernatorial race, tweeted that Abbott's move was long overdue.

"Greg Abbott is a political windsock and today proves it," he said. "He knows conservative Republican voters are tired of the vaccine mandates and tired of him being a failed leader."

West recently tested positive for covid-19. He was briefly hospitalized, but also tweeted that he remains opposed to vaccine mandates. West announced Monday on his social media accounts that he had returned home.

State political observers say the issue of vaccinations is generating enthusiasm. Mike Meckler, a conservative activist from Texas who helped found the tea party a decade ago, said the mandate issue is firing up younger people. He summed up the mood among activists as: "If you're not with us, then you're with the fascists."

Lawmakers elsewhere in the nation, hearing voters on vaccines, have taken Abbot's lead. Legislators in Arkansas have introduced vaccine-mandate exemptions, which prompted some concern from business leaders.

"We are tying the hands of Arkansas businesses that want to make their own decision in how best to keep their people safe," said Randy Zook, president of the Arkansas Chamber of Commerce. Some of the state's largest companies, including Walmart and Tyson Foods, have required some or all employees to get vaccinated.

Calls for special legislative sessions to counter vaccine mandates have been heard in states including Wyoming, Kansas and South Dakota, where Republican Gov. Kristi Noem is resisting calls to immediately consider a bill that would guarantee that people could opt out.

Bills are being introduced or drafted elsewhere too, including in swing states such as Ohio and New Hampshire, where the Republican sponsor was elected House speaker after his predecessor died of covid-19.

"We have made it clear that government mandates are not the path to successful vaccination rates and will only cause further division in this country," Speaker Sherm Packard said last month.

In Utah, lawmakers have not taken action, but a record-setting crowd of more than 600 people packed a legislative hearing room last week.

Montana is the only state to pass a law banning private employers from requiring vaccines. The measure includes penalties for business owners of a $500 fine or prison. It is facing two court challenges, from the Montana Medical Association and from a law firm that says the rule interferes with businesses' decisions about how to provide safe working environments.

About 15 million Texans have been fully vaccinated, or just over half of the nation's second-most-populous state, according to The Washington Post coronavirus vaccination tracker. The United States as a whole has vaccinated about 56% of its residents.

Texas' deaths and new daily infections have been gradually falling in recent weeks, after the state suffered increases in both tallies this summer amid the spread of the delta variant of the coronavirus. But a rising death toll from the recent surge has the state rapidly approaching 67,000 total fatalities since the pandemic began in 2020.

Information for this article was contributed by Andrew Jeong of the Washington Post; by Jim Vertuno and Lindsay Whitehurst of The Associated Press; and by Mary Schlangenstein of Bloomberg News.