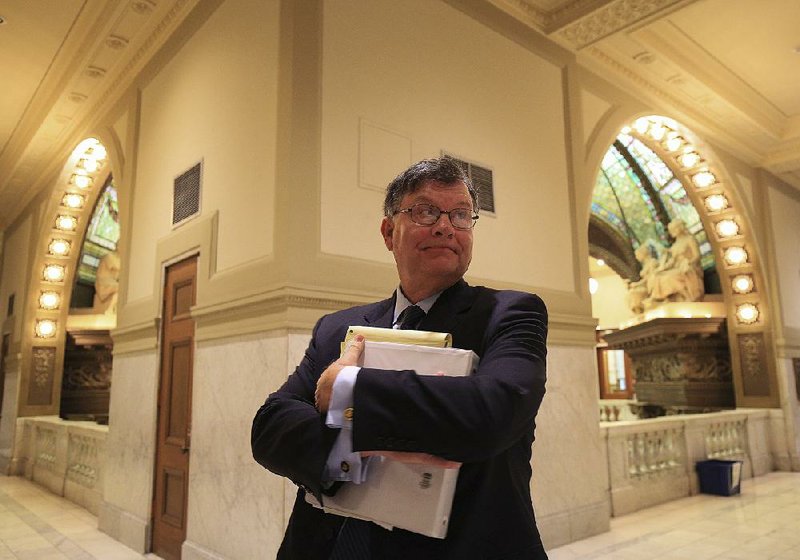 City Attorney Tom Carpenter is shown in this file photo.

Little Rock City Attorney Tom Carpenter on Tuesday raised objections to a proposed $300,000 settlement agreement meant to end litigation filed against the city by the estate of Bradley Blackshire, who was shot and killed by then-officer Charles Starks in 2019.

In his correspondence on the matter, Carpenter argued that the settlement must get the review of the Little Rock Board of Directors, contradicting recent statements from the city's communications staff and an attorney with the Arkansas Municipal League. Both have maintained that the settlement can end the litigation without the board's formal approval.

Securing authorization from the board could mean igniting a debate over the settlement's terms if board members cannot reach a consensus or if they do not agree with what the attorneys have negotiated.

Starks, who is white, shot Blackshire, a Black man, on Feb. 22, 2019, during an encounter in which the 30-year-old Blackshire was behind the wheel of a vehicle that had been reported stolen.

Prosecutors cleared Starks of criminal wrongdoing, but Police Chief Keith Humphrey fired him for violating police procedure. Starks was reinstated on a judge's order, but opted to resign last year.

The Arkansas Court of Appeals recently returned Starks' case to the lower court for further review and reversed a contempt ruling against the city and the Police Department that was issued after the judge reinstated Starks.

Litigation filed on behalf of Blackshire's estate named the city, Starks and Michael Simpson, an officer who was the first to arrive at the scene of the shooting as backup.

Starks is represented by attorney Robert Newcomb, who recently indicated that a separate settlement had been reached between his client and the estate.

According to an email Carpenter sent to city officials Tuesday, particularly concerning to him were nonmonetary provisions in the settlement proposal that would require the Police Department to implement additional training on the use of force and deescalation.

In the email to Mayor Frank Scott Jr. and members of the city board, Carpenter said he had filed a notice with the federal court to say the city's governing body (the city board) "has not yet approved the settlement agreement that has been announced as having been reached."

In the short letter filed with the court Tuesday, Carpenter told U.S. District Judge D. Price Marshall Jr.: "In my position as the Little Rock City Attorney, this letter is to clarify that the governing body of the City of Little Rock has not yet approved any settlement agreement in the above matter. Unless and until that occurs, it does not seem final approval from the Probate Court can occur."

On Monday, John Wilkerson, general counsel for the Arkansas Municipal League -- which has been handling the litigation on behalf of Little Rock, along with lawyers from two outside firms -- told the Arkansas Democrat-Gazette that the terms of the proposed settlement would have the Municipal League pay $250,500 and the city pay $49,500 to settle all claims.

Wilkerson suggested that the city board would not have to approve the settlement agreement because Little Rock would spend less than $50,000. He also described the nonmonetary provisions to the settlement.

In his email to city officials, Carpenter said he had recently spoken with Wilkerson about the matter.

"I agreed Friday not to be concerned if there was no effort to take the case into Probate Court for a quick approval. However, [in] the news articles in the Arkansas Democrat-Gazette and the Arkansas Times, the statements made by the plaintiffs caused great concern," Carpenter wrote.

He went on to say that the proposed settlement's nonmonetary terms, which he described as policy decisions to be made only by city policymakers, caused him "greater concerns."

According to the tentative settlement, the Police Department would have to incorporate additional training on use-of-force and deescalation tactics.

Furthermore, the city would have to produce a video featuring a member of the Blackshire family explaining how his death affected them, which would be shown to police recruit classes for at least 10 years, and provide information about affordable mental health counseling to the families of individuals killed by police.

Carpenter wrote in his email that "for over 30 years the training in the Little Rock Police Department has been attacked in state and federal court, and upheld every time. Many of these cases have withstood attack on appeal to the U.S. Court of Appeals for the Eighth Circuit. Two or three of them have not merited review when sought by the U.S. Supreme Court."

He added, "So, why would the City enter into an agreement which suggests a deficiency in its deadly force training when none has ever been found."

Carpenter later noted, "It is possible that you would wish to sign such an agreement; but, the policy decision belongs to the elected body. That has not been done."

In his communication to the board, Carpenter provided a copy of an email he sent to Wilkerson on Friday. In the message, Carpenter said that while the Little Rock city manager can authorize a "purchase of no more than $49,999.99, such authorization is limited to a competitive bid process."

"Of course, that has not occurred," Carpenter said. "Only the governing body of the City can authorize this expenditure, and it has not done so."

He asked Wilkerson to ensure that the federal court was informed that the city had not authorized a settlement.

On Tuesday, Carpenter wrote to Wilkerson again and later provided a copy of his message to city officials.

"Yesterday, you were quoted in the Arkansas Democrat-Gazette that the Mayor and City Manager could settle a case for the City despite the fact I have consistently stated to the contrary," Carpenter wrote. "Now the City, this office, and the attorneys in this case are at risk if Judge Marshall is not contacted immediately and told that the representation of City acceptance of the settlement terms was premature."

Carpenter raised a variety of other concerns related to the settlement agreement in his follow-up message to Wilkerson.

At one point, he noted that "in this case the offending officer, who was fired for failure to follow City policy, pays nothing and for the first time in its history the City will pay damages for an officer's actions after the officer was fired for these actions."

He went on, "This decision implicates future cases, and requires distinctions that might be interesting, but irrelevant, as to why one case is settled and another is not. Again, this is a policy question only the governing body has the authority to decide about this settlement, and no such decision has been made."

In response, Wilkerson disputed Carpenter's argument, according to a reply provided to the Democrat-Gazette by Bill Mann, another attorney with the Municipal League.

"I'll begin with your statement that I was quoted in the paper saying 'the Mayor and City Manager could settle a case for the City despite the fact I have consistently stated to the contrary.' That is simply untrue," Wilkerson wrote. "You and your office have not consistently stated that the City Manager cannot settle a case on behalf of the City. In fact, quite the opposite is true."

Wilkerson wrote that in his years representing the city, "you and your office have consistently led us to believe that a settlement amount that will cost the City less than $50,000 can be approved by the City Manager without Board approval."

Wilkerson cited settlements in which Little Rock paid sums of less than $50,000 without formal board approval. "As for the rest of your concerns, all I can say is that this is the settlement terms agreed upon by the City of Little Rock," he wrote.

With regard to the possibility of Carpenter contacting the judge, Wilkerson noted that Carpenter was no longer a Little Rock attorney of record in the case based on a conflict he described in an August 2020 motion to withdraw as counsel of record.

That motion said the city attorney's office had submitted the case to the Municipal League in light of the office's "precarious position" related to litigation that had been filed against the city and Humphrey by two of the Police Department's assistant chiefs.

"However, if the Mayor and City Manager would like us to send such a letter, we'll certainly welcome that discussion," Wilkerson added in his email to Carpenter on Tuesday.

Stephanie Jackson, a spokeswoman for the mayor, on Tuesday referred questions about the settlement negotiation and the $50,000 payment threshold to officials with the Arkansas Municipal League. 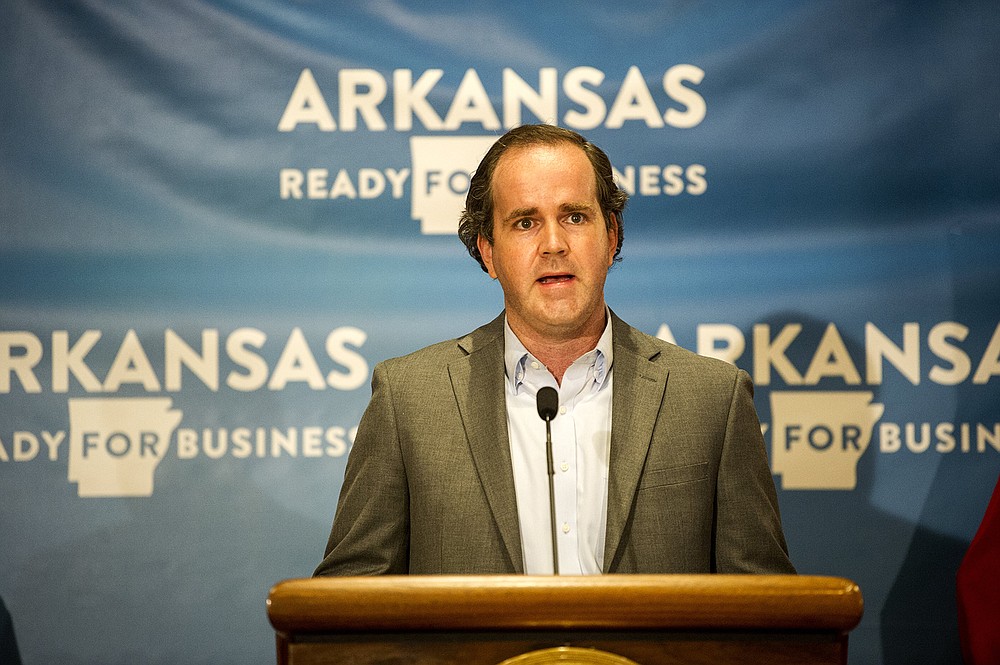 John Wilkerson, General Counsel for the Arkansas Municipal League, addresses the media during an update by the governor on Arkansas' response to COVID-19 on Friday, July 3, 2020. See more photos at arkansasonline.com/74gov/ (Arkansas Democrat-Gazette / Stephen Swofford)