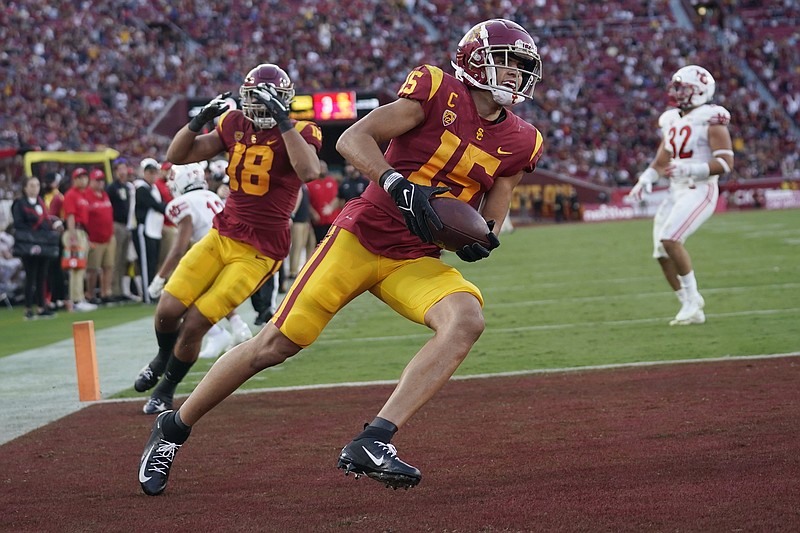 Not only are both divisions in the Pac-12 far from settled but trying to figure out the conference's top offensive player remains a difficult proposition.

Colorado running back Jarek Broussard was last year's Offensive Player of the Year but he has yet to post a 100-yard game as the Buffaloes have struggled to a 1-4 record. Much like Broussard emerged out of nowhere last season, the conference has some contenders who have put up some noteworthy numbers this season now that they have the spotlight to themselves:

The junior leads the nation with 64 receptions and is on pace to tie or break Brandin Cooks' single-season record of 128 set at Oregon State in 2013. London's 832 receiving yards are second nationally, trailing Memphis' Calvin Austin III, who has 837.

After struggling earlier in the season, London has 15 receptions the past 20 times he has been thrown to when coverages have being highly contested.

"I mean, Drake London, that's all you got to say. Playing with a guy like that, that type of caliber, that type of monster, and he's a captain of the team, so that speak for itself," running back Keaontay Ingram said. "But just to have him as a weapon in this offense, you know, it's pick your poison type deal."

London is likely to remain the focal point of the Trojans' offense, especially since a second receiver hasn't stepped up. However, how many more national appearances USC receives the rest of the season is likely to diminish with a 3-3 record and another poor performance in a 42-26 loss to Utah. It is also worth noting that a receiver has not been named the conference's Offensive Player of the Year since USC's Marquise Lee in 2012.

The dual-threat Daniels and the Sun Devils' profile is likely to increase if they can keep winning and rise up the rankings. The junior has the top grade (85.3) among conference quarterbacks, according to Pro Football Focus, and is 27th nationally.

Daniels is the most accurate starting quarterback in the conference with a 70.1% completion rate and is third with 1,269 passing yards. He also has three games where he has rushed for more than 75 yards.

Coach Herm Edwards said Daniels' biggest area of improvement has been not taking unnecessary hits and giving himself up when he has gained the needed yards.

"For the most part, a lot of these quarterbacks in today's world, they are great athletes and you can't script what kind of play he's going to do when he takes off and runs, like you can't practice plays for the defense ... but the unscripted one that pops up, those are the ones that are scary and Jayden is that kind of quarterback. He can go back and he will see some things and when things break down, he can go make a first down for us," Edwards said.

Charbonnet has four 100-yard games and is averaging 6.4 yards per carry as the Bruins seek their first winning record since 2015. The Michigan transfer is second in the conference at 94.3 rushing yards per game. He also has seven touchdowns but has been kept out of the end zone the past two games.

Brown, a graduate transfer from Duke last season, was considered the lead back at the beginning of the season, but Charbonnet had a great start to the season. Brown posted his first 100-yard game last week at Arizona with 146 yards and averaged 12.2 yards per carry.

"I think we have two guys back there that I think anybody in the country would wanna have one of them," coach Chip Kelly said. "We're fortunate that we have two of them, so the fact that we can run Zach and then bring Brittain in, and then run Brittain and then bring Zach in, I think is a real difficult thing for a defense to handle." 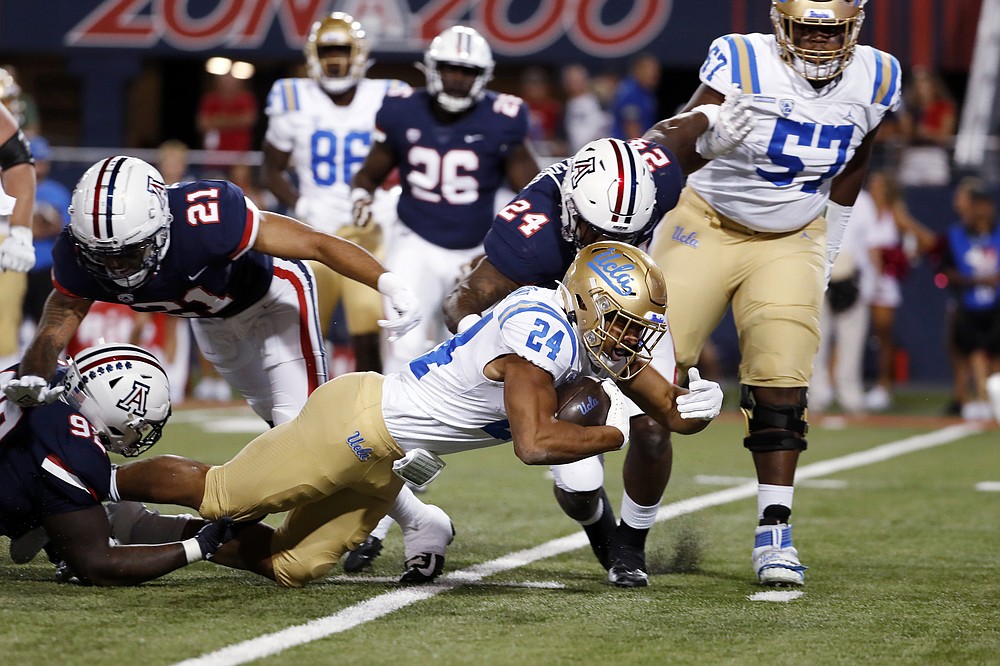 UCLA running back Zach Charbonnet (24) is brought down during the first half of the team's NCAA college football game against Arizona on Saturday, Oct. 9, 2021, in Tucson, Ariz. (AP Photo/Chris Coduto) 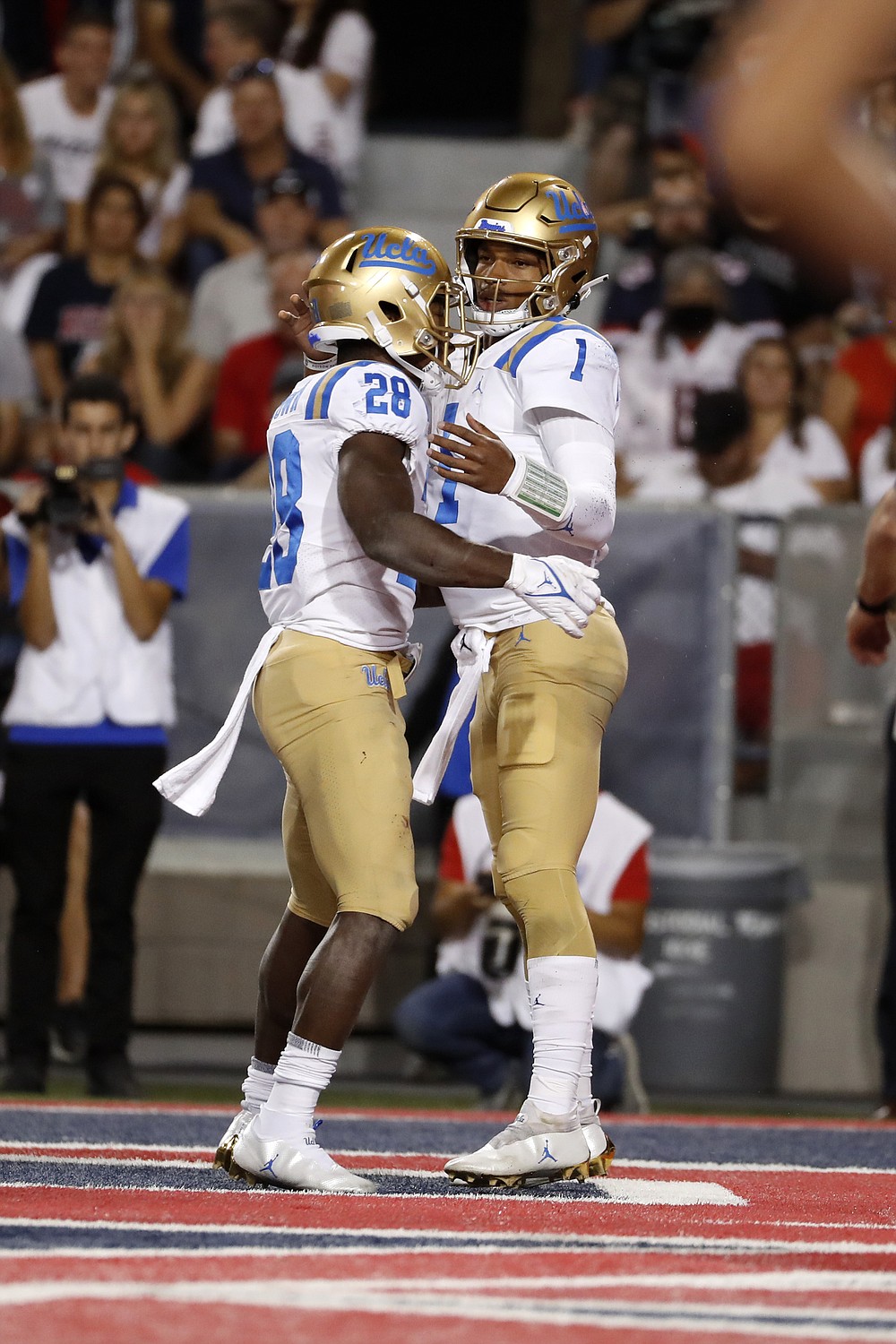 UCLA quarterback Dorian Thompson-Robinson (1) celebrates with Brittain Brown after a touchdown during the first half of the team's NCAA college football game against Arizona on Saturday, Oct. 9, 2021, in Tucson, Ariz. (AP Photo/Chris Coduto) 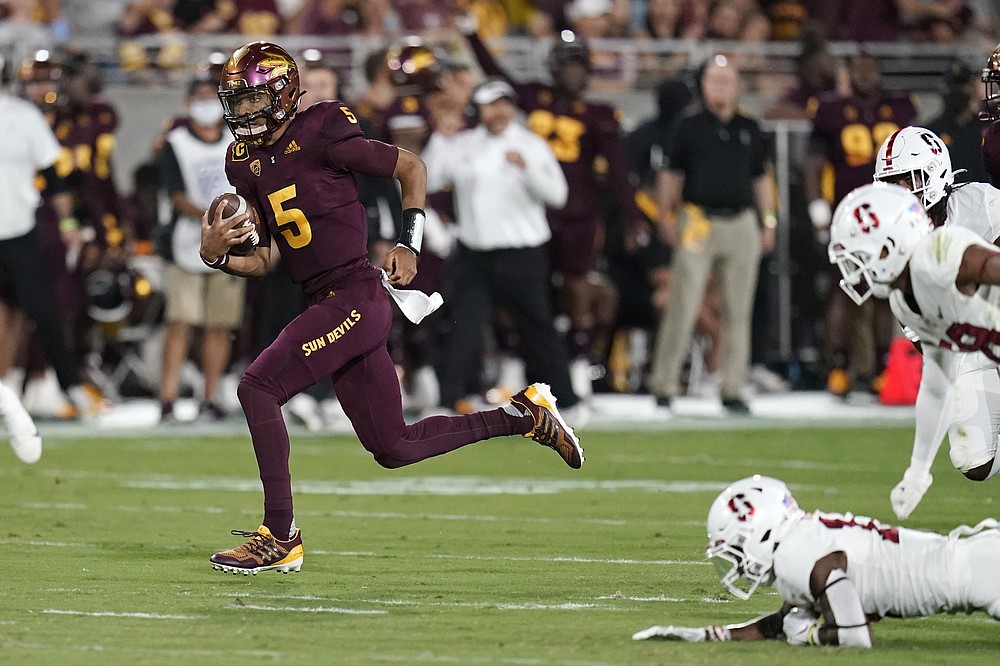 Arizona State quarterback Jayden Daniels (5) gets past the Stanford defense as he runs for a touchdown during the first half of an NCAA college football game Friday, Oct. 8, 2021, in Tempe, Ariz. (AP Photo/Ross D. Franklin) 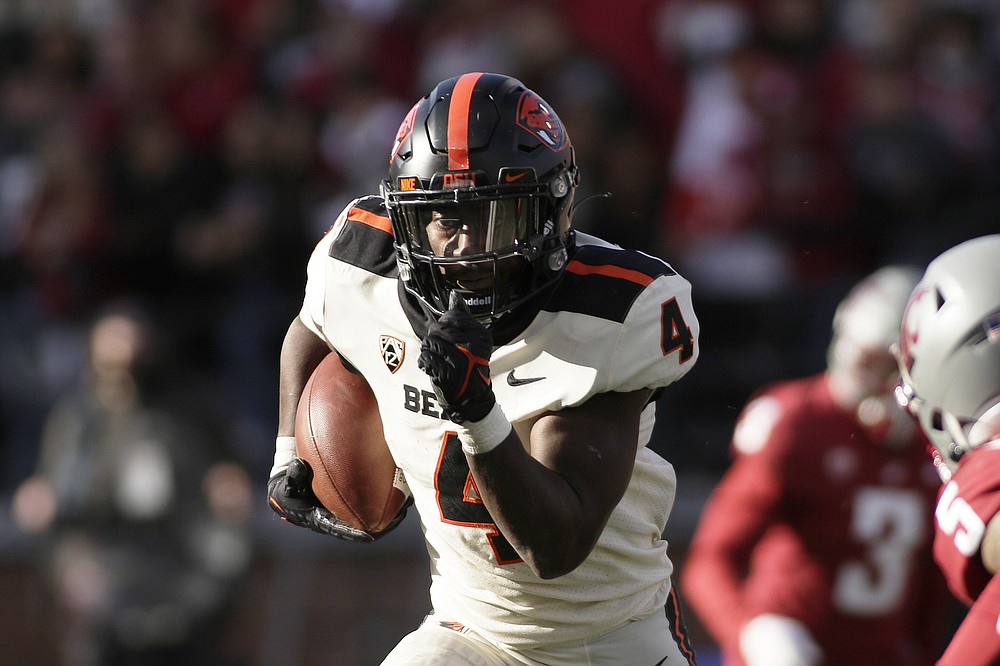