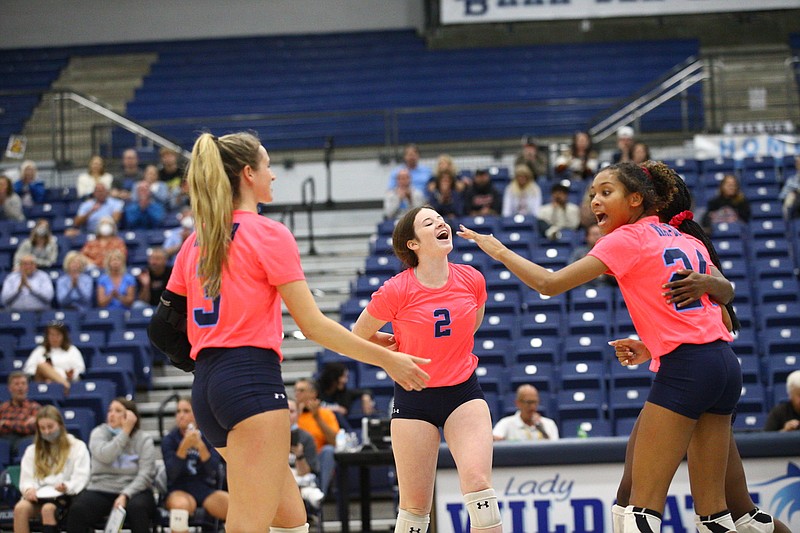 SPRINGDALE -- Springdale Har-Ber volleyball coach Cassie Loyd has been pleased all season with her team's focus and approach.

That didn't change even when Fort Smith Southside took a lead late in the second set against the Lady Wildcats Tuesday night at Wildcat Arena.

Clark said the team, which includes 14 seniors, has matured and has never flinched under pressure this season.

[Don't see the video above? Click here to watch: youtube.com/watch?v=FtJRnqXITuo]

"They've had a lot of pressure on them all season long and we talk about that frequently," Loyd said. "Their sophomore and junior year, I'm not really sure this group would have finished out that second set. Now that they are seniors and they have that experience and that trust in each other. They've put in that work and they know that work is paying off for them."

Har-Ber took a lead early in the opening set and just stretched it out to win handily. But the second set was a different story. Fort Smith Southside wouldn't go away and put together a 6-1 spurt to turn a 16-15 deficit into a 21-17 advantage.

But the undefeated Lady Wildcats persevered. They got kills from four different players and a pair of aces from Josie McCroskey as part of an 8-2 run to earn the win. Har-Ber then started the third set with six straight points and put away the match.

"Right now I think we have a really big target on our back, sweeping the first round of conference," Loyd said. "Southside really put some pressure on us and I was really proud of my girls for the grit that they showed in that second set to kind of chip away at that lead Southside had on us and finish that set off."

Jordan Benford led the Har-Ber attack with a match-high 13 kills, while Kyla Clubb chipped in with 12. Middles Kat Cooper and Kinleigh Hall added eight and seven, respectively. McCroskey finished with five aces and 16 digs -- both match-highs. Setter Caylan Koons dished out 37 assists to go with nine digs and two aces.

Toree Tiffee led the Mavericks (18-9-3, 7-5) with six kills and Lydia Pitts added five. Sophia Neihouse contributed four blocks (one solo) and Olivia Melton had a team-best nine digs for Fort Smith, which currently sits third in the league -- a game up on both Rogers High and Bentonville High.

Har-Ber travels to Rogers High on Thursday before getting set to host second-place Fayetteville in what looks to be a showdown for the conference title in six days. The Lady Wildcats won the first matchup in five sets in Bulldog Arena.

Kennedy Phelan put up another unusual double-double with 11 aces and 18 assists to lead the Lady Purple Bulldogs to an easy 25-2, 25-8, 25-11 win over the Lady Red Bulldogs.

Fayetteville (28-3, 11-1 6A-West) remains a game behind Har-Ber with the showdown in Wildcat Arena looming in a week. Brooke Rockwell led the offense with eight kills, while Maddie LaFata added seven. Ashley Ruff anchored the defense with seven digs.

Myia McCoy had 11 kills and 10 digs for Greenwood, while Landis Luke had 10 kills. Lillyanna Gigerich had 12 digs, while Rylie Holland had 10 digs and nine assists and Ashlyn Dungan nine digs and 13 assists.