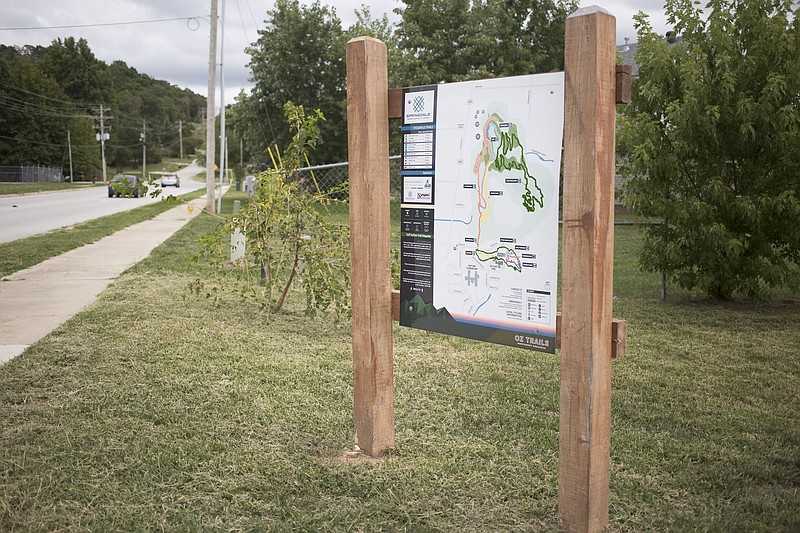 A sign is shown, Saturday, September 12, 2020 at the Fitzgerald Mountain trailhead in Springdale. (NWA Democrat-Gazette/Charlie Kaijo)

SPRINGDALE -- The City Council on Tuesday tabled approval of a campground for bicyclists, asking for further information from the developer. Council members echoed neighbors' concerns because no bathrooms are planned for the project.

The Planning Commission on Oct. 5 denied a proposal by Zach Brothers for a primitive campground near the Fitzgerald Mountain trails. Brothers appealed the denial to the City Council.

The council voted 5-3 to hear Brothers' appeal and then voted to table the item for further consideration and additional information from Brothers. The council will consider the campground during its next committee of the whole meeting Monday night.

City Attorney Ernest Cate said the law allows Williams or any council member to vote on an item as long as the council member has no direct financial involvement.

The land is zoned for single-family residences, but city zoning codes would allow the campground as a conditional use of the property for cultural, recreational or health uses, said Patsy Christie, director of the city's Planning Department.

Brothers plans three primitive campsites, six parking spaces and two parking spots for recreational vehicles 30 feet or smaller in his Fitzgerald Mountain Camp. The parking spaces would not include hookups.

He also would limit the use of the campground to 20 people at a time.

Campers would register and pay for spaces at hipcamp.com -- a program Brothers likened to Airbnb for campgrounds. He would list conditions and rules for camping in his listing on hipcamp, and campers would agree to follow those rules when they booked a campsite.

Brothers changed some of the parameters of his plan after neighbors spoke against the campground during the Planning Commission meeting.

The plan originally included a group camping area and a maximum of 84 campers. The plan submitted to the City Council eliminated the group camp and lowered the maximum to 20 campers.

He also limited camp fires to one shared fire ring trying to address neighbors' concerns about camp fires burning out of control.

Christie said changes each time the proposal is presented are allowed with conditional use requests. She also noted the council could vote to remove the conditional use allowance if the neighbors asked because they experience future problems with the use.

Brothers had planned no bathrooms for the site, noting that campers could use the bathrooms at Bayyari Park, a quarter mile away on the trail. He also considered an "outhouse" with a portable toilet. Or he planned for campers to "pack it out" of the campground as they would be required to do with all waste.

Brothers said bicyclists and campers who used "primitive" campgrounds were familiar with the practice.

Chad Wolf, director of the city's Parks and Recreation Department, noted the bathrooms at the park remained unlocked overnight, except during really cold weather. The department closes and locks the doors to park bathrooms across the city and continues heating the buildings to keep the pipes and fixtures from freezing, he said.

Residents noted the trail from the campgrounds to the Bayyari bathrooms contains rocks and roots that could be tripping hazards in the dark, and they worry about their liability if campers are on their private property. Ramona Latham, who lives nearby on Dodd Avenue, had concerns that campers would instead walk into the nearby woods that mark her property line to use the bathroom.

"I love the idea of camping," said council member Harriman. "But the bathrooms are my sticking point."

After hearing concerns from neighbors and council members, Brothers agreed to contract with a service for portable toilets. He said he will add that to the proposal he will bring to the council on Monday.

Neighbors also said they worried about transients who might stumble on the campground, see the portable toilet and decide to stay.

Janet Hayley, who also lives on Dodd, noted the residents already face frequent trespassers on their property from the trail. "And trespassers are terrifying in the dark," she said.

Latham asked Brothers how he planned to enforce those rules listed on hipcamp.com without a manager on site. Neighbors were not satisfied with Brothers' response of drive-throughs when campers were booked.

She also spoke of the new septic tank on which her family spent thousands of dollars to install recently because of a city requirement. She said allowing the campground to operate without bathrooms seemed unfair.

"His business will bring in dollars for him, but the city of Springdale will pay for the power, the water, the toilet paper and someone to clean the bathrooms," Latham said.

"Why do we need a primitive campground within the city limits of Springdale," Hayley asked. "The Fitzgerald Mountain trails are a daily excursion."