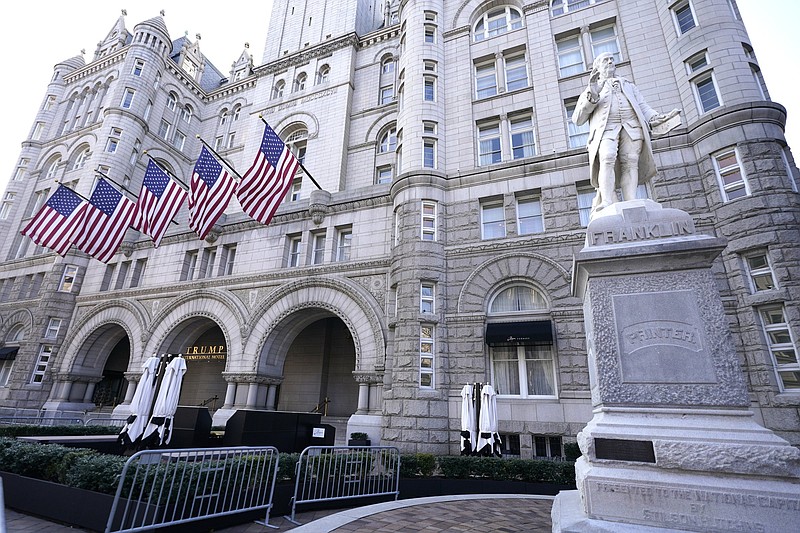 FILE- The Trump International Hotel on Pennsylvania Avenue is seen on March 4, 2021, in Washington. Former President Donald Trump's company lost more than $70 million operating his Washington D.C. hotel while in office, forcing him at one point get a reprieve from a major bank on payments on a loan, according to documents released Friday, Oct. 8, by a House committee investigating his business. (AP Photo/Julio Cortez, File)

The Trump Organization is in advanced talks to sell the rights to its Washington hotel in a deal that could bring more than $370 million.

A Miami-based investment firm, CGI Merchant Group, is in negotiations to buy the lease for the hotel on Pennsylvania Avenue, according to people familiar with the effort, who asked not to be identified because the matter is private.

The deal is not final and Trump Organization remains engaged with other potential buyers, one of the people said.

CGI, led by Chief Executive Officer Raoul Thomas, announced plans last year to partner with retired baseball player Alex Rodriguez on a fund to buy hotels in North America and the Caribbean. The company seeks "to acquire trophy assets with the potential for significant value appreciation," according to its website.

The market for hotel sales has improved in 2021, though the recovery has been strongest for properties in resort destinations. Washington's lodging market has been sluggish, with an August occupancy rate of 54%, according to data provider STR. That was among the worst in the U.S.

Trump's family-run company has been engaged in off-and-on efforts to sell the hotel since 2019, when it floated an asking price of more than $500 million. The pandemic, which brought global travel to a halt, upended the initial effort. The company turned to the brokerage Newmark to restart the marketing push earlier this year.

Trump won the rights to develop the hotel, located in Washington's Old Post Office building, in 2012, leasing the building from the federal government. Trump rejected calls to sell the hotel when he was elected president, and it became the source of consistent controversy, with critics arguing foreign government and other interest groups could gain favor by booking rooms at a property owned by the president's company.

The House Committee on Oversight and Reform recently released documents that showed the hotel received about $3.75 million in payments from foreign governments, but still lost more than $70 million during his time in the White House. The Trump Organization described that report as "intentionally misleading, irresponsible and unequivocally false."