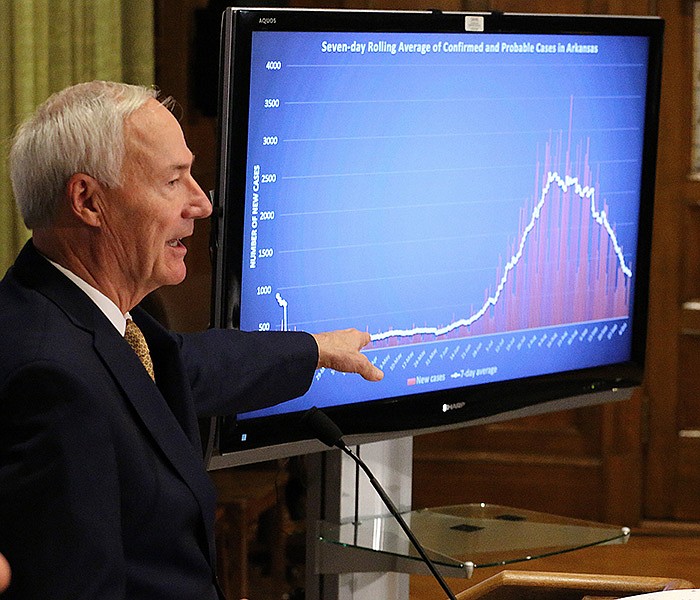 Arkansas Gov. Asa Hutchinson will allow a congressional redistricting plan that would trisect the state’s most populous county and legislation targeting employer-mandated coronavirus vaccinations to become law without his signature, he announced Wednesday.

Arkansas’ population grew to 3,011,524 over the last decade, so lawmakers said they aimed to keep the number of constituents for each U.S. representative as close to 752,881 as possible.

“I am concerned about the impact of the redistricting plan on minority populations,” the governor said during his weekly briefing at the state Capitol. "While the percentage of minority populations for three of the four congressional districts do not differ that much from the current percentages, the removal of minority areas in Pulaski County into two different congressional districts does raise concerns."

Democratic lawmakers and public officials in Central Arkansas have objected that the bills will remove thousands of Black people in Pulaski County from the 2nd Congressional District.

Hutchinson said a number of people had asked him to veto the legislation, but he had decided against it. He noted that the U.S. Constitution gives the state legislature the power to redraw the lines for congressional representatives.

Lawmakers can override a veto with a simple majority in both chambers.

The other two bills, House Bill 1977 by Rep. Joshua Bryant, R-Rogers, and Senate Bill 739 by Sen. Kim Hammer, R-Benton, require employers that mandate vaccinations to provide an exemption process for workers, including requiring them to produce a negative antigen test once a week or proof of immunity including the presence of antibodies twice a year.

Hutchinson said the bills are designed to push back on President Joe Biden’s vaccine mandate for federal contractors and employers with more than 100 employees.

He said he is opposed to the federal mandate, but said the legislation is counterproductive and that the government should not interfere with the ability of businesses to protect their workers and customers.

“These bills are unnecessary and the debate on these bills have been harmful to our goal of increasing vaccination rates in Arkansas,” he said.

The governor said the federal mandate already allows a testing regimen for employees who do not want to take the vaccine or have a religious or medical exemption.

He reiterated that the vaccines are safe and have been evaluated. He added that the U.S. Food and Drug Administration has a vigorous approval process, which the vaccines passed.

“Arkansans need to get vaccinated, but not through mandates from the state level or from the federal level,” he said.

Hutchinson will discuss the coronavirus pandemic in Arkansas, as well as other "topics of the day," according to a news release by the governor's office.

[Video not showing up above? Click here to view » https://www.youtube.com/watch?v=xMysBu7B_SA]