Checkout offerings at library to include laptops, hot spots 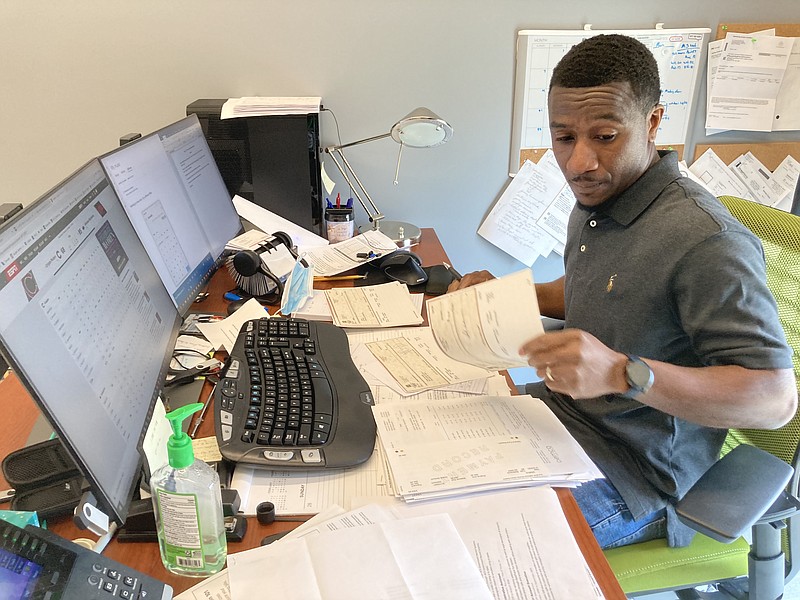 Going on a trip or working on a project that requires a computer and connectivity? The library can help with that.

Starting next week, the Pine Bluff-Jefferson County Library System will allow patrons to check out Wi-Fi hot spots. And starting next month, laptops will be available as well.

Library Director Ricky Williams informed the system's board of trustees Tuesday that the new devices will be available and that they are part of an effort to offer more services to those who have library cards in good standing.

"It's providing another service for the citizens," Williams said.

Williams said the library received a grant from the federal Electronic Connectivity Fund for almost $15,000, which will be split about equally to buy 20 laptops and pay for the data usage on 20 hot spots.

The hot spot devices will allow users to connect free to the internet wherever there is a signal. Williams said he chose T-Mobile's hot spot device because it has unlimited data usage. Up to 15 internet-dependent items, such as computers and tablets, can be connected to the hot spots at one time, according to information the library created that spells out the particulars of how the devices are to be used.

Twelve of the laptops are Dell-brand devices, and eight are Chromebooks, Williams said.

The devices will be available for seven days at a time and can be checked out for an additional week if no one has called to reserve them.

"I thought it was a win for the library," Williams said.

The board voted to put in place policy guidelines for using and checking out the laptops and hot spots, but because the devices are a new offering, changes may need to be made to the policy as more experience is had in how patrons use them and check them out and in.

"Let's roll it out, and we can adjust it later," said Tom Owens, president of the board.

Williams also told the board that more effort was being made to sign up new library cardholders. A recent promotion proved popular, Williams said, and close to 200 people have been signing up each month. He said he would like to see 600 more new cardholders by the end of the year.

During the public comment period, Mayor Shirley Washington thanked the board for agreeing with her counteroffer of $115,000 for repairs to the library's old location in the downstairs part of the Pine Bluff Civic Center. The two sides went back and forth in discussions about what the library should and shouldn't have to pay to make some of the repairs to the building, which the library called home for decades. At last month's meeting, the library board decided to agree to the mayor's offer on the condition that the library's payment would end all claims for repairs.