RESTAURANT TRANSITIONS: Chophouse not opening, up for lease; Camp Taco is open with big brew menu 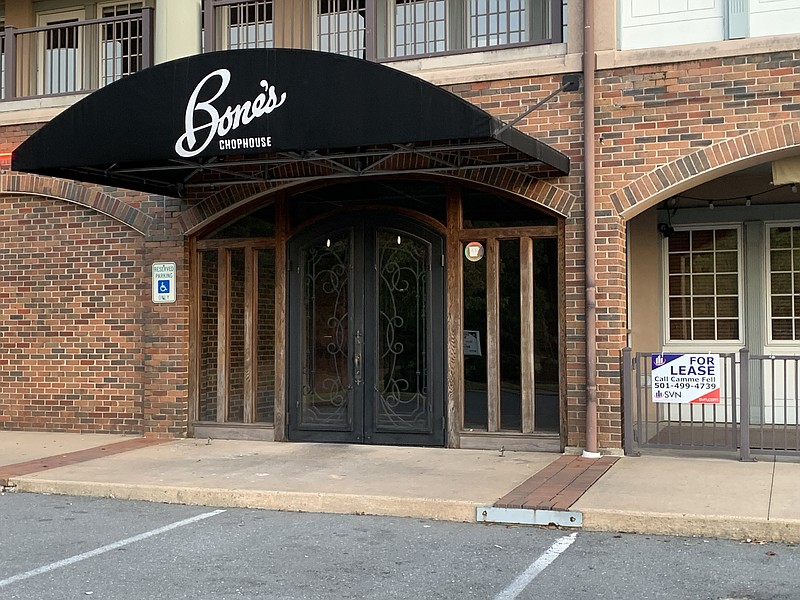 The temporary closure of the former Bone’s Chophouse at 27 Rahling Circle, Little Rock, appears to be permanent, as evidenced by the for-lease sign on the front fencing. (Arkansas Democrat-Gazette/Eric E. Harrison)

We reported that Bone's Chophouse was changing its name to JB ChopHouse at both locations, the original at 3920 Central Ave., Hot Springs, and the restaurant that moved into the former location of Arthur's, 27 Rahling Circle, Little Rock, after Arthur's moved into a former auto dealership on Chenal Parkway. And we reported that the Little Rock location, as of Sept. 3, was "temporarily closing [its] doors and going through a restructuring phase."

That temporary closure now appears to be permanent, as a for-lease sign has appeared on the fencing outside the restaurant's front door.

Camme Fell, leasing agent and sales adviser for SVN Ark Best Realty, confirms the restaurant has closed, and she is negotiating with a potential new tenant for the 65,000-square-foot space (two dining rooms, a bar, a wine cellar and a massive kitchen area); a lease has not yet been signed, so it's still advertised as available. Most, if not all, of the equipment remains, she says.

Camp Taco, the latest project from Yellow Rocket Concepts, 822 E. Sixth St. in Little Rock's East Village (previously Sixth Street Brewing Co. and before that, Rebel Kettle), opened for its first full day of operation Wednesday. In its first phase, hours are 11 a.m.-9 p.m. Tuesday-Thursday and Sunday, 11 a.m.-10 p.m. Friday-Saturday. Expect hours to expand soon; keep an eye on its social media portals for details. The website, camptaco.com, had not yet been updated by deadline but describes Camp Taco as "[a] new small-batch brewery project from the team at Lost Forty Brewing," and a Monday post on the Facebook page (facebook.com/camptacobeer) goes into additional detail about the available opening brews: "Our brewers have some brand new recipes and passion projects fermenting away ... We're excited to share some classic styles with you — Hefeweizen, Kolsch, Munich-Style Dunkel, Munich Helles and Belgian Tripel." We're still waiting on a telephone number.

The voicemail message at the restaurant phone number — (501) 490-1332 — says it's open, and though the lights are on at the Waffle House at 3202 Bankhead Drive, Little Rock, near the Bill & Hillary Clinton National Airport, which has been temporarily closed for several months, it is still not serving customers. Signs in the windows announce "We're hiring cooks & servers," and lists the advantages and benefits available.

Demolition has begun on the former McDonald's, West Seventh Street and Broadway, Little Rock, with fencing up around it and the nearby strip of storefronts that formerly housed, among other businesses, Ciao. They're coming down to make way for a Chick-fil-A.

Megan's Diner, 1105 Albert Pike, Hot Springs, has apparently closed and its phone number, (501) 609-9979, has been disconnected. One of our eagle-eyed readers reports a sign announces the pending opening there of Quetzal Authentic Mexican Cuisine, which the folks there say is moving in the next couple of months from its current location, 1018 Airport Road, Hot Springs. The current phone number is (501) 881-4049.

And the James Beard Foundation is seeking entries for the 2022 James Beard Awards, recognizing "exceptional talent and achievement in the culinary arts, hospitality, media, and broader food system," according to a news release.

The foundation is in the midst of establishing an extensive overhaul of policies and procedures, "ensuring a more transparent, accessible, and equitable process for future James Beard Awards," the release explains. The changes are designed "to address systemic bias, increase the diversity of the voting body, and make the Awards more accessible to more communities."

Deadline to submit entries (media awards) and recommendations (restaurant/chef and leadership awards) is 10:59 p.m. (CST) Nov. 30. Entry fees have been reduced. Information and the full list of 2022 awards programs, criteria and deadlines are at jamesbeard.org/awards. Restaurant and chef semifinalists will be announced Feb. 23. Arkansas has had two winners in the America's Classics category: Jones' Bar-B-Q in Mariana in 2012 and Little Rock's Lassis Inn in 2020.

And speaking of Jones' Bar-B-Q in Marianna, it's on The New York Times' 2021 Restaurant List of "the 50 places in America we're most excited about right now." The project "dispatched critics, reporters and editors around the country to find the 50 most vibrant and delicious restaurants in 2021." Most of them are on the East and West coasts, or in larger cities in the heartland — Chicago, St. Louis, Denver, Minneapolis — but a few are from tinier towns (and Marianna may not be the smallest); the list also includes Kindred in Davidson, N.C., and Roots Southern Table in Farmers Branch, Texas. See the complete list at nytimes.com/interactive/2021/dining/favorite-restaurant-list-america.html.