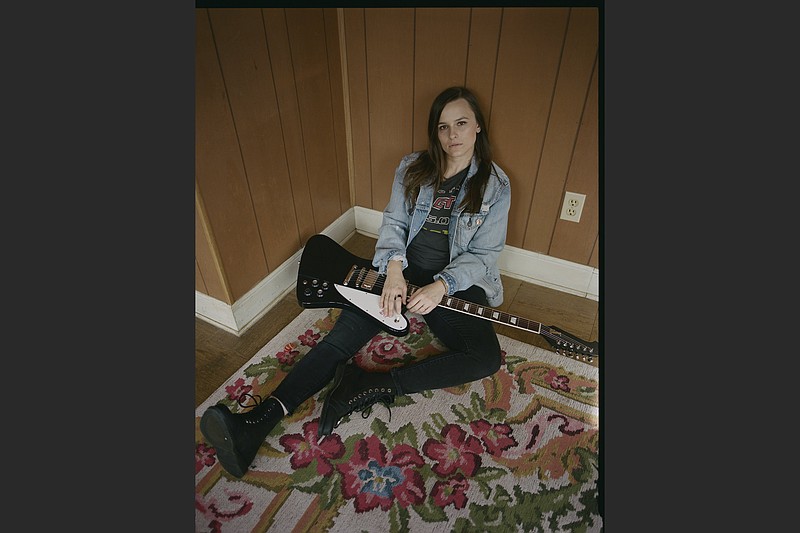 Emily Wolfe’s new album, “Outlier,” was released in June. She and her band will perform Friday at Stickyz Rock ’n’ Roll Chicken Shack in Little Rock. (Special to the Democrat-Gazette/Beth Garrabrant)

On Friday, she and her band — bassist Evan Nicholson and drummer Clellan Hyatt — return to the venue for her first gig outside of Texas since the pandemic.

"I'm ready to go," the 31-year-old says from Austin, where she lives. "I have our tour van in my driveway and I just go out and stare at it because I want to be gone, I want to be on the road, going to the next venue. It's just so much fun touring with my bass player and drummer. We're like best friends and we're always laughing."

Down time from touring wasn't a total loss. Wolfe worked with producer Michael Shuman of Queens of the Stone Age on what would become "Outlier," the follow-up to her 2019 eponymous debut.

"Outlier," which dropped in June, was recorded in Shuman's studio in Los Angeles. It has a little bit of synth-pop texture to go with Wolfe's guitar shredding. It's evidence of Wolfe's growth as a musician and songwriter and a departure from her first record.

"The 2019 album was produced by Ben Tanner from Alabama Shakes," she says. "At the time, it was kind of a blues rock, raw approach. With this one I wanted to do something a little different and see what would come out of a more L.A. sound."

She also stretched out lyrically, especially on the banging opening track "No Man" — "I don't need no man to tell me how to work my machine," she sings. "LA/NY," has a pop sheen, a grimy guitar solo and Wolfe, who can't be in L.A. or New York, waiting patiently for a lover to come back home. "My Lungs Give Out" is a banger about chasing love and features another wickedly fuzzed-up guitar solo.

"On the last record, I didn't go that extra mile," she says of her lyrics. "I kind of just put songs together and let them roll out with what sounded good phonetically to me. With this record, I was encouraged to give that extra 10% and make sure every line fed into the next so you could look at a song from this record and read it without the music and it would tell a story."

Wolfe was about to head to the studio where she had been working on a couple of covers that she will release soon. We can't reveal the titles, but they are inspired choices.

"The record has been out since June and I haven't really been able to tour on it, so putting out two covers would be cool to release before the tour," she says.

Guests are expected to follow any covid-19 policy Stickyz has in place on the day of show regarding masks and/or social distancing or risk being asked to leave the venue.