Freedom on a leash: Dog uses her eyes for University of Arkansas student 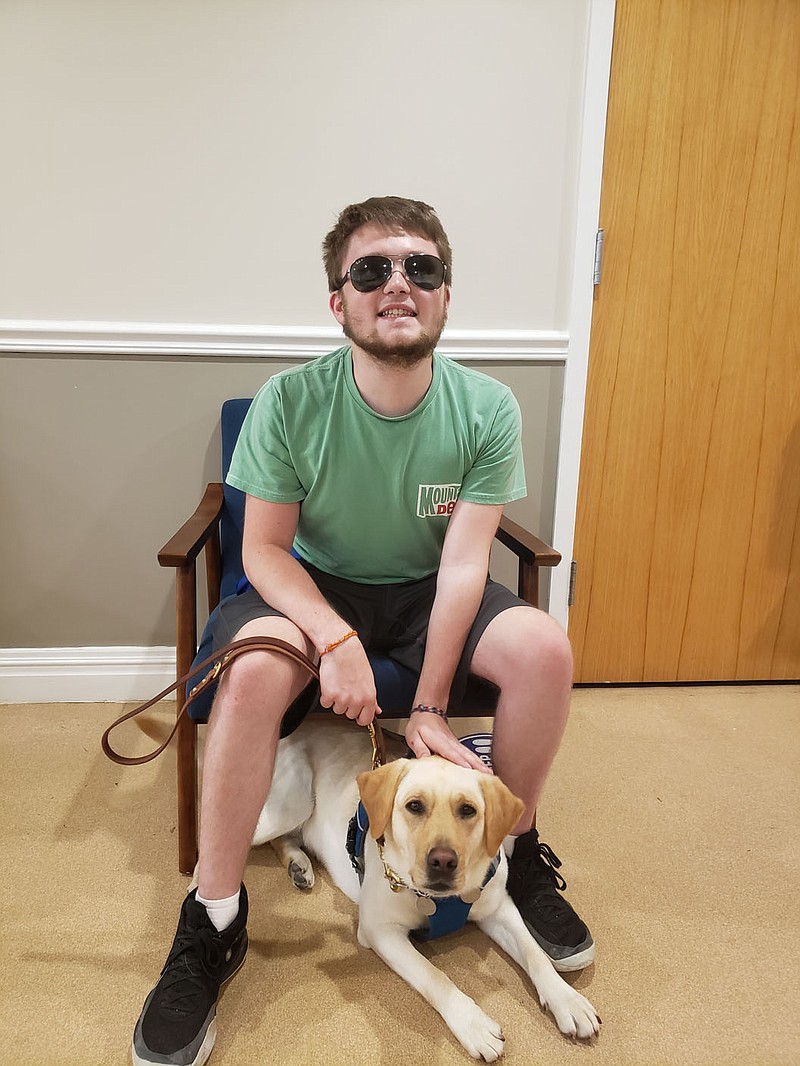 “The guide dog is more than just a working dog,” says Miranda Beckmann of Guiding Eyes for the Blind. “They can add so much companionship to the lives of individuals with vision loss and make navigating a challenging world a team effort.” (Courtesy photo)

College, says University of Arkansas sophomore Cole Phillips, 19, is all about three things -- sleep, good grades and social life. And that, he adds, laughing, is why he doesn't sleep as much as he should.

Phillips is an ordinary student, he says. He likes to hang out with people, loves writing lyrics, loves music in general, is a huge player of cards, board games and chess and describes himself as "very, very social." When interviewed not long after the UA-Texas football game, he was still a little bit hoarse -- and still a lot excited.

Phillips' best friend didn't go to the game with him; the atmosphere at Donald W. Reynolds Razorback Stadium is a little bit too much for even a sweet, easy-going dog like Nutmeg. And Phillips says he worries she might get hit by some kind of flying debris or kicked accidentally and he wouldn't know. Nutmeg can see; Phillips cannot. Her job is to get him around the UA campus for his classes in economics, and he says she does it beautifully. He leaves it to his friends to call the Hogs with him.

"I could not imagine doing what I'm doing now with a cane," says Phillips, who graduated from Bentonville West High School in May 2020. "Last year, everything was online, so I never actually had to go to classes. Now I have her for my first year going to classes. I can't imagine doing all the things I do as quickly and an efficiently as I do without her.

"I like to get up and go, and I feel like being with a guide dog is so much more freeing."

Phillips was born with glaucoma and had some vision until 2015. Memory is a double-edged sword, he says: He has points of reference for many things he wouldn't have if he'd never been able to see. He says he also knows what he lost.

"But I am blessed by all the good things I do have," he adds quickly.

Phillips says a cane worked fine as a mobility aid in high school -- augmented by help from his friends. Not proficient in Braille, he says he did his schoolwork electronically or verbally. It was a friend getting her own guide dog that piqued his interest in 2019. He contacted Guiding Eyes for the Blind, a nonprofit based in Yorktown Heights, N.Y., and began the application process. Everything Guiding Eyes does is at no cost to the recipient, and over the years, the organization has matched some 10,000 dog-and-owner teams.

A field representative came to Bentonville as the first step after Phillips was accepted into the program.

"We look at several factors when pairing one of our applicants with a guide dog," says Miranda Beckmann, a guide dog mobility instructor with Guiding Eyes. "Control level, pace and pull, as well as environment, are the top three factors we look at for each match. Guide dogs, although they are very well trained, are still dogs, and they do occasionally make mistakes or get distracted. Each dog will have something that gets their attention and may be a potential distraction when working. We need to make sure the person with whom we are matching the dog can control the dog in the presence of distraction.

"Each person has a pace that they are most comfortable walking at, so the second thing we look at is: can we match the person with a dog who walks in the pace range the handler desires? Along with pace comes pull in the harness, how much pull does the handler need to be able to follow the dog around obstacles or as the dog slows for curbs and changes in elevation?

"Lastly, we look at the environment that the handler will be living or traveling in," Beckmann says. "Some people live and work in urban areas where there is access to public transportation, while other people live in very rural areas, and many folks are somewhere in between. The type of dog that will be successful long term in New York City may not thrive in rural country travel environments, and the dog who enjoys country walks may be overwhelmed in a heavy city environment day in and day out. Most of the dogs can work well in many environments, but we need to make sure they will do well in the environments that the handler will be living/working in most.

"If we have met the above criteria, then we are able to consider personal preferences like color, breed or gender of the dog."

Like many guide dogs, Nutmeg is a Labrador retriever. German shepherds are a traditional breed used to assist humans, and Guiding Eyes breeds both at its Canine Development Center in Patterson, N.Y.

"This allows us to selectively breed for health, temperament and work ability," Beckmann says. And "both breeds enjoy the relationship with our handlers and working in general."

Once a potential match had been made, Phillips flew to New York for a 10-day training session -- which he says is more about training the handler than the dog.

"The residential program is aimed at giving the students a good foundation for working with their new guide dogs," says Beckmann. "We really work to facilitate good communication between the handler and dog. The dogs are trained with specific cues and hand signals which we need to teach the handler, and we need to make sure the handler can correctly interpret the information the dog conveys through the harness. We often act as interpreters between the dogs and the handlers as the students are building the needed skill set for working with a guide dog."

Beckmann says a new team will also work together in environments similar to those they'll navigate at home.

"So, if one student works predominantly in rural country routes with no sidewalks, we will try to focus on that type of travel," she explains. "If another student works mostly in average city areas, we will work with that client in an average-sized city. No matter what the environment, we teach each student how to care for the dogs, i.e., feeding, grooming, medicating and picking up after the dog. We also cover how the dog will respond when faced with traffic coming close to the teams."

Phillips says most people are impressed by Nutmeg's skill at what he calls "targeting."

"We walk out of my door to the steps, and she stops right in front of them. She stops at changes of elevation, whether I tell her 'target' or not. We walk my route, and when we cross the street to the curb, she puts her front paws up on it so I can know where it is. Once I get to my classroom, she targets an open chair. It's fantastic."

Phillips assures that Nutmeg gets plenty of praise and treats and playtime. But when she is in harness, she is in what he calls her "work uniform," and that means only he should communicate with her.

"Many of our graduates tell us that when they used their white cane for mobility, people were less likely to approach them and make conversation, but once they started traveling with the use of a guide dog, the dog was an icebreaker," Beckmann says. But, she cautions, "if your readers encounter a guide dog team, it is always best to address the handler, not the dog. When the guide dog is in harness, it needs to be on its best behavior even if the handler is not actively walking with the dog, so try not to call the dog's attention by reaching for the dog, making noises at the dog or prolonged eye contact with the dog."

"People always want to know if they can pet her, and I tell them while the harness is on, pretend she has an invisibility cloak," Phillips adds. "She's working. And interrupting that can be problematic and dangerous.

"If we have time, I'm happy to take her harness off and let her be a dog. Trust me, she knows how cute she is!"

"The guide dog is more than just a working dog," Beckmann adds. "They can add so much companionship to the lives of individuals with vision loss and make navigating a challenging world a team effort." 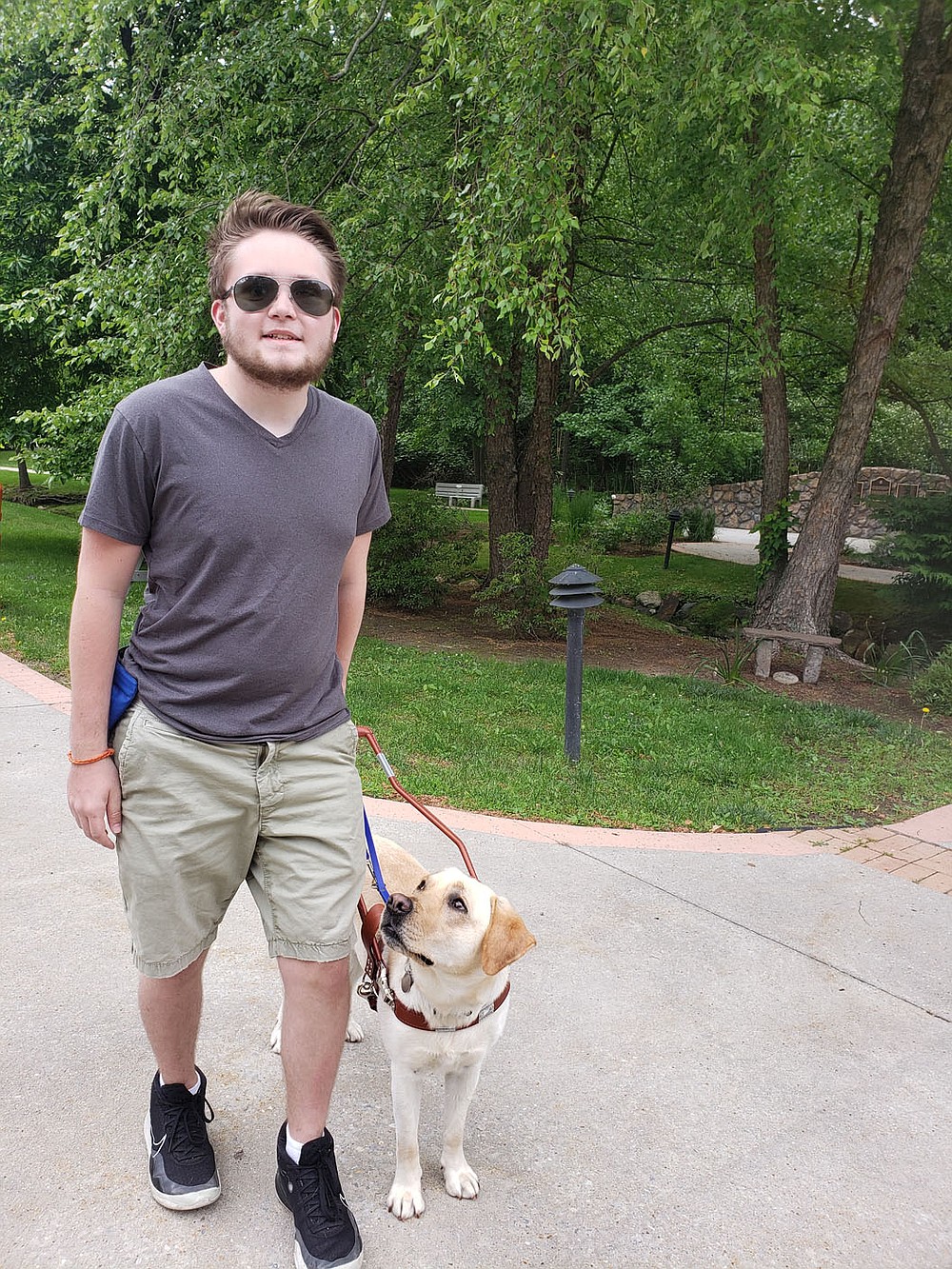 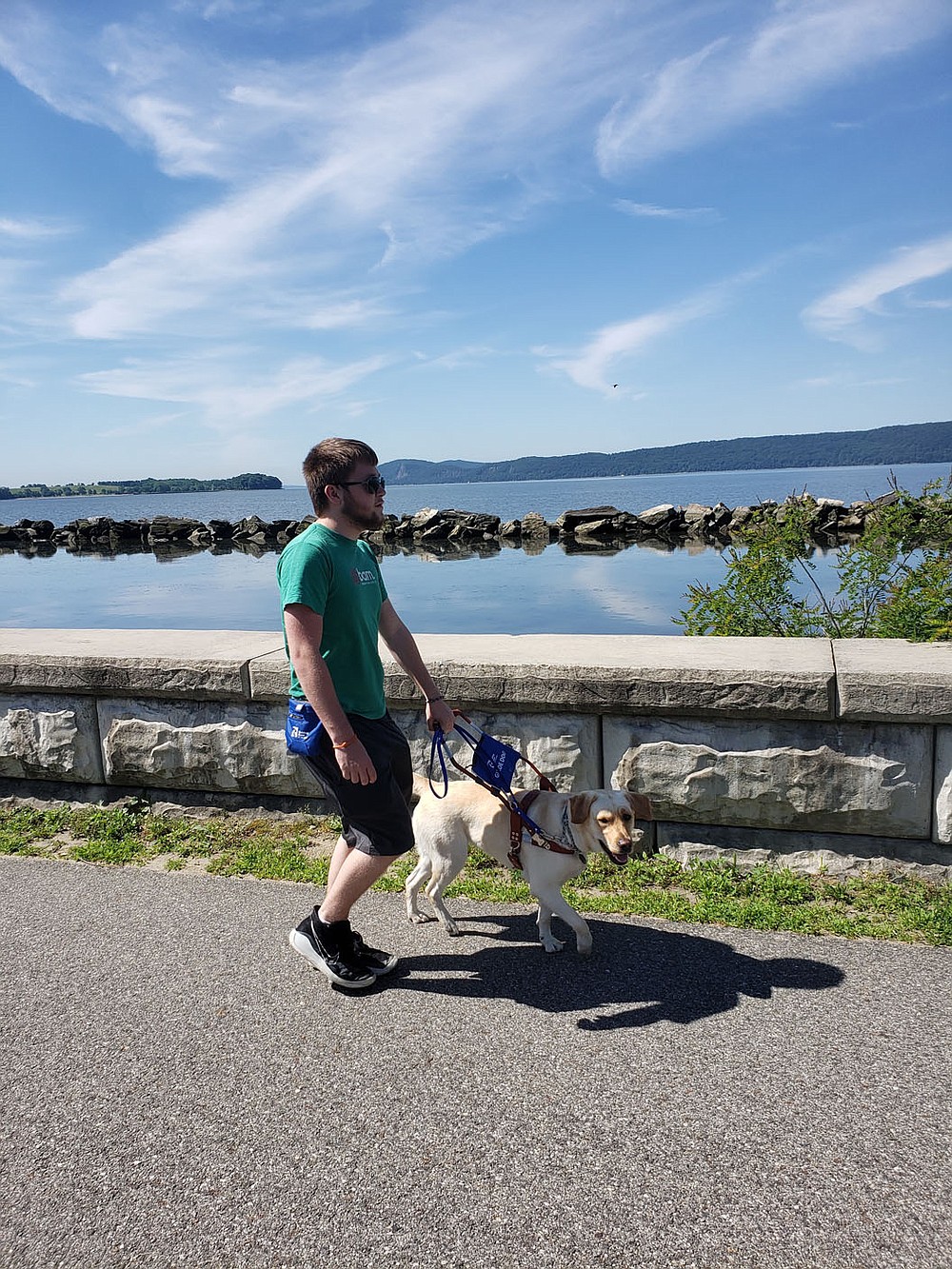 Phillips asks that people ignore Nutmeg while she’s working because distracting her can be dangerous for both of them. “And don’t try to sneak around and pet her!” Once she’s out of her harness, he adds, she can be a normal dog — and “she knows how cute she is!” (Courtesy photo) 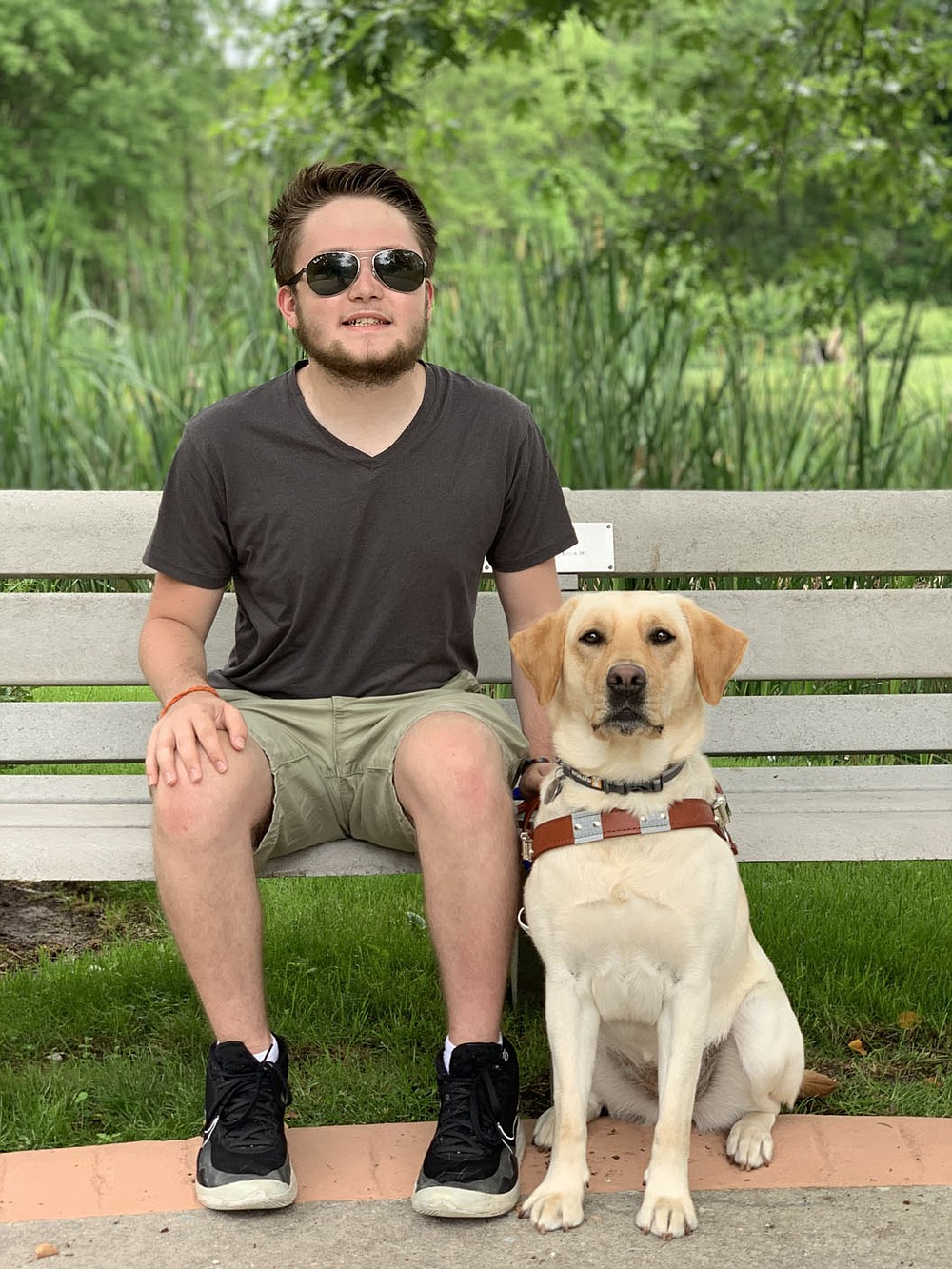 Guide dogs are typically in service for about seven years, says Cole Phillips, the human half of a team with a Labrador retriever named Nutmeg. Whether he’ll continue with another guide dog depends on his career, he says. He’s studying economics at the University of Arkansas in Fayetteville. (Courtesy photo)
More News

Guiding Eyes for the Blind

Guiding Eyes is a nonprofit organization that is funded by donations, says Miranda Beckmann, a guide dog mobility instructor. “If your readers would like to help support Guiding Eyes for the Blind, they can visit our website, www.guidingeyes.org, to make a donation or check out our available volunteer opportunities.”

Print Headline: Freedom on a leash