Gruden's attitudes a burden for NFL 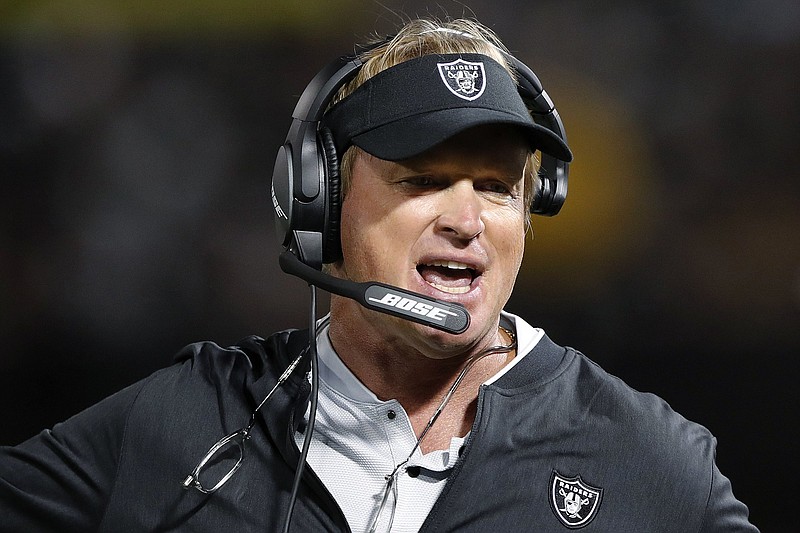 In this Aug. 10, 2018, file photo, Oakland Raiders coach Jon Gruden reacts during the first half of an NFL preseason football game against the Detroit Lions in Oakland, Calif. (AP Photo/John Hefti, File)

When Shad Khan set out more than a decade ago to become the first member of an ethnic minority to own an NFL team, the Pakistani-American heard the scuttlebutt.

"The conjecture was, 'You will never get approved, because you're not white,' " Khan, now the owner of the Jacksonville Jaguars, told The Associated Press in a telephone interview this week.

His attempt to purchase a 60% stake in one club fell through, so "the narrative that people had been giving to me kind of got reinforced," Khan said.

Undaunted -- and, he says, encouraged by Commissioner Roger Goodell -- Khan moved on and soon reached an agreement to buy the Jaguars. "Got approved unanimously," Khan noted. "The conjecture and what was going on -- and the reality -- turned out to be different."

Current and former players and others around the league have varying opinions about a key question that arose in light of the racist, homophobic and misogynistic thoughts expressed by Jon Gruden in emails he wrote from 2011-18, when he was an ESPN analyst between coaching jobs, to then-Washington club executive Bruce Allen: Just how pervasive are those sorts of attitudes around the sport these days?

It's certainly been a topic of conversation in locker rooms.

"I'm not surprised those ideas exist. ... I guess I was a little bit surprised by that comfort level, sending an email like that to somebody. I would assume you're pretty assured that they're not going to be offended by it or surprised by it or have them say anything to you about the nature of those emails," said Corey Peters, an Arizona Cardinals defensive lineman in his 11th year in the NFL. "But I think it's good for the league to have that come out, and guys be held accountable for the things that they say, even in private."

Gruden resigned as coach of the Las Vegas Raiders on Monday night following reports in The Wall Street Journal and The New York Times about messages he wrote demeaning Goodell, union chief DeMaurice Smith and others, using offensive terms to refer to Blacks, gays and women.

Some saw Gruden's words as indicative of a behind-the-scenes culture that could persist in an industry where about 70% of the players are Black while more than 80% of head coaches (27 of 32) and general managers (also 27 of 32) are white -- and all are men.

Among principal owners, only Khan and Buffalo's Kim Pegula are members of minorities.

"The bigger issues aren't unique to the NFL, but I think they are stark in the NFL: Who's in positions of power? And who's making decisions? When that is only one group, particularly people who are privileged, who are from the dominant group, then those are going to likely be skewed decisions and skewed world views," said Diane Goodman, an equity consultant.

"It's easy to point to Gruden and go, 'Oh, isn't he terrible?' and 'Look at the terrible things he did.' But that doesn't look at that larger culture, where people were participating with him. People were allowing these emails to exist. It really is about the whole culture and that sense, that I'm sure people have cultivated, to feel like, 'I can say these things and they will be, at best, appreciated and reciprocated or, at worst, people may not appreciate them but nothing's going to happen.' And that is about privilege and entitlement," Goodman said. "There is the assumption that 'I can say these things to another white man who is going to think they're OK.' "

Some, such as Seahawks six-time All-Pro linebacker Bobby Wagner or Hall of Fame safety Brian Dawkins, found the whole episode more reflective of the country than the NFL.

"I hate to say it like this, but that's just the world we live in. That's America," said Dawkins, whose first two seasons in Philadelphia coincided with Gruden's last two as the Eagles' offensive coordinator. "I believe if (the emails were known about) in 2011, then maybe the backlash is not as severe as it is now. I think where we are in the climate that we're in, the things that we've gone through in the last, maybe, three years with social injustice and all those things, a lot of people are waking up to some of the things that have been normal for too long."

Said Wagner: "There are people out there like that, that speak that way, that have that mindset, that have not grown. It's not just football, it's not just NFL ownership or coaches or anything like that."

He also thinks his job's workplace culture is improving.

"Progress has been made. Whether it's good enough or not good enough, I won't go into details about that," said Simmons, who entered the NFL in 2016. "I'm a firm believer that as long as we're taking steps in the right direction, that has to be positive, right?"

Former defensive end Mike Flores figures the sentiments found in the emails, which were gathered during an investigation into sexual harassment and other workplace misconduct at the Washington Football Team, do not represent merely one man's mindset.

"I know how people talk and joke around in locker rooms. Most people in the NFL would be highly scrutinized if the 'politically correct police' examined everyone's emails," Flores -- who played college football at Louisville with Gruden's brother, Jay, before spending five seasons with the Eagles, 49ers and Washington -- said in a phone interview.

Hugh Douglas, a defensive end with the Jets, Eagles and Jaguars from 1995-2004, told the AP that Black athletes are "conditioned" to hearing "the racial stuff" and hypothesized that owners wouldn't want their emails made public.

But Pat Hanlon, senior VP of communications for the New York Giants, tweeted, "Been in league 35 yrs. Have never heard that language in writing or verbally. I'm not naive. Sure it has been there." He wrote "it is not commonplace" in a second tweet.

Reigning NFL MVP Aaron Rodgers sees a generational gap between the folks in charge and those taking the field.

"I can say with real honesty and pride that I don't feel like those are opinions that are shared by players. I feel like, in the locker room, it's a close-knit group of guys. And we don't treat people differently based on the way that they talk, where they're from, what they're into, what they look like," the Packers quarterback said on The Pat McAfee Show.

"I know that there's probably opinions similar to (Gruden's), but I feel like they're few and far between. I really do," Rodgers said. "I feel like the player and the coach of today is a more empathetic, advanced, progressive, loving, connected type of person. ... Hopefully we can all, as a league, learn and grow from this and hopefully it puts people on notice who have some of those same opinions, like, 'Hey, man, it's time to grow and evolve and change and connect.' "

Miami Dolphins Coach Brian Flores, who is Black, was among those echoing that sentiment.

"From my standpoint, what I love about the game is that it brings people together. It really brings people from all walks of life together," Flores said. "So you hate to see anything that brings any type of division."

Speaking about what happened with Gruden, in particular, Jacksonville's Khan said, "Obviously, these emails are disturbing," and quickly added: "My personal experience has not been that way." 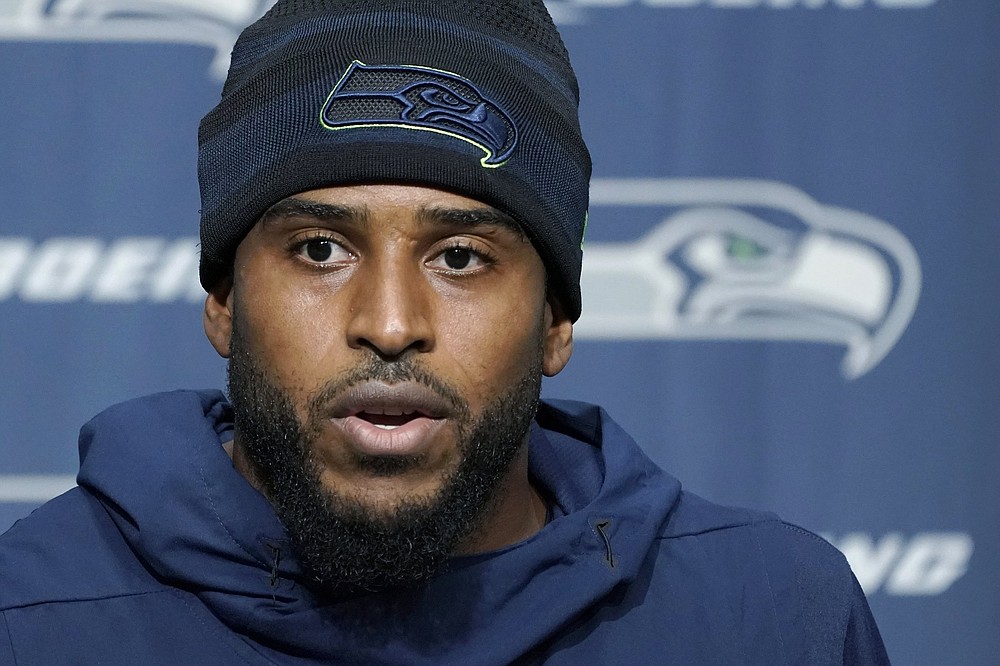 Six-time All-Pro linebacker Bobby Wagner of the Seattle Seahawks said the whole episode with former Raiders Coach Jon Gruden is more reflective of the country than the NFL. “There are people out there like that, that speak that way, that have that mindset, that have not grown,” Wagner said. (AP/Ted S. Warren) 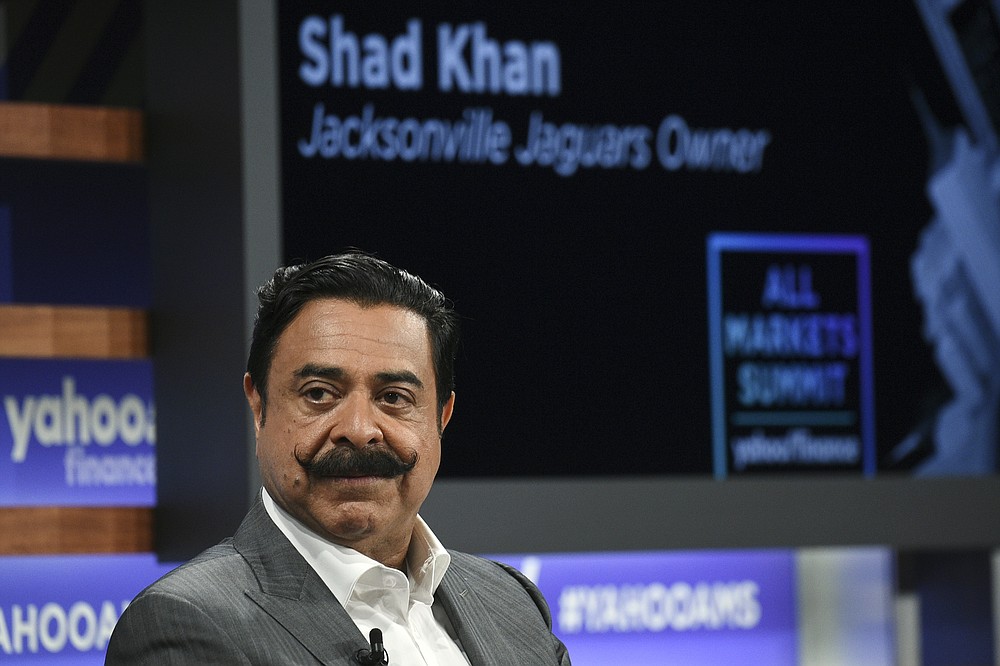 FILE - In this Oct. 10, 2019, file photo, Jacksonville Jaguars owner Shad Khan participates in the Yahoo Finance All Markets Summit at Union West in New York. Current or former players, along with people in positions of leadership with NFL clubs, have offered differing opinions this week on how pervasive the sorts of racist, homophobic and misogynistic thoughts expressed by Jon Gruden -- in emails he wrote from 2011-18, when he was an ESPN analyst between coaching jobs, to then-Washington club executive Bruce Allen &#x2013; remain around the sport to this day. (Photo by Evan Agostini/Invision/AP, File) 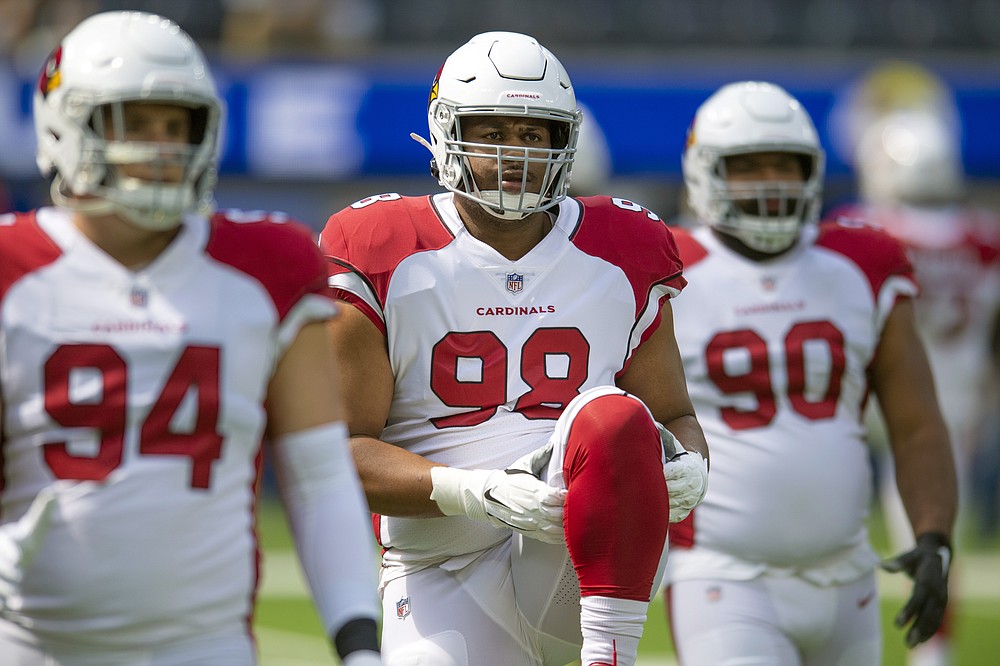 FILE - In this Sunday, Oct. 3, 2021, file photo, Arizona Cardinals defensive tackle Corey Peters (98) stretches before an NFL football game against the Los Angeles Rams in Los Angeles. Current or former players, along with people in positions of leadership with NFL clubs, have offered differing opinions this week on how pervasive the sorts of racist, homophobic and misogynistic thoughts expressed by Jon Gruden -- in emails he wrote from 2011-18, when he was an ESPN analyst between coaching jobs, to then-Washington club executive Bruce Allen &#x2013; remain around the sport to this day. (AP Photo/John McCoy, File)