Halfway through: Hogs' resurgence has come with pressure 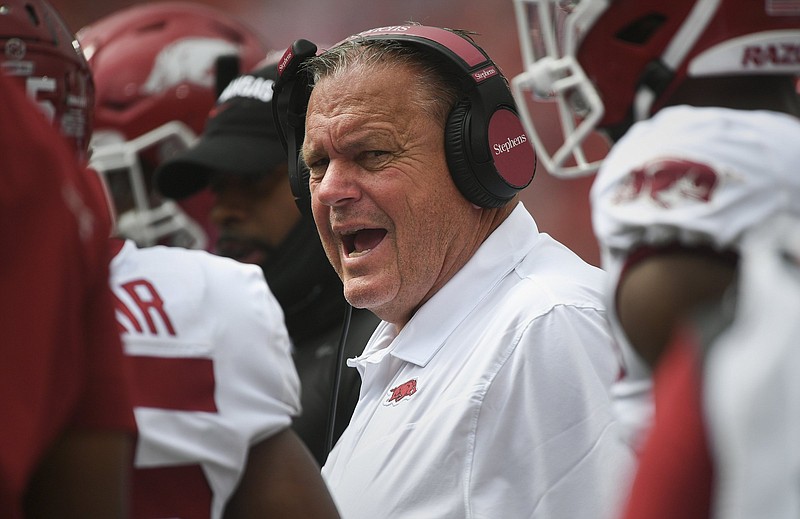 Arkansas Coach Sam Pittman opened his second season at the helm of the Razorbacks with a four-game winning streak. Entering Saturday’s game against Auburn, the No. 17 Hogs have lost two in a row, but it is still a start to the season that few, if any, predicted. (NWA Democrat-Gazette/Charlie Kaijo)

FAYETTEVILLE -- Halfway through the season the University of Arkansas is sitting at 4-2 -- a record many analysts thought improbable -- with only a failed two-point conversion at Ole Miss last week separating the Razorbacks from a 5-1 record and a likely return to the top 10.

The strength of the Razorbacks' impressive wins over then-No. 15 Texas and then-No. 7 Texas A&M, which went on to upset No. 1 Alabama last week, has earned nationwide respect for Coach Sam Pittman and the team.

At No. 17 in The Associated Press top 25, Arkansas is the highest-ranked two-loss team heading into Saturday's SEC West showdown against Auburn, also 4-2, which has been solid under first-year Coach Bryan Harsin.

As impressive as their resurgence has been in 16 games under Pittman, they are currently a 4 1/2-point favorite on Saturday for the first time in 36 SEC games. The senior-laden roster has shown it can get up for big games, and that is certainly the case against the Tigers.

"But there's a lot of pressure. Once you start out like we did, the fan base, everybody starts getting excited about, you know, you can go beat the Green Bay Packers. So with that comes a lot of responsibility."

Georgia slammed the Razorbacks 37-0 two weeks ago before ascending to No. 1.

Otherwise, Arkansas had won all its games by at least 10 points before dropping the shootout at Ole Miss. Pittman opted to go for a two-point conversion after KJ Jefferson's 9-yard touchdown pass to Warren Thompson on the final play of regulation brought the Razorbacks within 52-51.

Had Arkansas converted that chance, it would be tied with Alabama atop the SEC West at 2-1. Instead, the thinnest margin of defeat has the Hogs in a three-way tie for fifth with LSU and Texas A&M.

Pittman said he prefers the pressure of fans expecting to win games.

"Being 4-2 I think is certainly not where we want to be, but we can't sit here and go, 'Well that's been a terrible season to this point,'" Pitman said. "Certainly wish we would've been able to convert the two-point play or stop them or make a field goal or not get a turnover, whatever it may be, and be 5-1.

Here are some mid-term grades for the Razorbacks:

KJ Jefferson's dual-threat capability has never been better on display than in last Saturday's loss at Ole Miss, when he accounted for 3 rushing and 3 passing touchdowns and 411 yards.

Jefferson's rise in maturity, leadership and production would indicate the kind of arc of progression that would have him in Heisman Trophy discussions next season. The sophomore has thrown for 1,235 yards and 9 touchdowns, with 62.7% completions and 3 interceptions, and rushed for 320 yards and 5 touchdowns with an average of 5.3 yards per carry.

As he continues to learn and grow, his footwork, sometimes leading to passes that sail on him such as the two-point conversion throw at Ole Miss, must improve.

Malik Hornsby is faster than Jefferson but clearly needs more seasoning. His work in three series against Texas A&M, though at times shaky, cannot be overlooked.

This is perhaps the most upgraded position on the team behind veteran Trelon Smith, who has rushed for a team-high 387 yards and 4 touchdowns despite being nicked up through the first six games.

The backs have been dangerous in the passing game and have only one lost fumble, when Sanders was stopped, stood up and had it ripped away last week.

Junior Treylon Burks has taken off after his slow start and continues to make highlight-reel type catches on a weekly basis. His oversized hands come in handy for high-pointing, 50-50 balls and sideline receptions.

Tyson Morris' super senior season has been rewarding and productive. Warren Thompson's presence was huge in recent weeks and Trey Knox might have found his ticket to better production at tight end. De'Vion Warren hasn't returned to his 2020 form after knee surgery.

The tight end group has blocked fairly well, but Blake Kern has dropped passes. Perhaps newcomers Ketron Jackson Jr. and Jaquayln Crawford can boost their production in the second half. Downfield blocking has been OK, though with some critical holding penalties.

Multiple players have battled through injuries. Left tackle Myron Cunningham and center Ricky Stromberg have had the best starts. Dalton Wagner's finger injury has given ultra-versatile Ty Clary yet another role, and he delivered last week at Ole Miss.

Guards Brady Latham and Beaux Limmer have done OK, but a down effort at Georgia led to the position push by bigger Jalen St. John and Ty'Kieast Crawford. So far, Latham and Limmer are holding on to those jobs. Luke Jones could factor in at guard or tackle.

The sacks have dried up after a decent start and certainly after Tre Williams' ravaged Texas A&M's left tackles. Run-game enforcement and strong gap control has also been lacking the last two weeks.

This unit must have improved production the rest of the season for the defense to rediscover its early statistical strengths.

After a choppy start due to targeting penalties against stalwarts Grant Morgan, Hayden Henry and Bumper Pool, the unit had settled in well until the last couple of weeks. The trio shined in the 40-21 win over Texas with exceptional physical play and well-orchestrated run blitzing, and the same held true for the Texas A&M game.

However, Georgia and Ole Miss did some scheming that made it tougher on the linebackers and unleashed damaging run games. Missed tackling has also been on the rise as the grind of the season sets in.

This looked to be a strength in numbers group at the outset, but the depth hasn't come fully into play. A hand injury has clearly kept star safety Jalen Catalon from the kind of physicality he put on display every week last year, and he's taken a few bad angles on home-run plays.

The cornerbacks have been run past in a few games now, but only Ole Miss fully exploited the deep ball.

Two blocked punts -- both deep in Arkansas territory and leading to scores -- and not much of a return game are the biggest negatives so far.

The coverage units have done well. On the rosier side, kickoff man Vito Calvaruso's contributions with 82% touchbacks cannot be underestimated. Freshman Cam Little was off to a hot start at 8 for 8 on field goals until missing 2 of his last 3, a 37-yarder at Georgia that led to a shutout and a 50-yarder at Ole Miss that could have been critical. Reid Bauer's punting has been mostly OK aside from the blocks. Nathan Parodi has added some stability as the returner after a couple of muffs.

The Razorbacks are clearly improved from last year but still a little shaky.

First things first. Sam Pittman's decision to go for a two-point conversion with no time on the clock last week is certainly subject to second-guessing, but analytics and "feel for the game" both shouted, "Do it."

The defensive game planning by Barry Odom and staff in the first month was practically spotless. It feels like the run-game bludgeoning Arkansas has suffered the last two weeks are part great scheming versus the 3-man front and the lighter box, part excellent opposition personnel and part dinged-up Razorbacks. The secondary had a bad game at Ole Miss. No other way to put it.

Offensively, Kendal Briles has done a superb job of adding more to KJ Jefferson's plate and tailoring the schemes to fit him. Malik Hornsby kept things together, on a tightrope, to salvage the upset of Texas A&M and that has great value. The offensive line has been solid and clearly improved, and running back production has been phenomenal. Having more contributors at wide receiver to keep Treylon Burks from constant doubling is very important. It's clear Briles has some mis-direction runs and gadget plays with receivers in the bag, but they've been underwhelming so far.

AUBURN AT NO. 17 ARKANSAS 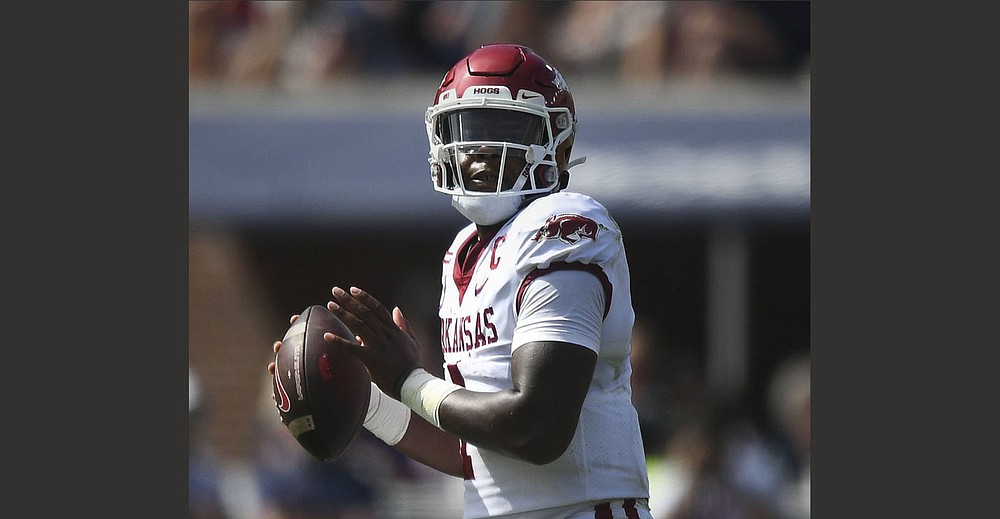 Print Headline: Halfway through: Hogs' resurgence has come with pressure