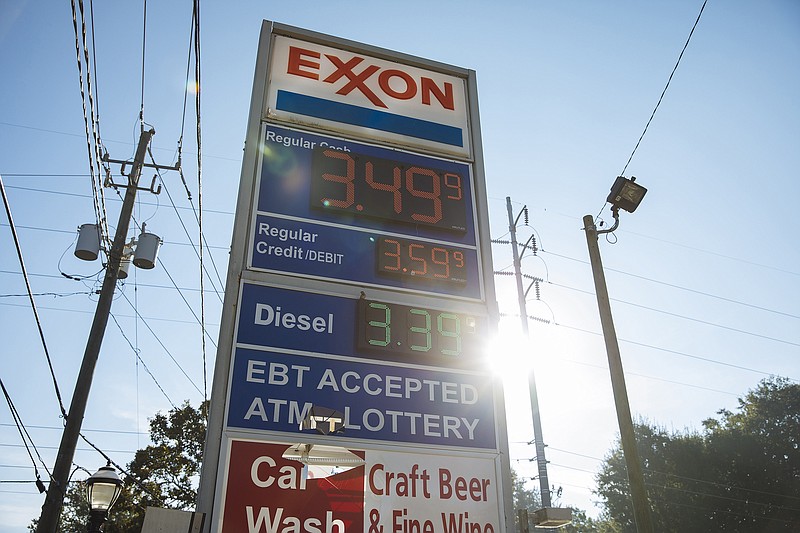 Prices for regular gasoline were well over $3 Wednesday at this Exxon in Atlanta. Gas prices are up more than 42% compared with a year ago. (The New York Times/Kendrick Brinson)

WASHINGTON -- Another surge in consumer prices in September pushed inflation up 5.4% from where it was a year before, matching the largest increase since 2008 as tangled global supply lines continue to create havoc.

U.S. consumer prices rose 0.4% in September from August as the costs of new cars, food, gasoline, natural gas and restaurant meals all jumped.

The annual increase in the consumer price index matched readings in June and July as the highest in 13 years, the Labor Department said Wednesday. Excluding the volatile food and energy categories, core inflation rose 0.2% in September and 4% compared with a year ago. Core prices hit a three-decade high of 4.5% in June.

The September gains came as food -- especially meat and eggs -- cost consumers more. Housing prices also accelerated, something that raised alarm bells among many economists. Shelter is an important part of overall inflation, and upward pressure in that index tends to last for some time.

In recognition of how persistent the price increases are proving to be, the Social Security Administration said Wednesday that benefits will increase 5.9% in 2022, the biggest boost in 40 years. The increase, known as a cost of living adjustment, is tied to rising inflation.

Inflation this year has stumped Washington officials, with some Republicans blaming a burst of government spending for pushing prices higher, while the White House and Fed leaders argue that the pandemic's economic disruptions are the chief culprit.

[Video not showing up above? Click here to watch » https://www.youtube.com/watch?v=FpozAVYJX8A]

There was a sharp contraction in the economy last year because of the pandemic, but it was followed by a big burst in spending caused by a crush of government support and consumers looking to spend. When demand for certain products surged, it led prices to rise while also causing a shortfall in many of the items that people wanted to buy. The pandemic also ensnarled supply chains, especially those dependent on semiconductor chips, as factories shutdown around the world and haven't caught up.

The ongoing price gains raise pressure on the Federal Reserve, whose officials have repeatedly said the increases will be transitory, and on President Joe Biden, who is facing an economy of slowing job gains and higher inflation. Biden has been accused by Republicans of spurring inflation with his $1.9 trillion rescue package enacted in March of this year.

The unexpected burst of inflation this year reflects sharply higher prices for food and energy, but also for furniture, cars, televisions and other largely imported goods. Covid-19 has shut down factories in Asia and slowed U.S. port operations, leaving container ships anchored at sea, and consumers and businesses paying more for goods that may not arrive for months.

"Price increases stemming from ongoing supply chain bottlenecks amid strong demand will keep the rate of inflation elevated, as supply [and] demand imbalances are only gradually resolved," said Kathy Bostjancic, an economist at Oxford Economics, a consulting firm. "While we share the Fed's view that this isn't the start of an upward wage-price spiral, we look for inflation to remain persistently above 3% through mid-2022."

The latest inflationary data makes it even more likely that the Fed will soon begin reducing its $120 billion a month in bond purchases, which are intended to keep longer-term interest rates low. Most analysts expect the Fed to announce such a move at its next meeting Nov. 3.

Higher prices are also outstripping the pay gains many workers are able to obtain from businesses, which are having to pay more to attract employees. Average hourly wages rose 4.6% in September from a year earlier, a healthy increase, but not enough to keep up with inflation.

One good sign in September was that prices fell or moderated in categories that had been initially pushed much higher by the pandemic. Those declines kept core price increases from worsening.

Used-car prices declined 0.7% last month, the second straight drop, after costs soared over the summer as consumers, unable to find or afford new cars, turned to used instead.

The costs for hotel rooms, car rentals, and airline tickets also all fell last month, as the delta variant spike in covid-19 cases limited travel plans. Car rental prices had shot up over the summer after many companies sold portions of their rental fleets. Clothing prices fell 1.1% in September, providing consumers some relief after increases earlier this year.

New cars, however, are growing increasingly expensive with costs rising 1.3% in September, and 8.7% compared with a year ago. That is the biggest 12-month increase in new car prices since 1980. A shortage of semiconductors has restrained vehicle production and left fewer cars on dealer lots.

Prices for household furniture, which has faced major shipping delays, jumped 2.4% in September alone, the biggest increase since 1988. Over the past 12 months, furniture costs have soared 11.2%, the most since 1951.

The cost of shoes rose 0.5% in September and have jumped 6.5% in the past year. Children's shoes are up 11.9%, a record-high gain in data that stretches back to the 1950s. Most shoes are imported and are likely caught in supply bottlenecks.

Restaurant owners are paying higher salaries to lure workers who have become elusive in the pandemic, and they're paying more for food. The cost of a meal at a full-service restaurant has jumped 5.2% in the past year, an unprecedented leap for as long as records have been kept.

Gasoline prices jumped 1.2% last month and have soared more than 42% compared with a year ago. Electricity prices rose 0.8% in September from August. Natural gas prices rose 2.7%.

Housing costs also rose at a strong clip, as builders say they cannot find all the supplies and workers they need to build new homes as quickly as they'd like. Rents rose 0.5% in September and a measure of home prices climbed 0.4%. If sustained, those increases will put significant upward pressure on prices, as those two measures account for nearly one-third of the consumer price index.

Inflation is far above the Fed's target of 2% annually. Chairman Jerome Powell has repeatedly said that the price gains should "abate" next year, bringing inflation closer to the target.

Raphael Bostic, president of the Atlanta Federal Reserve, joked Tuesday in separate remarks that "transitory" is now seen as the equivalent of a curse word at the Atlanta Fed. Bostic said the price spikes mostly reflect the pandemic's impact on supply chains and they should eventually fade, but it will likely take longer than many Fed officials initially expected.

On Wednesday, Biden moved to address costly traffic jams in the nation's freight-moving system, convening a virtual industry round-table and speaking at the White House. He announced that the Port of Los Angeles would "begin operating 24 hours a day, seven days a week" in a bid to clear bottlenecks.

Ports in Los Angeles and Long Beach, Calif., account for 40% of all shipping containers entering the U.S. As of Monday, there were 62 ships berthed at the two ports and 81 waiting to dock and unload, according to the Marine Exchange of Southern California.

Information for this article was contributed by Christopher Rugaber and Josh Boak of The Associated Press; by David J. Lynch and Rachel Siegel of The Washington Post; and by Jeanna Smialek of The New York Times. 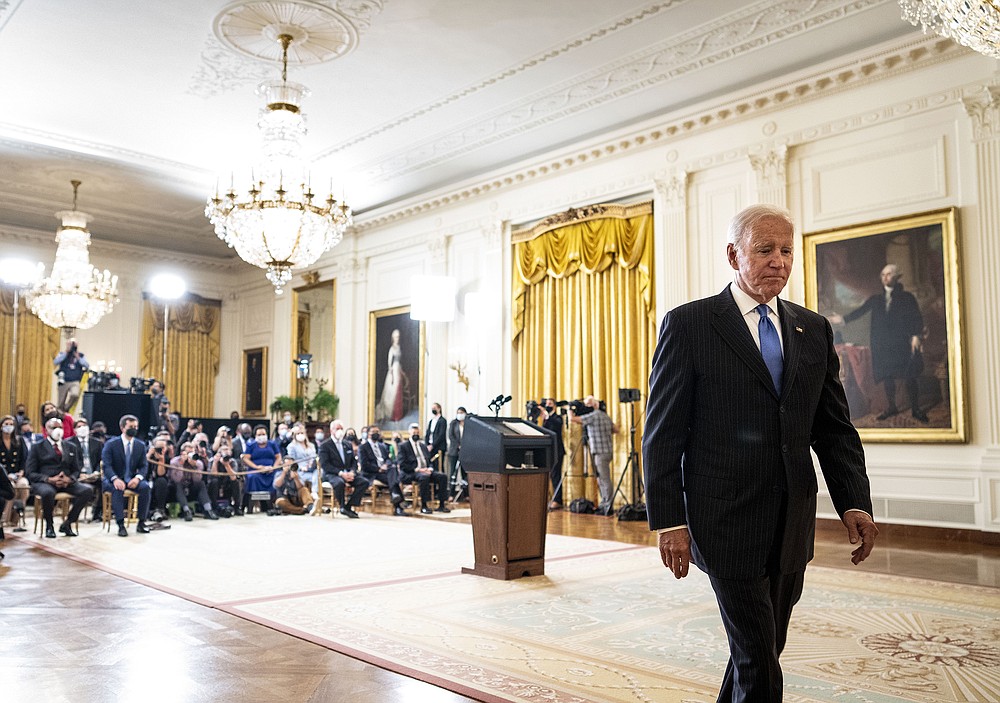 President Joe Biden leaves the East Room of the White House on Wednesday after announcing plans to clear the nation’s backed-up freight-moving system. He said the Port of Los Angeles would begin operating 24 hours a day, joining its counterpart in Long Beach. The ports together account for 40% of all shipping containers entering the United States. (The New York Times/Doug Mills) 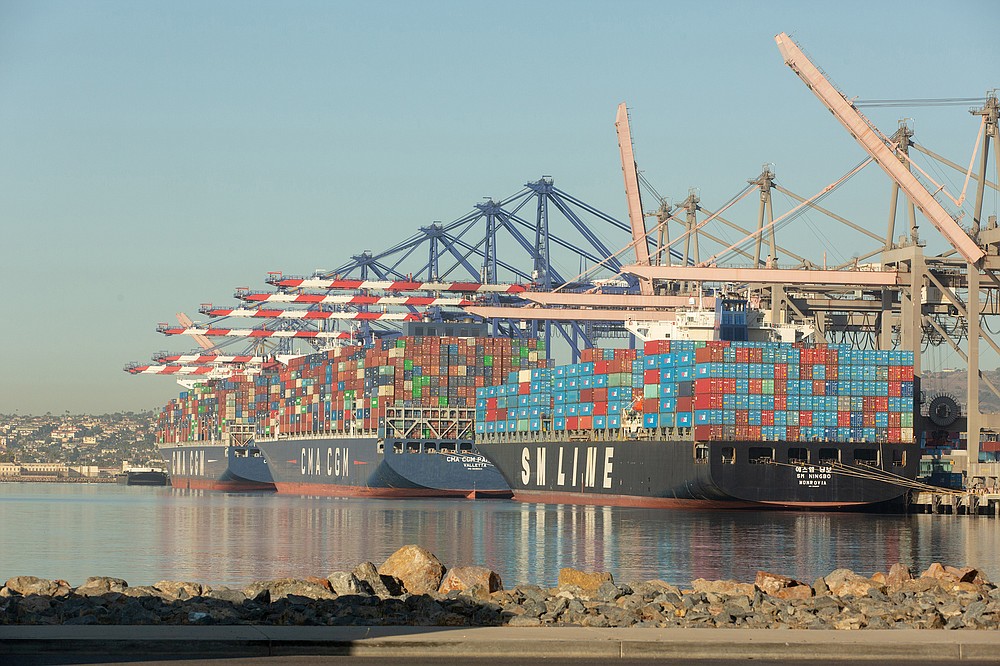 Container ships wait to be unloaded Wednesday at the backed-up Port of Los Angeles. (The New York Times/Allison Zaucha)